I'm SO Stressed Out

This is apparently the week that is trying to kill me. If I'm not drowning in a bottle of whiskey soon it's going to be a miracle. Actually I could really go for a nice drink right now and it's only 8am.

It all started on Tuesday when I had my review for work, which went fine but I was very disappointed that I didn't get a raise and I felt like they were mocking me when I asked about them helping to pay for some college classes. Which by the way I never would have wanted to take on my own, I'd only be taking them to satisfy them.

Tuesday was also payday and our bank account was a little low so I left work a little bit early (since I was in a bad mood anyways) and stopped by the bank to deposit my check then went home and got the kids. When I got home I was checking my bank account online and noticed a weird charge for $89 to a gas station casino place in Nevada. I sent Scott a text and asked him if he knew anything about it (you know how sometimes you buy something and it gets charged through somewhere different). He said no so I called the bank. The bank cancelled out his card, since that was the one used to make the purchase. I called him and told him what had happened.

After work he went to the bank and deposited his check (inside) and then went and talked to them about getting a replacement card. When they were confirming the address they had an address with a C/O someone someone and a different address. Which was OMG RED FLAG RED FLAG something is freaking going on!?!? Sooo then they froze our whole bank account.

At this particular moment in time I was at the grocery store trying to buy toilet paper and water and my card was declined. Lovely. Had to use a credit card to pay for it and went out to my car and called the bank and was being transfered to the fraud department when Scott was calling me over and over but I kept ignoring it because I was on hold. Eventually I just hung up and called him and he told me what happened.

Trevor was at baseball practice during all this time so when I went back to the field to wait for him to finish Scott calls me back again and says he recognized the name that was on the account. I swear that man has a memory of an elephant (except when it comes to putting his dirty clothes IN the hamper). The name was a lawyer that we had used 7 years ago when we filed bankruptcy. We've had no contact with this person for 7 years and we had paid him in cash so there would have been no reason for him to be on our account.

At this point I'm totally freaked out. I called the number of the lawyer's office and the message machine says he's going to be out of town for a few weeks. I'm thinking, um yeah in Vegas with our money! I attempted to go to the police department but the lobby was closed. When I got home I called the police department and they told me I had to call the sheriff because we don't live in the city limits. I called the sheriff's office and talked to someone and just a short time later there was a sheriff at the front door to take our report. (wow!)
So I give him all the information and when we are done he asks Scott if he's Howard's brother and he's all yeah, I know who you are! Such a small world! They used to race RC cars together years ago and the sheriff's dad and my dad used to work together. Hopefully all that means he will work harder on our case ;)

So Thursday morning we get up and go to the bank to open a new account. Instantly there is a problem because guess who just had a birthday? And guess who's driver's license expired on her birthday? And guess who can't open a new account without a license with an expiration date that hasn't actually expired? Why yes! Yes, you are right. That would be ME. The one who pays all the bills and is in charge of all our household expenses. I paid for my new license, it just hasn't shown up yet.

So the banker says no worries! We'll just open the account in his name and then you can come back later (30 days) and we'll add you on.  So after we were all done with opening the account I decided I might as well take care of this now and went down to DMV to see if I could get a paper temporary license with a a date on it.

This was the line when I got there. 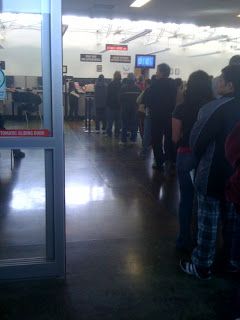 Surprisingly it only took about an hour and I had my temporary license. I went back to the bank and got all added onto the account.

After work I stopped to get something for dinner (I really need to go grocery shopping). Not too long after dinner Trevor started crying that his tooth was hurting really bad. I gave him some motrin and after about 20 mintues he finally stopped crying. So now I need to see if I can get him in to get this bad tooth pulled out. It's a baby tooth and before they wanted to do a baby root canal on it but I can't see paying all that money on a tooth that is probably going to fall out in the next year. PLUS the children's dentist that we went to before was sadly disappointed when they found out we didn't have medical to pay for everything or a big fat credit card and never called me back with a payment plan. So we'll be trying a new dentist. I need to call them in a few minutes. Thank God he wasn't crying abut it this morning. I hope he can make it until I can get him in.

To add to all this I have a tire that keeps losing air on my car. Trevor forgot the movie he wanted to take to school today and was totally pissed off at me this morning for not going back to get it. Jessica is doing her usual drama and I kind of picked a fight with Scott yesterday. Oh and did I mention that I'm having a party for Trevor on Saturday and have a dozen ladies coming over for bookclub on Sunday?

OMG!! WOman! WTH! That is way too much drama..think you deserve a cruise...say um Nov...whatya think???

OMG. Seriously. You need to just put yourself in time out and sit in the quiet. This whole thing FREAKS me out because Matt and I had to do bankruptcy 2 years ago and it just makes me nervous. Keep us updated- I'm interested to see how this pans out.

oh the joys of parenthood eh?
I hope Trevor's tooth is out now and not hurting him anymore.