Today was Trevor's actual birthday! The boy is 8!! Crazy! My kids are all growing up so fast. We celebrated the day but doing the usual. Going to school, Jess had a dr appt for her sports physical and then we went to dinner at Applebees. 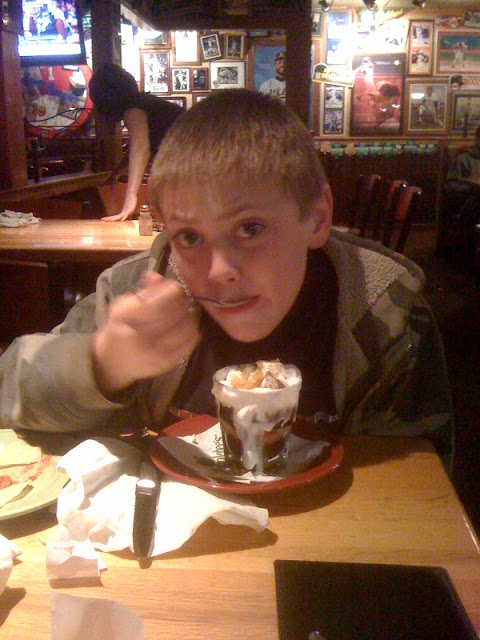 The waitress totally forgot about his birthday dessert until Jessica reminded her for us. She's all, umm it's his brithday and he's feeling kind of sad (we had watched them sing to another person and bring out a sundae when we first got there). She was like OMG I'm so sorry I totally forgot. So thanks to his sister he got his birthday sundae :)
When we were almost ready to go Jessica was messing with her phone and while we were walking out she said that someone had left her a crank call message. Someone called her phone (blocked their number) and left a message calling her a fat bitch and saying a bunch of other nasty stuff.  Our night instantly went from being nice and carefree to being upset. I can't believe how mean kids are. And the balls! I could never think to do that to my worst enemy. I don't have ANYONE enough to be so mean.
It just goes to show, they can preach their "anti-bullying" campaigns all over the place but it doesn't do any good. Bullies start at home. Someone has obviously done something to this child to make him so mean. I still hope he walks in front of a bus. Whoever he is. What a jerk!
AND then on a kind of weird note, Jess just got out of the shower and she's talking to a friend of hers. The friend (17) just found pot in her mom's purse. Way to go Mom!!
Pin It
Posted by Julie H at 10:03 PM