Run Run As Fast As You Can!

Today on my lunch a co-worker and I went to a running store. I had them analyze my feet to see what kind of running shoes I was going to need. I thought this whole thing was going to be a lot more complex than just stepping on this little pad. It instantly brought up color images of my feet. AWESOME. Wish I could have had a print out. I don't know why that kind of stuff makes me so excited. I must have a little inner geek in me.

Anyhow, I have a high arch and have and am an under-pronator (which means you roll your foot inward when you step). The sales guy showed me all the shoes on the wall (least expensive $80) and I kind of just stood there and looked at them for awhile before I asked to try some on. Then he just brought out some random shoes that were in my "area" of what I would need.

I really liked these ones. Although they are kind of ugly but my co-worker said you aren't supposed to pick them according to how they look. Ha! I have no idea how much they were in the store but it's my goal to find them cheaper. Or something like them. Unless I decide I want them NOW and just go buy them after I get my paycheck. That might happen too.

After work I finally got Jessica's package mailed off and picked up some more protein powder. And some chia seeds to try in my protein shake. We'll see how those go tomorrow.

Then it was off to the trainer where we worked on my shoulders and abs. It's kind of nice when you are working in front of a mirror and you can actually see muscles in your arms. Sadly there is also some skin just hanging out there on the bottom of my arms but not much I can do about that without a plastic surgeon. After my work out with the trainer I decided to try my couch to 5k on the treadmill.

Things to remember for next time:

Here's my fantastic picture after my work out. I had already splashed some water on my face to cool down before I remembered the "sweaty pic" although I don't sweat much so it's more of a "tomato red glistening" pic. 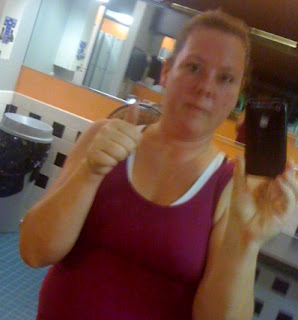 I'm almost half way through the program!! I didn't walk at all and it was a lot easier on the treadmill (although my shins hurt and that doesn't usually happen).

Next up is week FIVE. During week five it starts to change each time you do it. So left to right that is day 1, day 2, day 3.


I feel like Bob The Builder. "CAN WE DO IT?" YES WE CAN!" or die trying right? (actually I just looked it up and it's "Can we FIX it, but whatevs!) 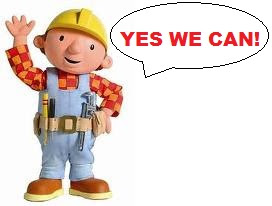 I think it's great that you are working out! I started getting into shape by playing softball...almost constantly.

You should use Dora the Explorer as the mascot after each workout.

WE DID IT, WE DID IT...blah blah blah then they say it in Spanish...lol.

chances are that new shoes will help your shin problems. also stretching. Try walking around on your heels for a while to stretch out your shins before running. I had to run 3 min stretches today. That was hard! Just bite the bullet and buy your first pair in the store then after that you can get the same exact pr on line each year (they update them but usually the name stays the same and they just add a number or letter)
Laurie