Another Day another Unfinished Project and Such

Monday after work I went "to town" to pick up a few things. First I went to Target to get laundry soap, (yeah fun!). I tried to use the restroom there but someone was cleaning it. It's ok, I can hold it.


Next I went to Michael's in the same shopping center to see if they had all the little things I needed so that I wouldn't have to drive to Manteca. I went straight to the restroom where 2 women were talking and I about died of the smell. I stood holding my nose waiting for them to exit the stalls for a couple minutes and then went and waited outside the actual door. Waited...waited.. Then I was like well I'll just grab a couple things that are kind of in the area. I did and then really couldn't wait much longer so I went back. Yep, they were STILL in there. OMG! So I looked around real quick and went in the men's room. Shhhh don't tell. It actually smelled a lot better in there too haha.


They didn't have everything I needed there so I had to go to JoAnn's in Manteca anyways. But FIRST, I might as well stop and check out Goodwill real quick since it's in the same shopping center. Usually Goodwill is thinking they are all boutique now and charging way too much for stuff but I someone had been really nice with the pricing stickers! I found 6 of these plates and they were in bundles of 3 for 99 cents. NICE! I was thinking they looked "vintage" so I pulled out my phone to see if they sold for anything. They are going for around $30 for 6 plates so I bought them to resell. (this is not my auctions) 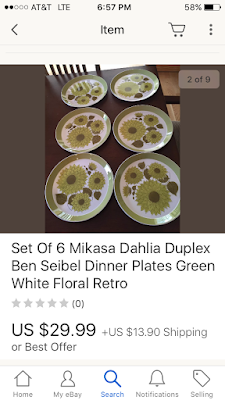 There was a few pieces of Partylite there but I looked them up and they didn't really seem worth the hassle to sell them (small profit margin) so I left them there.

Next I finally went to JoAnn's and got a few little things (mostly I needed hook & eyes to put at the top of that little dress I made since didn't put the zipper up high enough). While I was there I looked for some Shopkins fabric like I had seen at WalMart. I finally found it and whew it was expensive but I had a coupon on my phone which made it about the same price as WM without having to go there haha. I got the cute stripe for the side panel contrast.

I'm thinking if I just coupon the fabrics for each pillow (since they do so many coupons on line and text and stuff now) it won't be quite so spendy. Fabric sure did get expensive in the few years I took off from sewing. That's kind of why I like the whole vintage rescued fabrics from the thrift stores so much lol. 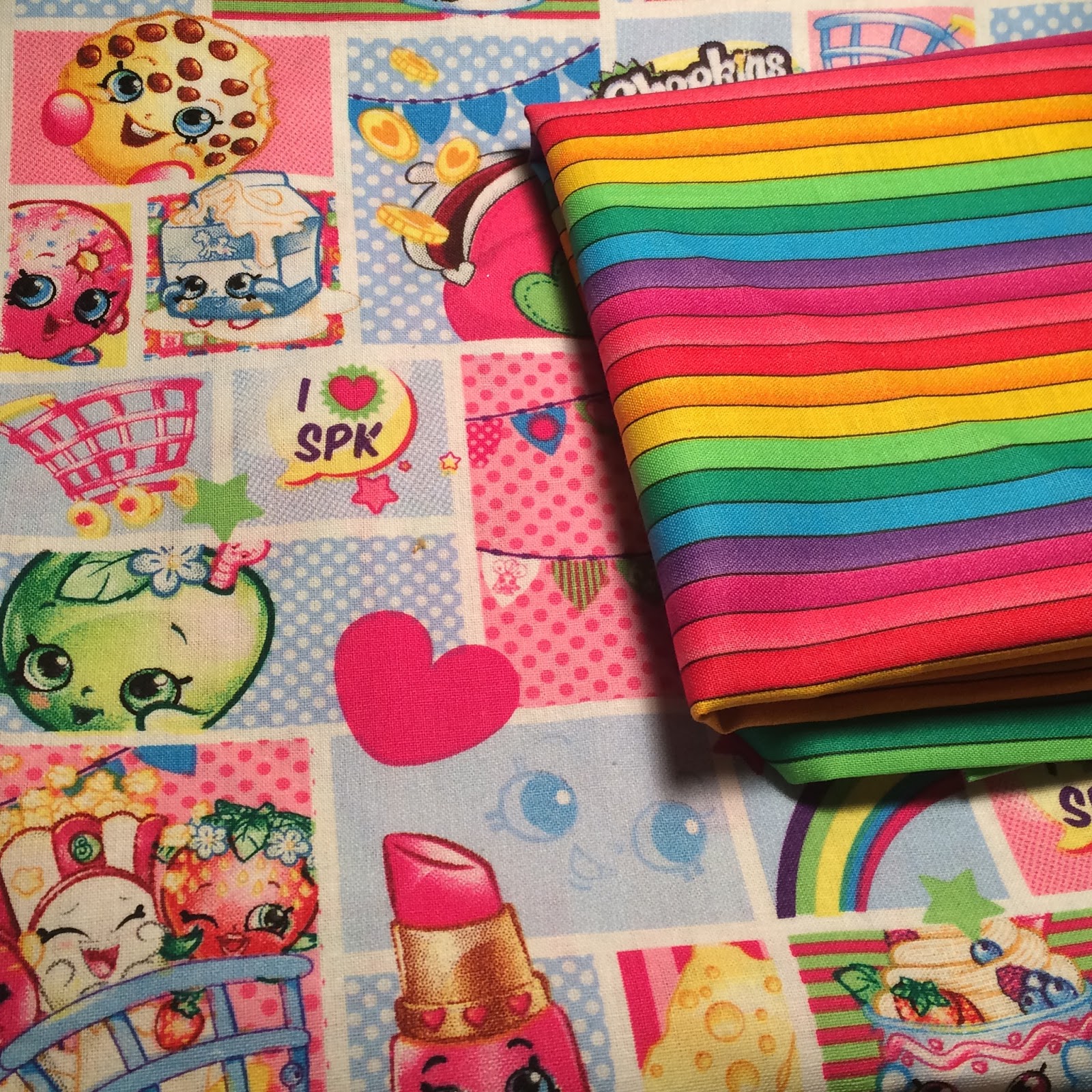 When I got home I threw some dinner together real quick. It was much prettier in the pan. 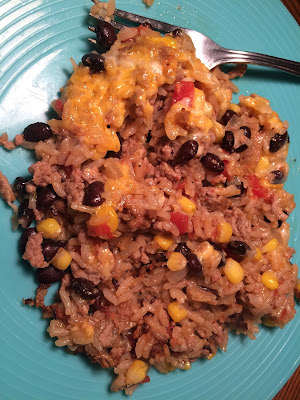 Next up! Sew up the little bag that goes with the dress outfit. I had this stuff cut out but needed some interfacing. I probably have some out in my shed but I wasn't going to go out there and search for it (oh for the day when I have a craft room!)

I think I did an ok job but I did mess up one of the handles a bit. Oh well it's for a little one. Good enough! Next time I'll triple check that before I sew. 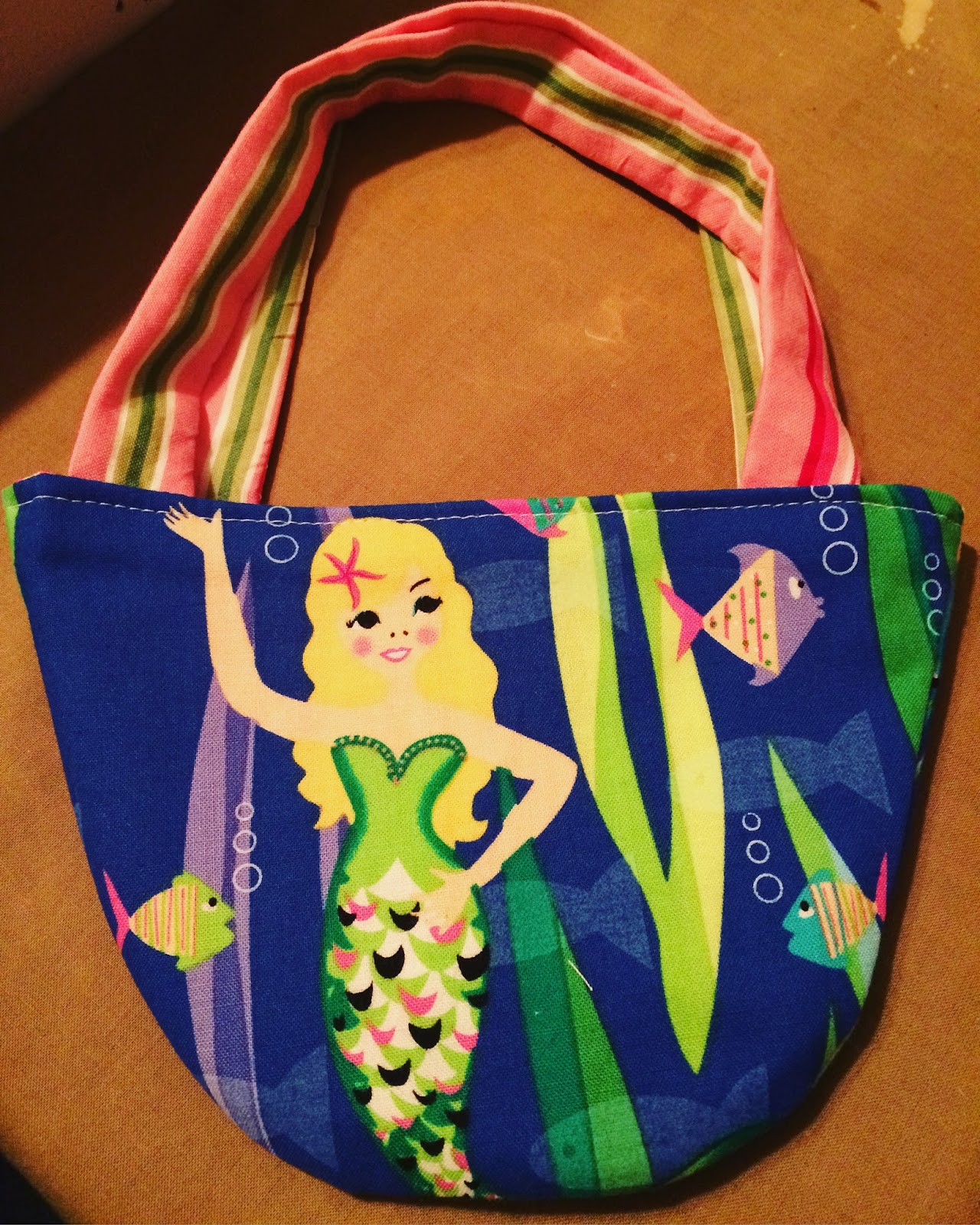 Scott had 2 pairs of jeans that recently tore in a "not so nice" place and I had been trying to decide what to do with them besides throw them in the donate bin. I did a little Pinterest pinning and got the idea to make a garland/bunting out of them. I was trying to decide how I wanted to join them together and ended up using some miscellaneous red buttons I had. I ended up with two of them and I think they turned out cute. I'm going to put them in my Etsy shop after I take some better pictures. 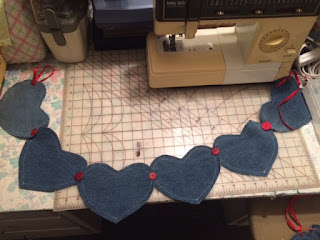 As I've been going through things I have been kind of stacking them on the side of my room and it's starting to look like quite the tower. I have a bunch of fabrics I had picked up to sell (or use) that I need to take pictures of. It's been kind of fun to go through stuff I had picked up before and then just stowed away when life got in the way.