Well today is the Saturday in between craft shows.

I need to be doing some sewing this weekend.
Today is also Trunk Or Treat.

Today is also where I still feel sick and think I'm working my way over to bronchitis. 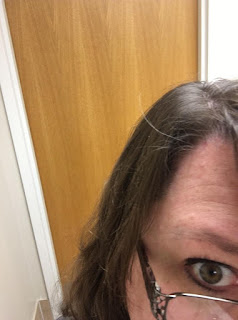 Why do the gray hairs have to go the wrong direction?

I swear it's the weirdest thing. When I was laying in bed Tuesday dying I thought "that's odd, my chest kind of hurts". The rest of the week I've been doing a little cough cough. Yesterday I started using an inhaler.


I picked Trevor up after his after school activity and then we went to Wal Mart, Target and a couple stores in the mall looking for this card game we wanted. I noticed the shoe store we always go to "Famous Footwear" is no longer in the mall. It's kind of scary how many stores are empty in there now. That store is one of the only reasons I go in that mall. He found the cards he wanted at Target but they only had the really expensive pack so he didn't get them.

I totally had to tease Scott with this disgusting egg slime stuff. I LIKE eggs and I thought it was disgusting. He is super grossed out by eggs unless they are totally mixed with no whites showing AT ALL. I sent him this picture and told him I found him a new toy. He was just as grossed out as I was hoping he would be haha. 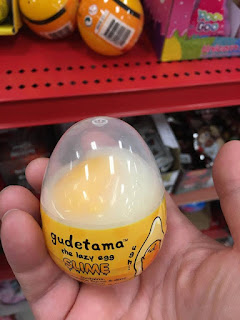 Then we went to the grocery store and I was so exhausted I just got a few things ($185). I need to make a menu and a real shopping list so I will actually cook, although my stomach keeps getting upset when I eat much of anything so I'm scared to eat a lot of stuff.

Now I've went to the opposite end of the spectrum where I'm like maybe I need to drink some coffee and eat some fruit..

I ended up going to lay in bed as soon as we got home last night. It was probably about 8pm. Needless to say I have no Trunk or Treat ideas and never got a costume. I'm thinking of either just wearing cute Halloween leggings I got last weekend or looking for the costume I wore a couple years ago out of the shed if Scott will get it for me. Also if one of the kids decorates their car just hanging out by them to hand out the candy. I'm supposed to be helping with the event too so I should really at least dress up a bit.

Alrighty! Stay tuned to find out if I pulled my head out of my ass today or not haha. No plans for tomorrow whoopie!

I hope you feel better soon!!!! That egg is DEFINITELY disgusting!!!! Enjoy your Sunday of nothing - I live for those days now! HA!