How's that New Years Plan going for you?

I know, I know, I'm a little late but I finally feel like blogging. What did you all do to ring in the new year? Can you imagine having your own ball like Snookie there? I don't watch her show but I'm thinking that's pretty funny! 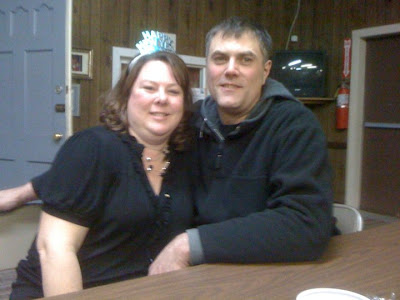 We ended up going out at about 9:30, down to the bar to meet up with my friend and her boyfriend. We were waiting for them to get out here, sitting here all ready to go. I actually had to wake Scott up when it was time to go! How's that for a sign that you are getting on in years.  In his defense he WAS sick (sorry I got you sick honey!)
So we ended up going down to the bar and having drinks and doing a little dancing. We hung out in the clubhouse towards the end of the night. They had had a dinner down there and had some 90 year old guy DJ'ing. He played a few songs that were good enough to dance to.
Check out this hilarious hat! They had a bunch on the tables. 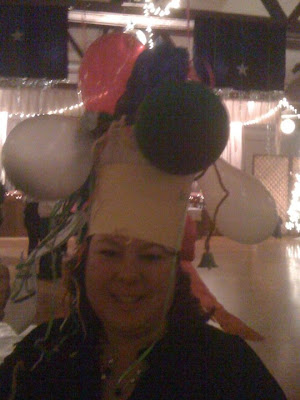 Oh and I'm no longer a virgin. A TEQUILA SHOT virgin that is!!
On that note the first day of the new year was brought in with asprin and coffee. I ended up going shopping with my friend from work. That was fun but I was so tired when I got home. I laid down (I was looking up if it as layed or laid and ended up at the urban dictionary and defintely it was not LAYED) to "read" and finally got up the next day at around 8 in the morning.

Sunday Scott went down and got new tires for Jessica's car. It's so nice that she can drive herself around now. I just try to block out all that stuff that "could happen". She's been spending a lot of time looking for a job. Let's hope she gets one so shc can have some gas money!

Monday was work. Met up with my friend who was visiting from Texas for lunch.

Tuesday I took off work to take my friend from Texas to the airport. We got there in record time. The airport is really close to where Scott works so I went to meet him for lunch. It was only 11 but he starts work pretty early. His boss was there and apparently wasn't too happy about him leaving work early to go to lunch (I'm sure waiting one hour to go to lunch really would have changed the guy's whole day). Of course he was nice and polite to me. That night Scott called me at about 6 to tell me he was STILL at work and had at least another hour to go because his boss wanted him to finish up a project. While he was on the phone with me I could hear his boss in the background questioning him about who he was talking to on the phone. Seriously? What a jerk. He got home just in time to play with the kids for a few minutes on the Wii before they had to go to bed. Needless to say he was exhausted this morning. Poor guy!

So how is everyone doing on those New Years Resolutions? I pretty much forgot about them already and it's oh only the 5th?? Well not really forgot just haven't had time the drive to put them into motion.Pin It
Posted by Julie H at 2:45 PM