I'm feeling much better today. Thanks for all the nice comments and emails. I think I have a bit of the PMS mixed in with the sads.

Yesterday was quite the interesting day. I started off the day by going to Starbucks for a sausage breakfast sandwich. I'm so addicted to those. They aren't even all that great, but for some reason they always sound awesome in the morning when my stomach is grumbling on the way to work. I should really just get up a little earlier and make my own at home. I could probably buy all the ingredient for the price of one or two and have them for a week.

This was my view from the drive thru.

**insert picture of crashed car with airbags deployed and ambulance that the computer refuses to load::


Yeah, count your blessings that your day didn't start off THAT way.

Work was uneventful, I've been working on making packets which is basically just copying everything in the file to send to the client for "their records". Which really means just wasting a bunch of paper and postage so someone can throw the piece of mail into a box somewhere. I stayed and worked an extra hour since the kids are getting out early all week and were already home.

I was almost home when Jessica called. She was stuck at Applebees with two friends. They had went out to eat after lunch. She had told them that she could let them borrow a couple dollars. Apparently they thought this meant that she would pay for all their food and so when the check came and she only had the $20 I had gave her in the morning they were stuck. At first I told her that those girls would have to call their parents and get some money. Apparently that couldn't happen so I had to drive over there and give her money so they could leave. She said that it was so embarrassing and I'm glad. Who goes out to eat expecting someone else to pick up the tab for you? What a bunch of leaches. I told her I expect them to pay me back and that if they don't have any money I have some yard work they can do. Not that I really think that will ever happen.

After I rescued her I looked at the clock and it was still before 5. I went downtown to do something really embarrassing. I got my wedding ring cut off.

Yes, you read that right. I've been married for almost 18 years and I've never had my wedding ring sized. Even though my weight has fluctuated quite a bit over that time period, I've always been able to get it off, maybe with some coaxing, but lately it has just got too tight and impossible to get off. It as starting to feel like a vise choking my finger. When the jeweler cut it off (family friend) I felt a tremendous feeling of relief. How weird is that? He said to come back in about a month and we'll get my ring resized and fixed up. So for now my finger looks like this. 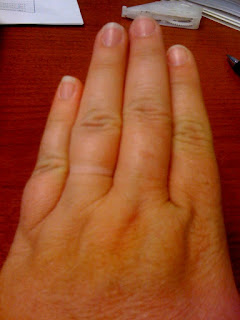 Yes I have huge fat hands. I've always had very large fingers, even as a child but now they are "fat" on top of that. Lovely.

After getting that done I ran home to get Trevor for baseball practice. I had just enough time to water my vegetable garden real quick, help him put is cleats on (he had an hour to get it done himself, I swear that child can take all day to get dressed) and then drive back to town to take him to practice.

While he was at practice I hung out in town since Scott wasn't going to make it in time to pick him up. To waste some time I went over to OSH and looked at the plants. I ended up buying one, which was on a table with as sign that said $3.50, but wasn't actually on sale and was really $5.99. Does anyone else get totally annoyed with things like this? I even went back to look at the sign after I got rang up to make sure I read it right. Which of course, I didn't read right. The sign was for "Premium 1 gallon annuals". I bought a 1 gallon perennial, which is just about all that was on the table. I wonder how many other people got suckered into paying more for something they might not have bought if the sign wasn't there? I was tempted to return it but I did like the plant so just left. Annoyed.

Then I of course had to get gas. Woohoo it's under $4.00 if you go to the right place. I went over to the Safeway gas station because they have a good price and it's in the same parking lot. I swear that place is a test place for people's sanity. There are 4 driveways to get in there, with 2 pumps on each "row" probably about 10 across. So you have people coming from all directions and driveways trying to find an open space, moving to the one they think someone is leaving, flipping around to back in, etc. And then their pumps computer system is so agonizing slow. It's really almost worth driving across the street to Chevron and paying an extra dollar or two.

After that over to Starbucks (eek 2x one day!) but this time for a frapp because I really wanted an alchoholic beverage but that wasn't possible. I got through the drive thru just in time to get back to pick up the kid. Dinner was something not healthy picked up at another drive thru and then thank God we were home. I went over to talk to the neighbors for a few minutes (hour), came home and read my book.  It felt like a super long stressful day from 4:00 on.

If you made it though all that, don't forget I'm giving away another book on Friday! All you have to do is leave a comment here. So far there is only one,! You could win!Pin It
Posted by Julie H at 9:28 AM

I have fat hands too. size 8 ring finger, always have, except when I was pregnant it was a size 10. My SIL who weighs nearly 300 lbs has lovely delicate hands with a size 5 ring finger. Go figure!!

I think all retail stores have a conspiracy with having things on "sale" only to find out once you get to the register that it was something else. Because more often than not we will buy it and their little plan works - that happens to me all the time, especially at Hobby Lobby. Though I can usually manipulate my way to the price I want there if I get the right kind of checkout person. (o:

Glad you're feeling better today. I'm PMSing too this week and it always has an affect on how I'm feeling about life in general.