Anyone else feeling a little bit lost this morning? Poor Scott had to go to work. No Holiday day off for him. I guess we should just be grateful he has a job instead of complaining. I guess. :) Trevor went home with my brother last night and the girls may never surface since Jessica has her laptop in her room and Melissa has her Kindle. First thing I showed Melissa was all the free books on there. I think they might eventually come out for the bathroom and maybe some food.

I've been walking around picking things up here and there and starting to make a spot of things to put back in the Christmas boxes. I'd probably be loading those up already if they weren't up in the rafters.

Here's a few pictures from yesterday.

Trevor was so excited to get Rayman Origins. We had got it from Redbox two times and he was sad everytime we had to take it back. 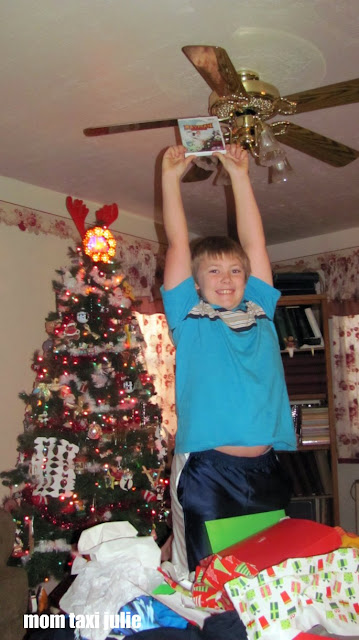 Melissa got a Kindle Fire and Jessica got a lap top. I promised I wouldn't post their pictures on here since we open presents the minute everyone is awake :)

Scott got me this nice seed starting kit and a gardening book. He included some seeds for his favorite thing, SALSA that we learned how to make. That's one way to get him excited about tilling my garden area I guess! 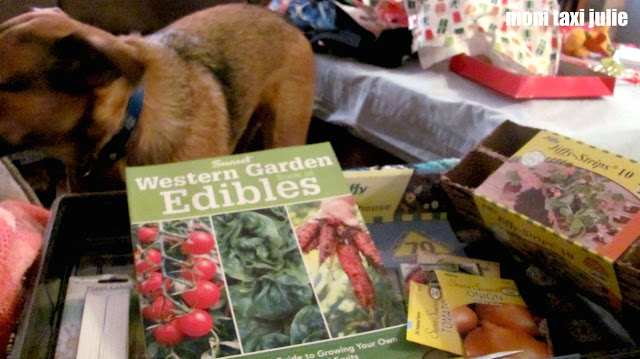 After we opened presents I cleaned everything up while the kids did whatever it was they were doing and then we went over to my mom's house. We were surprised we were the first ones there since they all live within walking distance. It was a good hour or two before my one brother made it over. I guess they get a pass since they do have a baby!

My niece Adrian came in with the most adorable PJ's, Minnie Mouse had and slippers. Of course we couldn't get her to put the hat back on and pose for a picture even with marshmallow bribes. That's Tinkerbell in the chair with my Mom and Mr. Wiggins giving her a sniff. 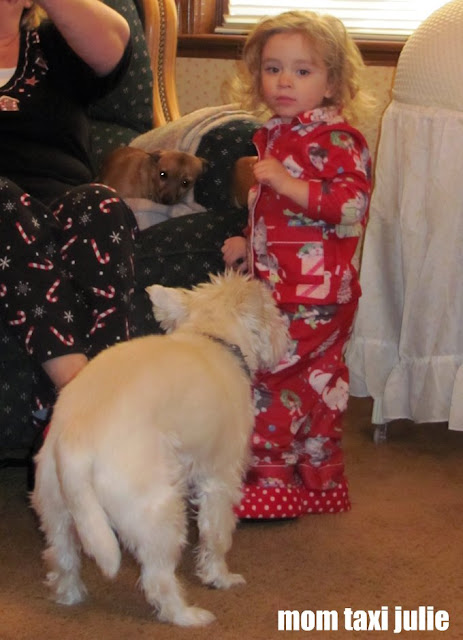 Here's my Mom's Christmas Mantel. She loves all things that light up, sing and move. She fills the stockings for all of us. I think that mirror started off belonging to her Grandpa (my great). I remember it being at my Grandma's house when I was a kid. 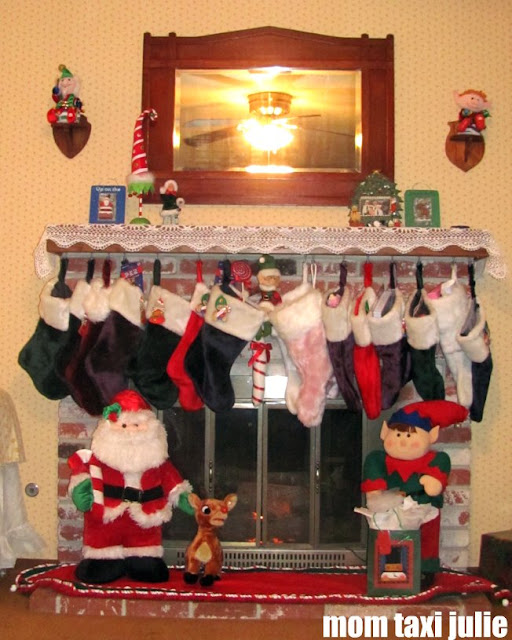 My Mom's tree. This includes the presents that I brought over and one of my brothers. When the other brother got here it was insane! That thing on the top of the tree moves around in a circle. It's Santa with his reindeers. 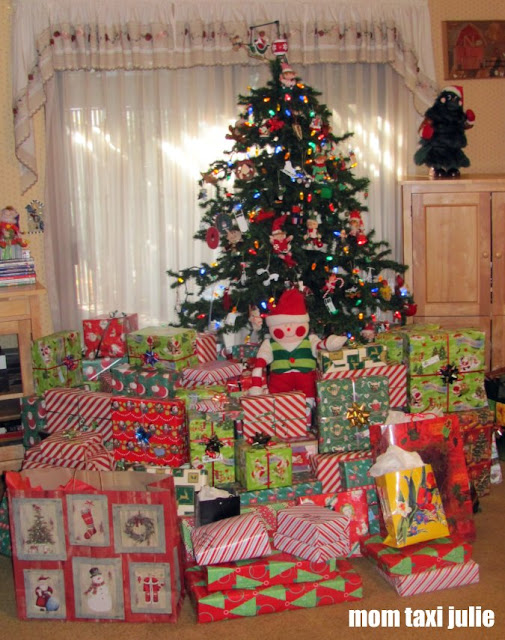 Mr. Wiggins hates everyone but me and my Mom. And maybe Adrian sometimes. He was almost sitting on my lap until him and Moe got kicked outside. They are two cranky old men. 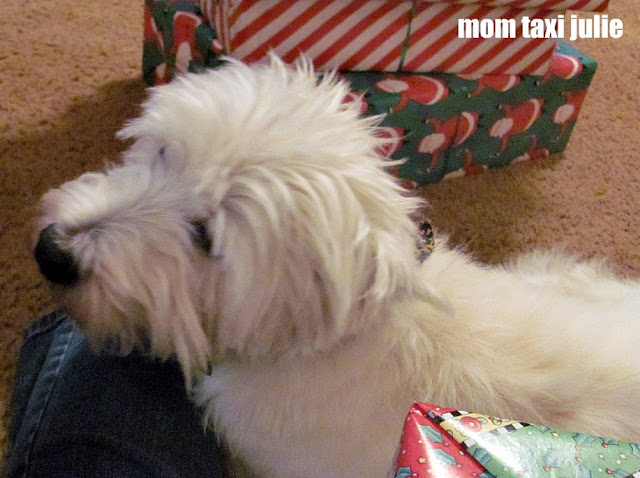 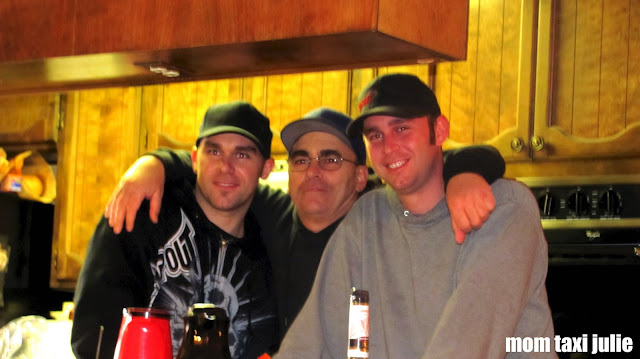 Anyone that wants a baby should spend twelve hours with one. It's non stop feeding, changing, hoping for napping and repeat.  Adorable but SO.MUCH.WORK. 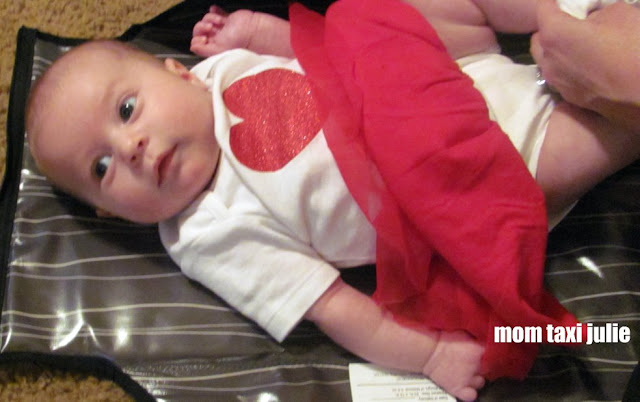 Here is the aftermath of opening all those presents. That's even with most of the paper picked up as we went. 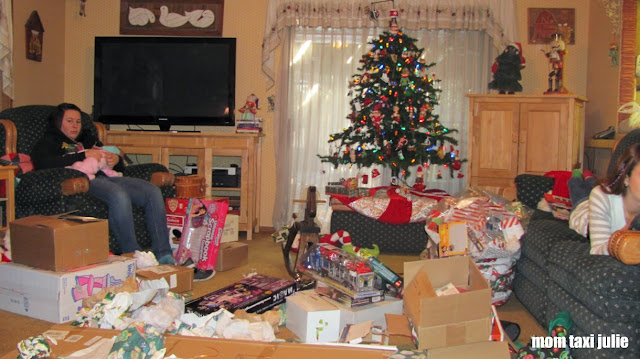 We had a fabulous dinner of prime rib, Italian sausage and meatballs in spaghetti sauce and lasagna. We had some other stuff too but those were the main events. I'll have to get my mom's pictures from at the table.

This house is on the way to/from my Mom's house. It's always all decked out for the holidays, what ever they are. They have so much crap going on it's not even really pretty, it's just all lit up. 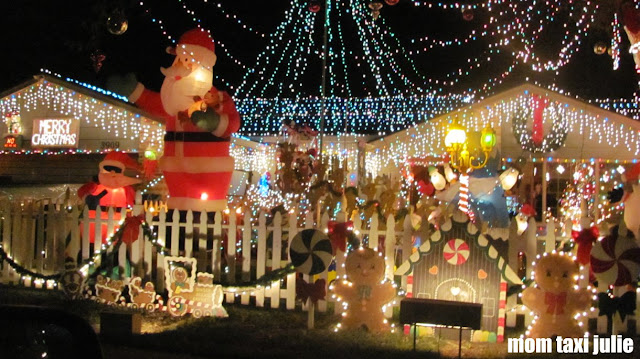 and this year their neighbor next door added this

I hope you all had a nice Christmas! I guess I should get out of my jammies soon!Pin It
Posted by Julie H at 11:41 AM

I can not stop laughing at the "DITTO" yard. That is beyond funny!!! So fun to get together with all of the family. That is one thing I do miss, holidays with the family. I guess we need to just set our own traditions..if possible. :O)

I'm so glad you all had such a wonderful Christmas.
I agree about that house, there is too much going on! Ditto is very funny.