I'm tired peeps! We finally had a really nice day today. Nice that it was on the first day of spring. I got my back flower/vegetable bed all cleaned out and planted all my big boy tomato seedlings. Hopefully they make it. I would have taken a picture but I was too tired.

I've been doing pretty good on my diet. I'm down about 13 pounds. I pulled out my next size smaller pants and wore a pair to work today. Sadly I mostly had capri pants one size down so I'm going to have to get more pants. I'm thinking I'm just going to try the thrift store because hopefully I won't be in that size for long!

The only bad thing about dieting is needing to go to the grocery store so much. We are always running out of everything. I need to make a trip tomorrow and get some salad stuff and more fresh veggies. At least once the garden is growing I can just go in the back yard and pick dinner!

The forecast for the rest of the week is good until Friday when it's supposed to rain again and then "chance" of rain all freaking weekend. I wish it was only allowed to rain during the week while I'm at work ;)

In other news, here's a few more recipes that I've tried this past week. My new favorite websites are Skinnytaste and Can You Stay for Dinner. Great food recipes and most of them have the calories listed.

I took a chance that my family would turn up their noses at this because it has coconut on it. I was pretty much right that they wouldn't REALLY like it. They ate it though. It was good with a nice sweet flavor and not too hard to make. 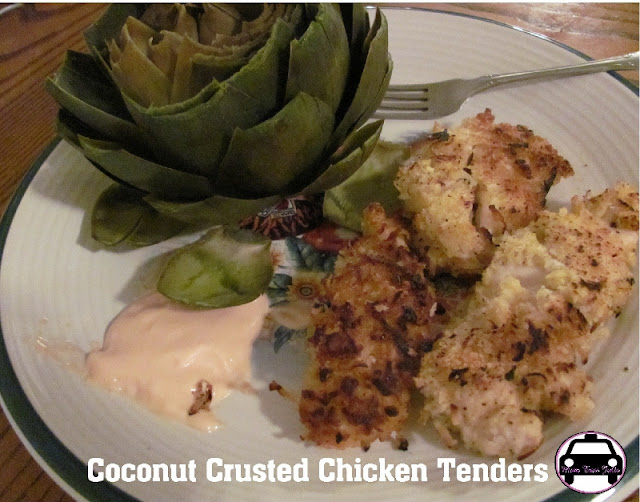 Winco has had artichokes for $1 each the last two times I've been in there. They are on the smaller size but 3 out of 5 of us love them.

Pork Chops with Dijon Herb Sauce So when I went to make this I didn't have any dijon mustard like I thought I had. I also didn't have any chicken broth left either. Oh and I didn't have any fresh herbs. I ended up using regular mustard, beef broth and dried herbs. It was ok. I think I need to try it will all the correct ingredients and a little thicker pork chop. 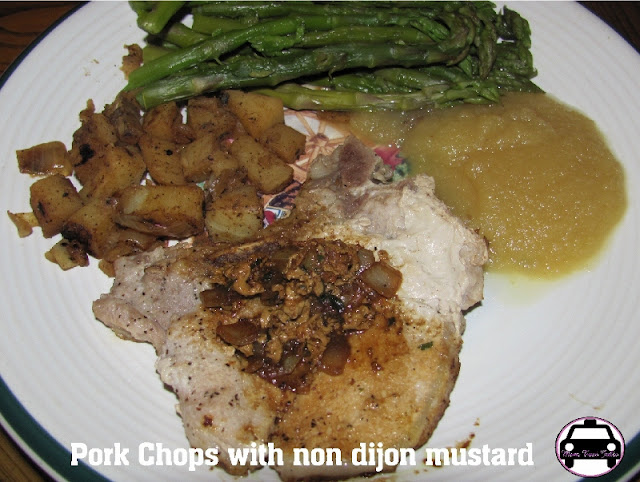 Funny thing about this next one. I was in the middle of making it when we had some drama going on. I thought the meat mixture was a bit watery, but it was coming out alright. When I was cleaning up a bit I realized I had forgot to put the breadcrumbs in with the meat. That would explain it! It turned out pretty good even though it didn't have the breadcrumbs in it so you could even leave them out on purpose if you are avoiding such things. 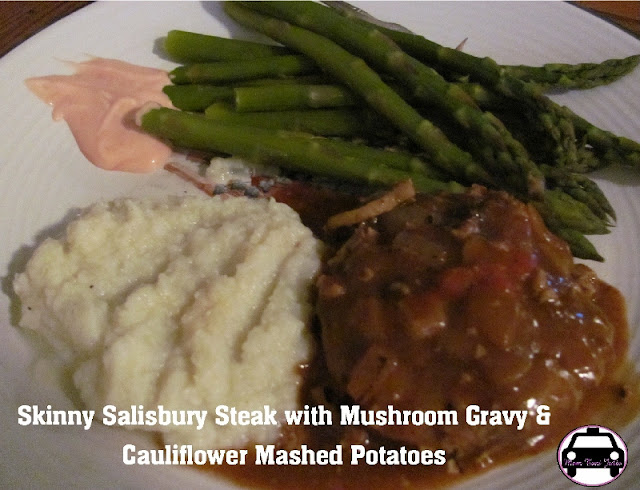 I attempted to make the skinny garlic mashed potatoes with non fat milk. I had my ratio off though and they were way too runny. I also didn't use a blender so that might have been part of the issue. I was getting short on time and didn't want to drag that out. They still tasted fine though. I still like the other cauliflower mashed potatoes I made before better.

I've got one more new recipe (realized today I need to give myself a lot of time to make it) and one more old recipe that I've made for this week.

Tonight I took what was left of the chicken cutlets and used those bread crumbs (they are whole wheat, pretty tasty!) I had forgot about and cooked them in my skillet with some olive oil. I forgot to take a picture but they were pretty good for something I just threw together. No left overs for my lunch tomorrow!Pin It
Posted by Julie H at 9:00 PM

do you have a Costco?
Best fresh veggies and fruit at such a great savings. And their meat is awesome and cheaper than a grocery store!

I'm telling ya I read you and I immediately hear my tummy growl.