Did you all have a nice New Years Eve?

We had made plans to meet with my friend Lupe, her sisters and their men at the VFW Hall for a prime rib dinner, all you can drink beverages and dancing.

In the morning I was thinking, hmmm do I actually have something appropriate to wear to this? I had 3 dresses in my closet, 2 more than I remembered that I had. One was too short, one was too summery and the other was too busy of a print. So I decided that I'd run into Ross when I took Trevor over to my Mom's house.

I took him over there and ran into Ross. I grabbed six dresses thinking that was all I could take in the dressing room (it was 8 doh could have grabbed 2 more) and then asked all my instagram friends to help me pick a dress. Thanks to my Fit Camp buddies I have a lot of fashionista friends on there! They are always great at offering me advice on clothes. It's like bringing all your best friends shopping with you.

Can I just say how awesome it is to grab 6 dresses in various sizes and NOT ONE was too small?? FREAKING AWESOME.  Here are the dresses I tried on (don't mind my mirror face, I suck at smiling and getting myself in the picture too!)

I look kind of muscular in this one eh? 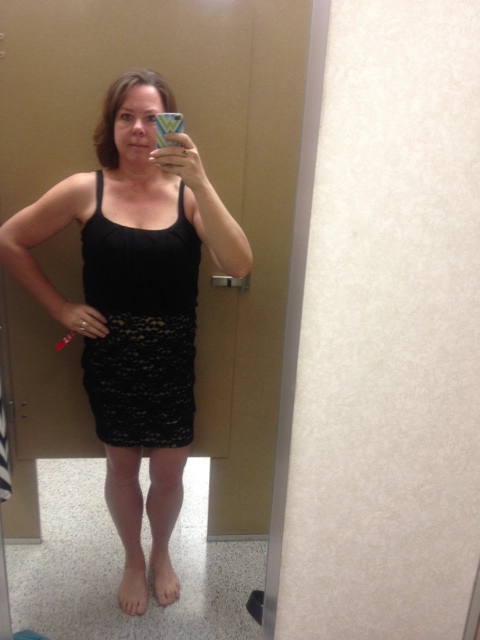 Size FOUR and zipped, think it looked better than the picture shows lol. It was black velvet with a belt under the bust. 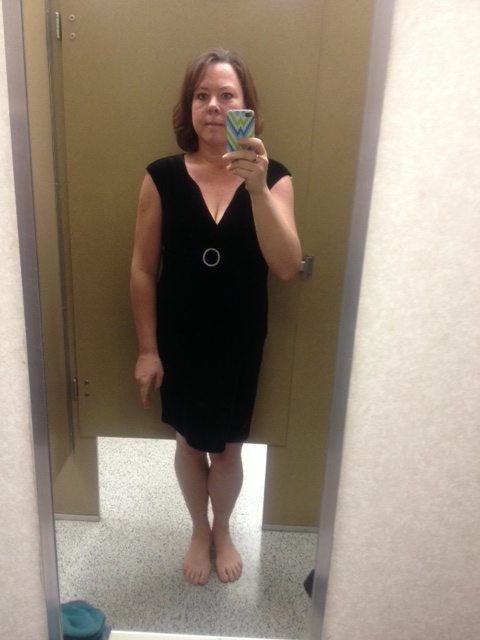 Ended up with this one 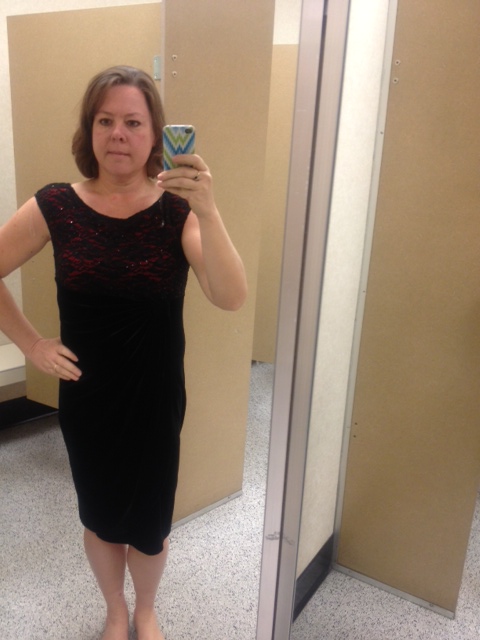 This one was really cute but not as dressy 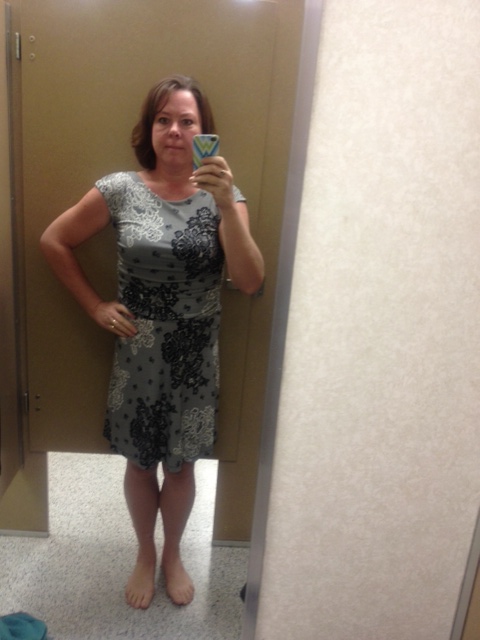 This one was glittery. Just putting it on glitter was floating all over. Fit good but that glitter would drive me nuts. Maybe for Vegas but it's probably 6 inches too long for there. 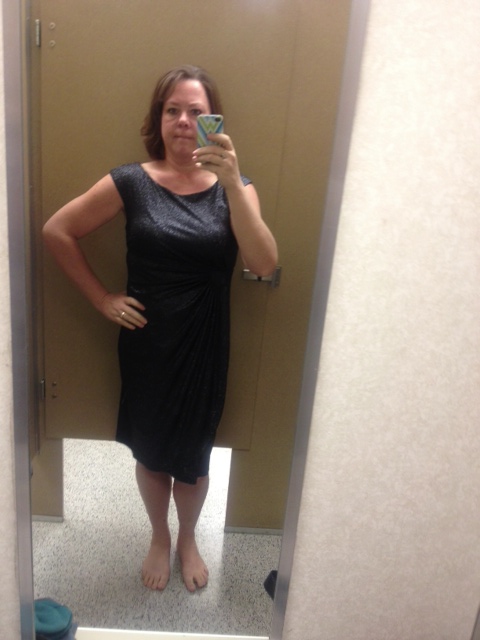 I could see my rib cage on this one. Weird how sometimes that happens. Lots of people liked it though! 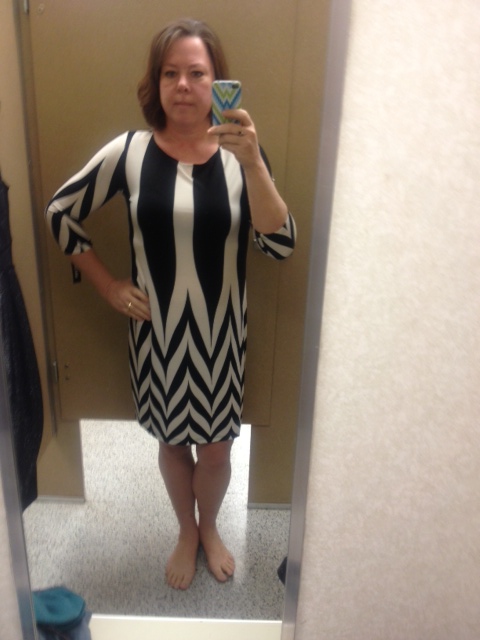 I ended up getting the one with the red on the top and black velvet on the bottom. I was tempted to buy a couple just because they were inexpensive! But I hardly ever go anywhere to wear a dress.

I also picked up a pair of shoes while I was there, new black heels, which are now known as torture shoes. OMG they were so painful by the end of the night and my feet have still not fully recovered.

I was STARVING by the time I was done picking out the dress. I had about 3 hours to run home, take Melissa to her friend's house and then get ready. I stopped 1/2 way home at Carl's and got a chicken sandwich  because I realized there was no way I was going to be able to wait until dinner to eat.  Eating a couple hours before a big dinner? Sheesh.

Paused for a beautiful sunset picture when I get off the freeway (last one of 2012!) 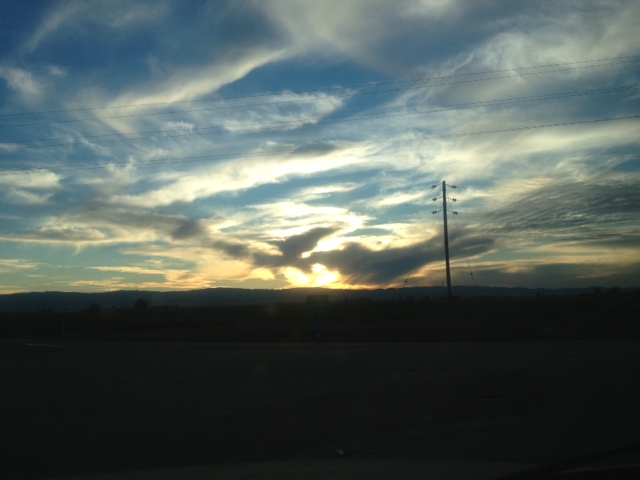 I got home and Melissa STILL wasn't ready to go and we had to wait for her pants to get out of the dryer. Scott was already home so we decided to just get ready and then take her on the way (which was totally in the other direction 40 minutes round trip out of the way).
Somehow we got there before it was time for dinner. 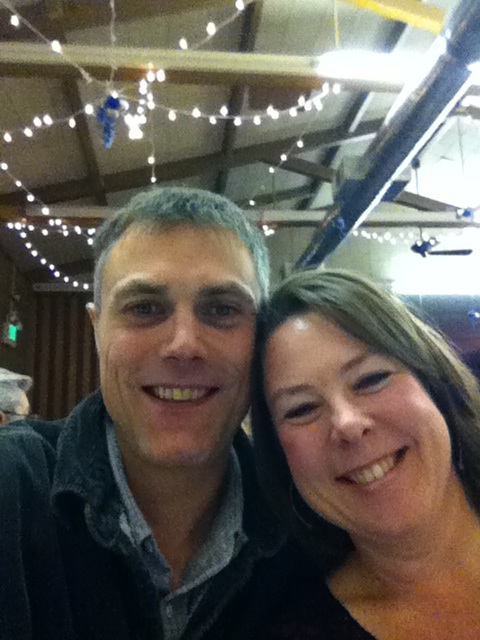 Wish I would have thought to bring props!! 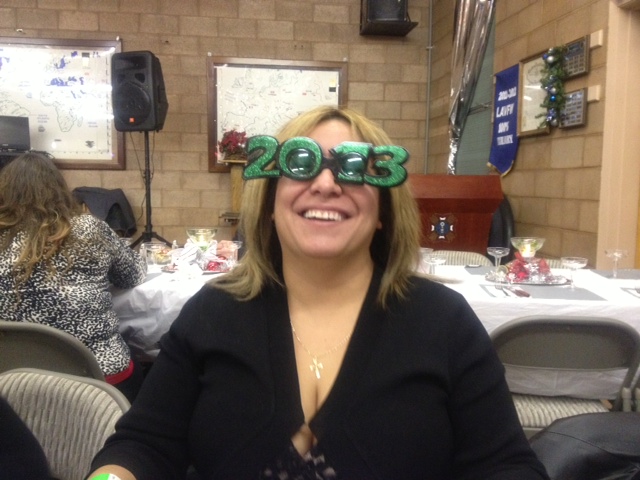 I was still starving for dinner and ate this ALL. But the foil. And then ate half of my friend's roll. And dessert. 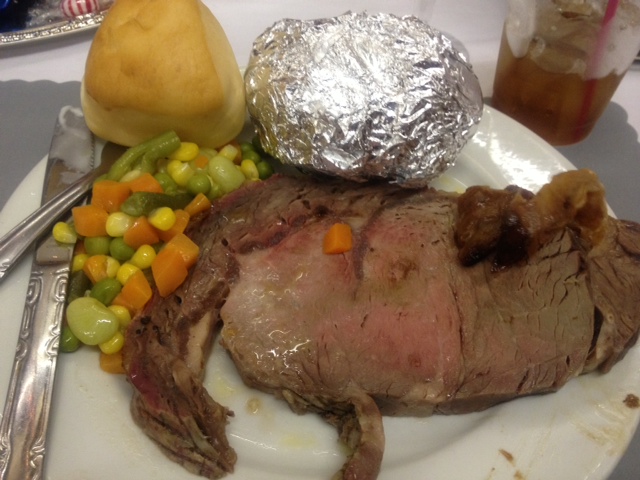 And then got excited when I found pretzels at the bar. What the hell? Don't you hate days like that when you feel like you can eat the whole f'ing house?

The place was FULL of old people (duh Julie everyone tells me, It's the VFW, what did you expect.) I don't know? I hang out with older people all the time but those are my older people and I know how cool they are!

I felt a bit over dressed but my whole group was pretty dressed up so it was ok. I could have worn jeans and a sweater and fit right in. What fun is that though? 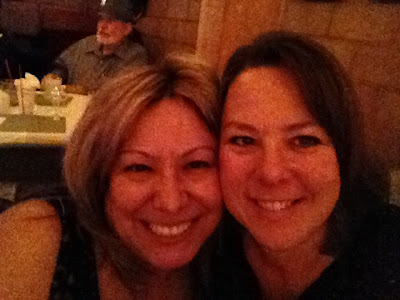 Scott did not drink at all. What a good designated driver. I on the other hand, smile really well when I'm a bit tipsy. Too bad this is so grainy. I'd freaking frame it. 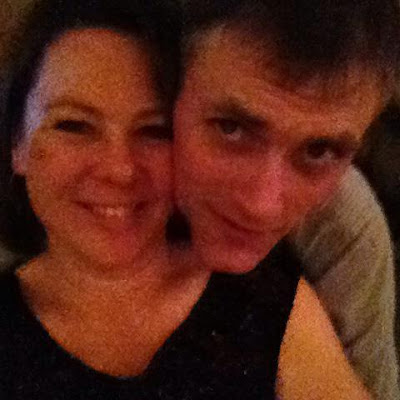 Obviously this is when the night was almost over. 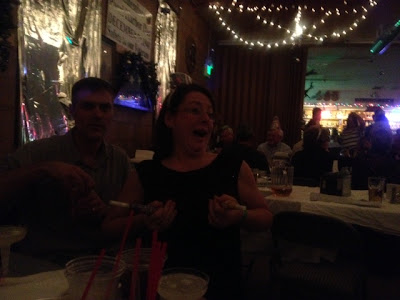 I may have had to open the window and lean my head against the door frame on the way home. I do not do well drinking and then getting in a moving vehicle.

If you find one of these somewhere on the side of the road it's mine. I'm hoping it's wedged IN the car somewhere and didn't fly out! 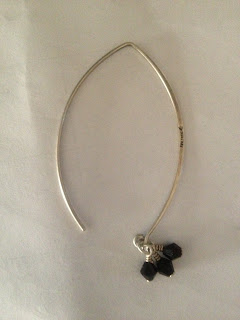 I saw this and thought it was appropriate for me and probably you too! 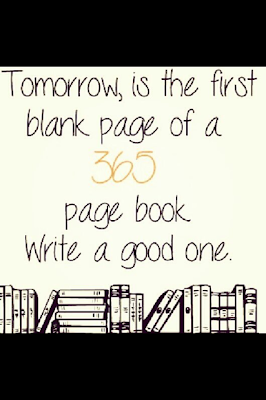 This morning I got up and eventually got myself ready for my run (no hang over whew!)

How do you like my new running tank?  I don't know why it was on clearance at Target so cheap! HA You'll see me coming when it warms up that's for sure. For now it's under my other bright running shirt. 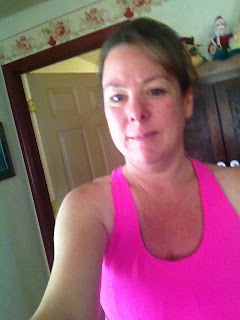 I originally thought I ran 3.5 but figured out that my runkeeper messed up and started me across the street out in some random field so I had to edit it later. My knee started hurting about a mile in so I headed home and did some walking. Stupid knee. 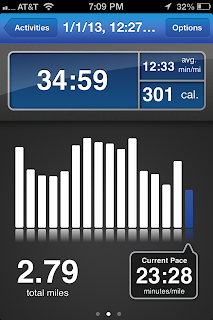 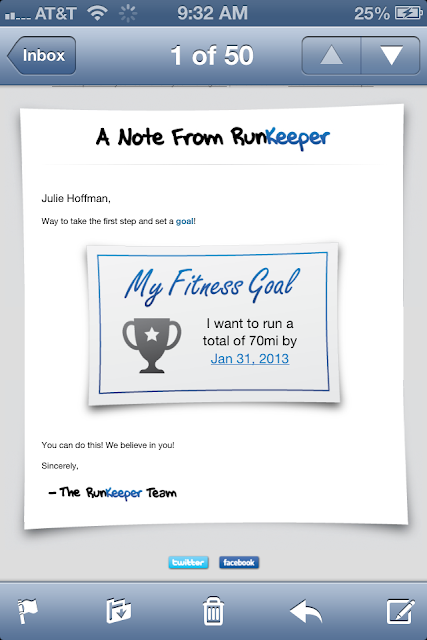 Scott and I went and picked up the kids, took them home and then went to the running shoe store and got him a pair of running shoes. They had a 20% off sale and took that off of an already marked down pair. They were probably excited to get rid of those size 14's! I bet they don't sell those every day!

Scott is going to start doing the couch to 5k program I think! I'm pretty excited about that. Now if I could just get my knee to stop hurting every time I go for a run it will all be good.

Back to work tomorrow. Boooo but it's only a 3 day work week before the weekend. I like short weeks like that!

Happy New Year! Loved the fashion show! Can we just talk about your fricken awesome "gun show" for a second...amazing!Looking forward to reading your blog in 2013!

I too loved the fashion show!!
you looked great in them all.

I loved the hats made like Madonna cone boobies. :-)

I am working so hard on my arms at the gym - can I have yours?