Good morning happy Thursday! We didn't float away or blow away yet so that's a plus. The wind isn't coming from the direction that would blow in my sad sliding door in my room so that is still there. Some day I'll get that replaced.
I actually did work all day yesterday. I finished up my spreadsheet of the applications for all the offices and then did this little audit review thing for them all too. Now today I have nothing lol.
I got the ornaments off the tree yesterday and the tree outside but still have to put them in the boxes. I ended up going over to babysit the kids.
Daniel was sleeping when I got there and was PISSED when he woke up. PISSED PISSED PISSED. Took him forever to come around. 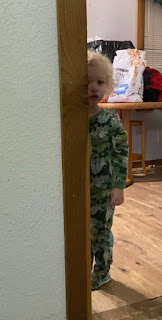 The baby was running a bit of a fever so she wasn't her usually bouncy self either.
Daniel threw chips on the floor so we had to let out the carpet cleaner. Moose is slightly nuts and needs to go for a run with Simon. I tried to get Trevor to bring him a chew bone but he wouldn't do it because it was "storming". 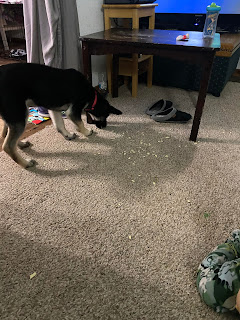 Simon is outside right now enjoying the cool weather in between rain. I haven't been out of the "compound" to see how things look but I saw they closed a freeway ramp due to a mud slide of sorts. It isn't on any real news so it must just be a little bit lol.
Things are ramping up in the forced social world. Tomorrow Trevor has a dr appointment that I'm going to with him in the afternoon. Saturday morning we have a Membership Committee meeting, Tuesday and Thursday going to Monterey if it doesn't wash away before then. I'll be missing darts on Tuesday so had to get a sub. No one is excited about going to this meeting in a small area with a bunch of people. We've all become anti social germaphobes (for good reason).
Since I don't have anything to do for work today I'll work on some more of the heart banner things. I have all but 2 of the first round sold/spoken for. Only one person has paid me so far but she didn't come get it either. Oh that's another thing there is supposed to be Bunco on Monday but we'll see if they need a sub or not.
Pin It
Posted by Julie H at 9:06 AM