Today we went ONE MORE TIME over to Antioch for their softball tournament. The game started at 4. We met up with the coach and the other players at two and then drove over there.

We got there and put on some sunscreen. It was HOT! We sat under some trees and watched another game kind of half heartedly until it was time for our game. Scott stayed under the trees but I had to get up close. Can't cheer on my girls from way over on the sidelines!!

Jess started out playing on 3rd as usual but then the catcher came up to bat and THREW UP. So Jess was moved to catcher and they mixed up the outfield a bit to cover 3rd base for her. She did really well playing catcher today! She got a BEAUTIFUL hit way out in right field but the girl CAUGHT IT! Probably would have been at least a double if she would have dropped it. She also had a nice hit out to left field and a few other base hits. I don't think she struck out at all today. Oh wait she would have but the catcher did the 3rd strike drop so she ran to 1st and made it. That's such a weird little twist in the game that they have.

They ended up winning the game by 3 runs to get 3rd place overall in the tournament. Afterwards they had a little awards ceremony and they got a nice sized plaque for the team and two girls on the team got individual ones. Jess got one, which was pretty cool!

Afterwards we stopped at DENNY'S again for dinner lol. We only had one of the bunch in the car with us though since more parents were able to drive. Had a little dinner then went to pick up Trevor from Scott's mom's (Thank God for Grandparents!!). His sister was there visiting again so we talked to her a bit. She took MIL out to buy some clothes which was SO NICE of her. Although I think MIL could have got her new jeans at least one size smaller, they still looked pretty big on her. She has lost so much weight from when she was sick.

Came home and finished up working on some baby announcement things I was making for someone. Here is the finished products 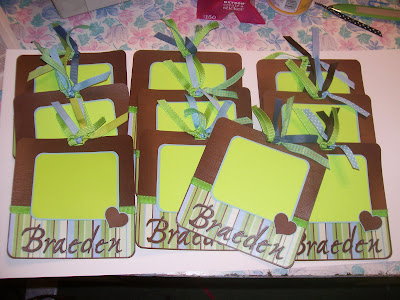 I think they turned out pretty cute. She is going to put a picure of the baby where the big green square is, and write the birth info on the back.

LOL, it is easy to forget the time eh?
Love the baby announcements.

Those baby announcements look awesome. You're so crafty.

If I ever need some personalized anythings... I will definitely go to you.

Oh my gosh those are sooooo cute. That must have taken some time. I guess you did those in between softball games? LOL

very cool....I cannt make anything I just buy them from the store!