Life isn't fair. Sometimes you learn that early on.

I went to work today and didn't take a lunch so that I could leave early to go watch Jessica's first softball game! If you know me, you know I LOVE to watch my girl play! She actually got a ride to the game which was good because they got out at 11:30 today, which is HELLO way too early to get off work. I got to the place they were having their game and I was excited to go inside. The game was at the new ball park that I hadn't been to before. It's awesome! They were on the Yankee field.

So I got there just in time to see her get up to bat. 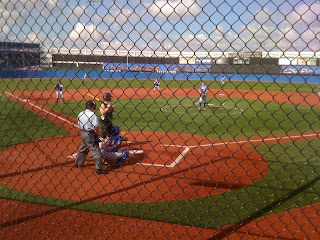 She struck out, but that's ok, almost everyone else did too. Then she was out in right field? She's never played right field before. She's usually right in the game, playing 3rd base or catcher. THEN she warmed the bench for the rest of the game. She was NOT HAPPY.

The game today was part of a tournament  and this was the only game she was able to play in because of the stupid Spanish lip sync contest. Thank God that thing is over on Saturday. Her teacher is a total beotch. She emailed her yesterday to ask if it was ok if she was 1/2 an hour late today to practice so that she could go to the game. She emailed her back and said only if she wasn't later than 1/2 an hour and then proceeded to make a big deal about it in front of the class today. If the witch wasn't such a beotch I'd be in there throwing a fit but I don't want my kid to end up with a bad grade because I made a scene.

Anyhow. So you'd think that the kid's softball coach would have let her play since she knew it was the only game that she was able to play in the tournament. Nice huh? It's like you can't win no matter what. She shed some tears on the way to the car. Poor kid!

Since she got done a little early I took her to get something to eat before the lip sync practice. Then she went back to school for that. She's still there and it's 7:00. (and counting Scott's sitting outside waiting for her to get done) Practice started right after school. I hope the kids that didn't get home were served some kind of dinner??

After I got home I decided to mow. Scott did some the other day but didn't finish and that drives me crazy. So after a couple hours I was done. 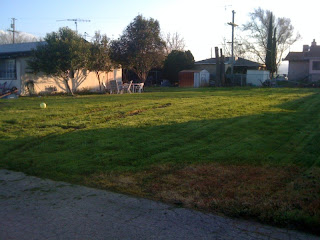 I did this whole lot (the brown part is front the neighbor's love of round up, he did all along his fence :sigh:)
The back which you can't really see and involved moving huge concrete brick things that someone (the man) moved and didn't put back) 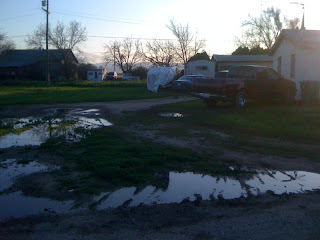 and the side to the left here and the back until I got tired. I was going to go until I ran out of gas but the dog was getting a little brave and going a bit too far over to the neighbors.
I've been sitting here playing farmville since then (dinner was carne asada in the crock pot) . Here's Rusty after being outside with me the whole time I was working out there. 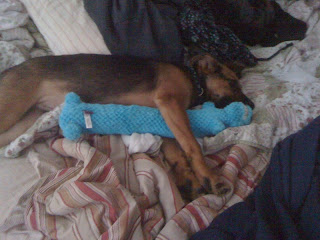 Was this spanish lip sync project actually approved by the school? The principal saw this lesson plan and approved it? How does it add enrichment to the curriculum? Gah!!!