1. It became officially summer on Monday. What's your favorite part of winter?
Not using the A/C for a couple months

2. What was your worst summer vacation ever?
When I was a kid, about 14 I guess, we went to Columbia in our station wagon. 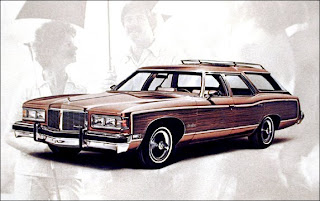 That looked kind of like this one minus the wood on the side. That would be my mom and dad and 2 brothers (probably about the ages of 5 and 7) and me in the back. My dad had put a seat belt in the back so I didn't have to sit with my 2 brothers, who took turns trying to kill eachother and/or me. The ride started out ok if I remember correctly, but somewhere about the time we hit the foothills the car started to overheat (cronic problem with that car). We all had to GET OUT on the side of the road and sit and wait for the car to cool off. Did I mention that it was about 110 outside? Fast forward an hour or so and we finally get to our destination. It was hot. It was dirty. We went on a REALLY BUMPY stage coach ride and I freaking hated the whole thing. I'm sure that had something to do with my age. On the way home the car started acting up AGAIN and we ended up spending the night at this little inn that my parents went to occassionally.  All 5 of us in a room with a double bed.

I still haven't been back to that place.
3. Kimber's husband just got the dream job that he's hoped for. So a big shout out to her and Anthony! Tell us about the best job that you ever had.
My favorite place to work is the fabric store. That is where I got my first job. The hours suck, you always have to work holidays, they don't pay much but it's a fun job. Most people aren't in a fabric store because they hate to sew and have to.  Except on Halloween.

4. Who is probably talking a load of crap about you right now?
Maybe the pastor's wife. I had to go to a meeting at the church that my daughter likes to go to youth group at for a "parent's meeting" for a camp that she's been to about 4 times. I thought it was all a huge waste of time and probably sounded like a heathen while I was sitting there.

5. An alien appears and offers you the opportunity to repeat one year of your life. You will still know everything that you know now. He explains that no matter what you do differently, when you are returned to the present nothing will have changed. What year would you pick and why?
1992. The year I graduated from high school  AND the last year of no REAL responsibility.  I'd be so partying it up!!

6. Name three things you have on you at all times. Explain why.
Phone, self explanitory
Belt, can't ever keep my pants up
Contacts or Glasses, since I'm blind

7. When was the last time you wrote a letter to someone on paper and mailed it?
So long ago I don't remember. I don't even mail bills anymore. I can hardly write either. I'm so used to typing everything now.

8. If you could have everyone in the blogosphere read just one of your posts, which post would you pick and why?
Hmmm not sure, this one is ok :)

9. I recently read that the music industry continues to decline at an alarming rate. In the last year it said the sales of Michael Jackson's and The Beatles' music are the only artists who sales continue to climb. The article stated that the two are holding up the industry. Have you bought a CD or mp3 of either artist recently?
Nope. I have most of the Beatles CD's that my husband bought me over the years on my Iphone. I haven't listened to any MJ stuff on purpose since the early 90's.

10. What radio ad right now do you find so annoying that you'd rather have a tooth drilled than hear it again?
Anything to do with politics.
11. Berleen walks into a bar on a hot Minnesota day. At the bar sits a priest, a rabbi and a minister. A ten foot duck walks into the bar right after Berleen. What drink do you think Berleen orders?
Hopefully some Kessler and Diet Coke so she can share with me.

12. There is a knock on your door. It can be anyone in the world. Who would you want it to be?
My Grandma! (the nice one)

13. What would be the worst entertainment or sporting that you could be forced to watch?
Probably Golf. It's pretty boring on tv.Pin It
Posted by Julie H at 10:18 PM

That sounds like the WORST vacation. I concur on golf! Great job...

And here I am thinking your vacation sounds pretty good because you at least got to get out of the car and you had your brothers (no matter how they acted) to talk to. I was an only child locked in a car with my parents for a week (((((shudder))))).

I am Harriet said...

Remember those days of piling into the car and then piling into A hotel room? Things are so different now.


Have a great Thursday!
http://harrietandfriends.com/2010/06/who-is-probably-talking-a-load-of-crap-about-you-right-now/

You made me think of so many family road trips with the memory of that vacation! Try being the youngest and having both parents and older brother smoking, in 90 degree weather, stuck in heavy traffic and the a/c goes out. You gotta pee so bad your eyes are turning yellow and are choking on smoke, and your parents simultaneously yell SHADDUP! *Shudder* Florida road trip 1976. Never. Again. (I heart my hubby and his air-miles!! hehehe)

This is a hilarious meme! I might have to join in sometime