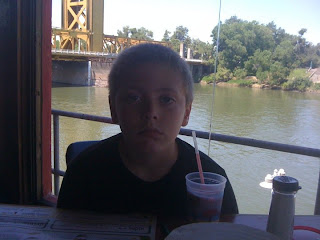 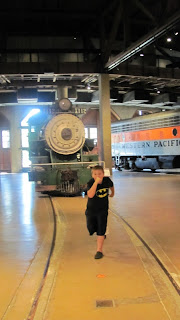 I knew I had to go to Sacramento to get a Government ID card for work so I decided I'd just take him to work with me for the morning than drive my own car to pick up the card and then spend the rest of the day in Sac playing around. A nice mom and son date day.

So I took him to work with me and he helped by running to the printer for me and putting number stickers on some folders and best of all, making a paper clip chain. Eventually it was time to go and we headed off to Sac where I got my ID  pretty easily. I had decided I'd take him to the train museum in Old Sac but first we needed some lunch. We ended up at Joe's Crab Shack since it was so hot out and I knew it would be nice in there.

We opted to sit inside and they put us right up next to the window. 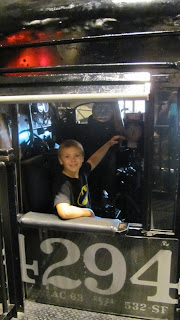 Here's my adorable son, who is spoiled obviously since he's pouting that I won't buy him crab. (cheapest one was almost $30, a little too expensive for lunch)

That's the Tower Bridge behind him. While we were sitting there we got to see the middle of it raise up to let a (really tall) sailboat go through. Not too long after this picture he snapped out of his pouty-ness. Just in time to eat his kid's meal which contained a fish and chips, popcorn shrimp and a fried mozzarella stick. He actually had to get a little box. SUCCESS! The boy is FULL! I had the lunch sized fish and chips and it was quite a bit. I can't imagine a full size. We got out of there for $20 plus tip so not bad!

Since we had watched the bridge he wanted to go walk across the bridge. We did that and he wanted to keep on walking on the other side of the river but I talked him out of that.

After that we walked back through Old Sac to the Railroad Museum. When we got in there there was a man trying to get in with his two little girls. Apparently they didn't like his ticket or the story that went with him because he was talking to the manager by the time we were going in. 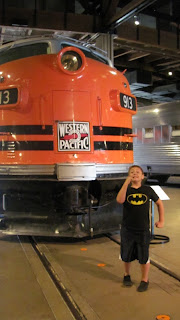 It was $9 for me and $4 for Trevor to get in. Which is a little spendy if your whole family went but not bad for the two of us.

When we first went in he was kind of rushing through everything. After he had seen it all we went back through it a second time and he let me take pictures of him. He was in a pretty good mood at that point and did a bunch of posing.

When we first entered we saw there was a movie playing at 2:00 so when it was time we found our way to the theater doors. It was on a whole floor I never even saw the last time I was there. The movie was really lame and not well made. I had trouble following some of it so I can imagine how it was for an 8 year old brain. He didn't complain too much though. The best part of the whole thing was when it was over the screen lifted up and under it was windows and doors that went out to the museum floor. We both thought that was pretty cool. 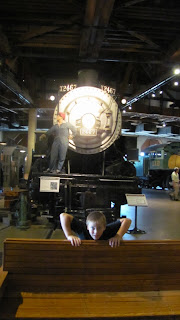 We went into the gift shop before we left. I was looking around and noticed they had a display of books about Orphan Trains. I had never heard about those before and flipped through one. I made a mental note to check the library when we got back and they have all the same books (for free, score!) I need to see if they have the movie too.

Trevor settled on a lighted key chain for $3.99 for his souvenir which was great for my wallet. The lady before us in line spent $80 in there. I can't imagine spending that much money in a touristy gift shop.

After that we headed towards home. He fell asleep almost immediately. I'd say it was a pretty nice date day :) 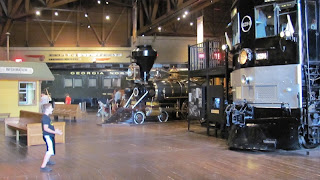 What a great day!

What a choice day with your son.

Nice! I was in Sacramento for a teacher's conference a year ago and had such a great time.