Whoohooo it's Friday!! So what's our plans??

I have no plans this weekend. Except for dropping my kid off at a birthday party tomorrow. And maybe going to a party for a gal I know. Still trying to decide if I'm going to go to that. I might just go for a bit. Hopefully I won't have to take my cat to the vet. I've been nursing a wound for him (stupid cat getting into fights dammit) trying not to have to take him back in since I still owe $300 from the last time. It's went from looking good to not so good today.
Oh and I guess I should work on this. 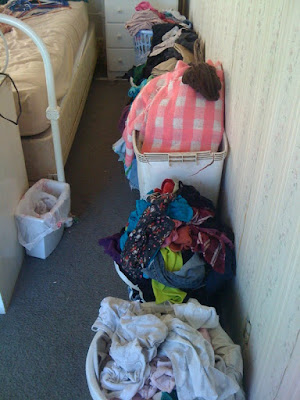 The clean laundry snake. At least it's clean right? I love looking at beautiful pictures, of beautiful rooms, but THIS is my reality.
And why is it that I'm starving the minute I sit down at the computer?
In other news I finished another audio book yesterday. It's kind of nice when I'm doing a really boring project at work that I can do while I also concentrate on an audio book. It's win win!
Testimony by Anita Shreve
from Goodreads

At a New England boarding school, a sex scandal is about to break. Even more shocking than the sexual acts themselves is the fact that they were caught on videotape. A Pandora's box of revelations, the tape triggers a chorus of voices--those of the men, women, teenagers, and parents involved in the scandal--that details the ways in which lives can be derailed or destroyed in one foolish moment.

The story goes from one person to another (in the audio book each person is actually read by a different person which seems to be rare on audio books) telling their story of the events that lead up to, during, and after the "sex scandal".

I personally thought that it was a pretty good book. It kept me wanting to know what was going to happen next. I gave it 3 out of 5 stars.

Now I'm loading another book onto my iPhone so I can listen to it while I put that laundry snake away and make dinner. Which will lead to doing the dishes too. Yeahhh funnnnPin It
Posted by Julie H at 5:39 PM

I'm packing for Vegas. And laundry. The really disgusting thing is I realized the DAY I get back from Vegas? I get to re-do all of this laundry again. Welcome back, right?

I don't have laundry 'snakes' I have laundry volcanoes!
It's like a mountain spewing all over the place. I hate folding and putting laundry away. HATE. IT.