Last night I was SO nervous about the Bean Run.

I got up nice and early this morning, took a shower, cried a bit (seriously I'm a basket case sometimes, WTH?), got dressed, responded to my awesome friend Sarah's texts wishing me luck (which also made me tear up some more, I'm so lame!) Scott got up and I told him he didn't have to go with me but he said he would. Trevor woke up and I asked him if he wanted to go and watch and he said ok. So we loaded up and were on our way.

Scott drives like a Grandpa sometimes I swear. He was going ten miles under the speed limit for almost the whole trip, which I guess is a good thing because it took my mind off of how nervous I was to how we were never going to get there.

Which of course was silly because we were there in no time. I found the line to stand in to check in and before I knew it I had my number. I turned around to get my goody bag and t-shirt and my aunt and cousin were the ones handing them out. Small town anyone? I chatted with them a bit and then got my bib on and waited for my step mom to show up. 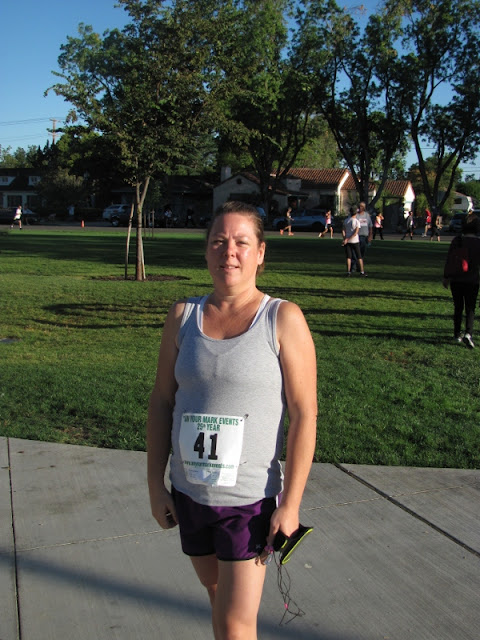 note to self, go buy a nice looking running shirt

Before long she was there and we were chatting about running stuff. My dad went and parked his truck over at the Bean Festival and then came back and talked with us.

Every single blog I've read about running stresses using the bathroom before. So I went over to use the bathroom (the start/end point was at the park) and it was LOCKED! Holy mother! Awhile later I noticed there was ONE unisex bathroom that was open so I ran over there (thank you God!) .  That line got rather long quick!

Before I knew it it was almost 8:00 and people were all moving over the starting point. And then we were off! I started running with my step mom but told her don't hold back for me. She was going just a bit faster than I thought I should so I slowed myself down and ran along.

I ran and ran and ran and kept my eyes out for water. WATER! Where is the water??? Eventually I found it just before the 2 mile marker and slowed down to a walk to grab the water and sip a bit and then started running again. But not long after  that I felt the need to walk a bit. I tried to keep it to ten steps each before running and would alternate running to that car or whatever and then ten steps or so of walking.

Eventually we turned the corner to the last block and there was a woman standing on the corner clapping saying "you're almost done!" I thanked her. Man I wish there would have been more of her all along the route! I ran and walked the last long block and then I knew I just had to go down the street and around the corner and I'd be done!

Somewhere in me I found some more energy and I kicked it up, sprinting along to the corner and then down the street towards the finish line. Scott got this most unflattering picture of me haha. 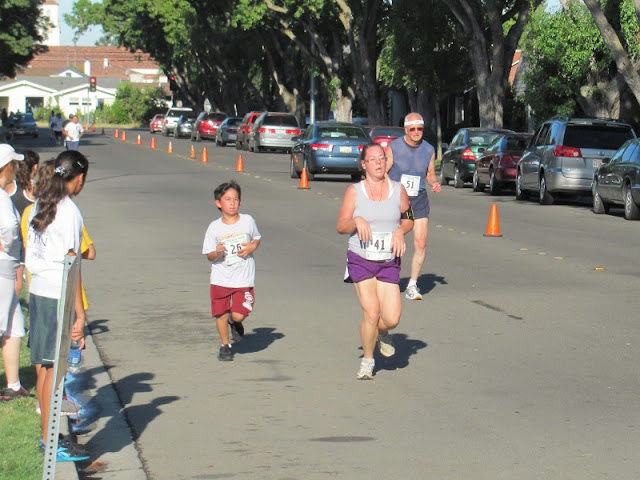 Is it sad that I'm excited I beat that old guy and the little kid? 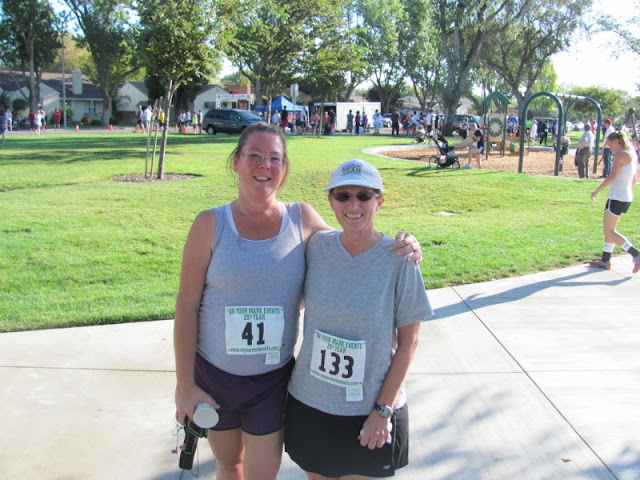 Here's me and my step mom after the race. She's ran full marathons and she didn't start running until she was older than I am now. Inspiration anyone?

Love the picture! That's a great time...you beat mine!!! Congrats-you should be proud...except for that photo-HA! Kidding :-)

Good for you! You should be so proud for this accomplishment! Love that last picture...the true face of running! lol!

wow great job! I'm impressed. I am doing the couch to 5K but really don't have any intentions of really running one! How hot was it?

Well done! I would have had trouble even just WALKING the distance. YOU ROCK.

Wow - you're like an athlete or something now Julie! (o; Way to go on finishing AND on not being last. What an accomplishment!