Nothing too terribly exciting happened today but LOOK at what Scott found outside under my car when he got home from work today. 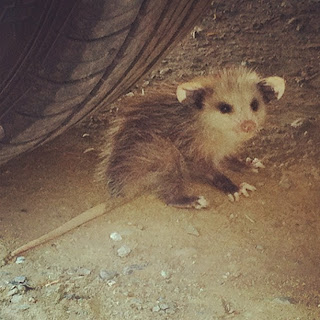 Is that not the cutest baby opossum ever? We thought it must be a little sick to be out during the day and all by itself so we relocated it to some tall grass by the neighbor's house (no one lives there). I've seen opossums over there quite a few times so maybe it's mom will find it. If they weren't so scary and possibly carrying rabies I'd so snuggle with it.

Every time I see something cute and furry like that I think of my Grandma Marilyn. She just loved the baby critters! One of my favorite memories of her is when we went to go see my Uncle Don (her brother) in Nevada. We stopped in Reno at this mall on the way home and they had a pet store. A pet store FULL of ferrets. Ferrets are illegal in California but oh did she think about smuggling one home. I can totally remember her face and how much joy she got out of playing with them.

When she was dying from cancer my aunt's sister in law brought over a baby goat. Like a super baby one. Even though she was so sick she still smiled and laughed with that baby goat.

Grandma always had a minimum of 3 dogs. MINIMUM. It was quite chaotic over there when ever anyone rang the door bell. There was always one dog that wanted to kill another dog so they had to be in separate rooms and then one would get out and they'd start fighting and next thing you know Grandma was bleeding. Ah fun times ;)

My mom's talked about having cats as a kid but I don't really remember any cats over there.
I do remember the raccoon.  (that's me) 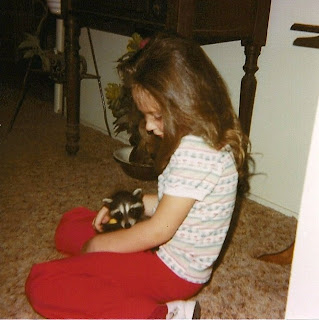 She also had a skunk when my mom was a baby.

Danny (or Dandy I can't remember which one was right)-that's the chihuahua that used to scare the crap out of me that he was going to bite me and then he'd lay on my back while I watched TV on the floor.

Jenny & Molly were the miniature schnauzers she had.

Rascal & Tiffy the wired hair terriers. They had a litter and my aunt kept Muffin (but she ended up back at Grandma's). Little Bits was the runt and I remember he'd hump my grandpa's leg and he'd LET HIM and just walk around with the dog wrapped around his leg. SO GROSS. Muffin and Little Bits had eye issues and they were all icky dogs. They had something genetically wrong with them I think. Their hair was just ick.

Trouble was a Queensland Heller someone found somewhere as a pup and she ended up with him.

Mr. Wiggins the West Highland Terrier  (mom ended up with him when Grandma passed).

Funny how one little furry thing makes you think of someone and little things about them.

Hopefully that little thing makes it!

Would you belived possums are a PEST here and we kill them when we can?

They spread disease and ruin our forests.

We play "Spot the possum" when we see one squished on the road!

I used to go shooting with me Dad and shoot them too.

I like your memories of all the dogs and animals your Grandmother had.

Oh and I doubt that baby possum will survive if it's Mum isn't caring for it.