So much to blog about! I'm so behind!! The good news for my little blog here is that I'm probably getting a vacation!! An UNPAID vacation because the government men and women are fighting. But a vacation none the less. I guess I'll know when I wake up in the morning if I'm going to work or not. So far all signs are pointing towards taking the kids to the bus stop in my night gown with bed head.

Scott was sicker than a dog all weekend. Friday night I went and ran some errands with Melissa, which included picking up a new to me JUICER. Yes, I'm going over to the green side. I just need to figure out what I'm going to juice so I can buy the stuff when I go to the store. Excited to try some things.

Saturday morning I got up and ran my 9 mile long run by my lonesome since he was still sick. I ran a bit in the "compound" and then down the road a bit, which was scary by myself and then back to the compound to finish it up.

A little funny, saw one of my book club ladies that walks and she asks "how far have you gone so far?" I said ONE! EIGHT TO GO!! and she laughed and I cried. Just kidding about the crying but that sure sounds like a lot when you shout it out to someone.

After my run I got all ready for my trip to Reno. I was going to my friend's bachelorette party! Everyone else in the party went up Friday but for a few reasons I decided to wait until Saturday to go. (Partly to get that run in, yes, I'm crazy.)

Melissa got invited to go to an amphibian festival or something like that with my sister in law and to spend the night and my mom said Trevor could spend the night with her. So I loaded up the kids and we were off!

I dropped the kids off and then made my way to Reno which is like a 3 1/2 hour drive. When I got there I sent Scott a text and this is how it went. 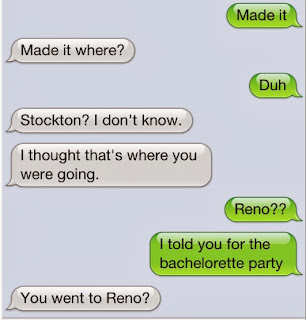 At which point I called him to make sure he didn't fall on his head or something. He sounded ok but said you know, he's been sick for 4 days. I told him maybe he should eat something..

I'll post more about the bachelorette party later.  Since this is getting long. BUT yeah it's confirmed. Vacation! With no pay boooo.Pin It
Posted by Julie H at 9:14 PM