I only have pictures of my dinner from yesterday. The last week of Hello Fresh since I cancelled it. Two more meals to go after this one.

I was disappointed when I opened this one up and saw the big ass peppers. I don't know if I picked this or not but I was like ugh this is going to be horrible. But it was actually really good! I'm super sensitive to holding peppers though. I used to have some disposable gloves to use to hold them and cut them but I wasn't prepared. I washed my hands 500 times and still ended up touching my lip somehow lol. It wasn't super spicy when it was done so that was good. 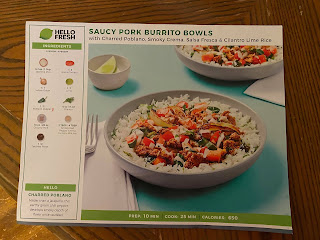 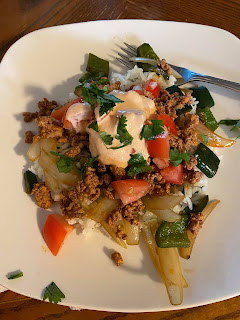 After work yesterday I just did some cleaning. Somehow never ended up finishing my masks. I'll try and get those done today. After dinner I ended up driving to pick up Jessica. She was with her boyfriend and his brother on the way to Modesto and they got a flat tire. I brought them a jack but his car was lowered too much for them to be able to do it. They waited for the tow truck and I brought her home.
I watched a bunch of episodes of Chopped yesterday. I'm always amazed when there are kids on there. Most people I know don't even let their 10 year olds use scissors unsupervised let alone a gas stove and sharp knives.  My nephew Tony said he doesn't even know how to cook eggs. He's moving into his college apartment this week I think.
Trevor seemed to have a good day at work yesterday. He was gone all day. He said they just showed them around the place and watched videos. Sounds like they hired a bunch of people at the same time for different jobs but start them all off the same way. He just left to go in for today. He said he is working on the weekend so that will be weird. Such an adjustment going from a mom of three all home to hardly anyone here. Not that I'm complaining about the quiet haha.
I've got the sprinkler going in the front yard, need to get the laundry going again. I've been trying to organize and clean up stuff a bit at a time. Yesterday I finally went through a tub of books someone gave me for the baby and a box of fabric. Not keeping most of the fabric since it is fleece and I don't sew with that. At least half of the books I don't want either so I'm working on another free table. Once I get a couple more boxes worth of stuff I'll set it up again.
Off to finish my work emails for the morning. Some day soon we have a deadline then it will be crazy again.
Pin It
Posted by Julie H at 9:23 AM