Good morning, I'm half dead this morning. Our power went out right after I got home last night. It's just a little warm here and smoky so that's awesome. I sat outside for awhile and then came in and went to bed. Scott of course comes to bed but opens the windows, because you know, it's hot.  Apparently the recliner doesn't work to sleep in when the power is out.  He's grumbling and whining and then snoring so I'm like well I guess he's good now lol.  He woke up later and was talking to himself walking around and taking his temperature? because he's hot. Yeah it was like 100 degrees today, you're going to be hot with no fans or ac.
Anyhow, we survived the great power outage of the day haha. It came on at like 1am .

Yesterday I cut up all the fabric I had bought plus a few others that people have asked for for masks. The top section is orders and the bottom is ones I am just going to make up. I needed to get more of two fabrics so Trevor and I went to Joann's and got that. 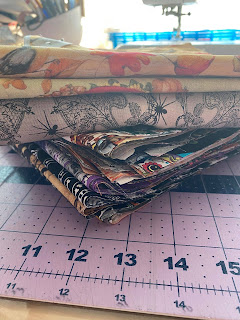 Then we went shopping for some pants for him. It's ridiculous how hard it is to find pants for big guys. I'm just like where do the Tongan guys get their clothes? We finding three pairs of pants for him at Kohls so he was happy. I got two pairs for Scott to try, hopefully he likes them since he really needs some pants. I was kind of looking for some cargo type shorts for him but they all looked like they'd be bikini bottoms on him. Even in their "big and tall" section. What part of big and TALL does not mean LONGER haha.  I should just get brave and learn try sewing some but ick don't really want to.
After we got done shopping we went over to Chili's which was slammed with people waiting for a table. I asked if we could sit in the bar area and they said yes so we went in and I cleaned up an area with some napkins someone left behind. There looked to be one waitress in the regular area. These poor businesses that can't get anyone to work. Although if they paid people more they'd be able to seat more people and they'd get more business so it's a bit of a catch 22 I guess.
Right now I'm trying to get the Got Junk people paid so that they can come out and pick up the printer/copier/scanner. They sent over a form that they wanted the credit card info, I sent it on to the gal with the purchase card and she says I can't do that. Now if that was me I would have just called the place and told them that I had to give it over the phone instead of kicking it back to the office. I email back the form that is partially filled in and her phone number to call for payment.
So today I'm like are these people coming or not? I call and they say oh yeah still on the schedule, we'll take care of payment. Ten seconds later I get an email with a blank form. What the actual hockey sticks. So now I'm playing email back and forth (with the purchase card person copied & her phone number on the email).  So stupid.
I hate being the freaking middle man for this kind of crap.
I need more coffee.
So might be going into the office today if I can't get someone else to take care of it and they get their shit together.
Pin It
Posted by Julie H at 9:24 AM

I'm having the kind of day you just spoke of. Trying to contact utility companies for shut-off date. OMG, you answer every prompt then you're on hold and then poof - disconnected. I screamed and walked outside. This happened with 3 companies in a row.
I know a couple of waitress and wait staff who refused to go to work due to covid and their fear, not the lack of money. I also know of a few other people in various positions who refuse to work so quit their jobs due to no mask mandates and they refuse to die or get sick. One woman says while she is vaccinated if she brings this home to her husband who is also vaccinated it could be far worse for him and his health condition. His doctor told her to be diligent to not bring something home to get him sick. So what is her choice? Go to work and bring something home to cause her husband to die or quit her job? Horrible choices to make. She wants to work. So she is looking for work from home situations and making far less money.

@Peg, yes people forget about the pandemic too. Here it's like that cousin who keeps showing up but you kind of forget about them for a minute. Even though I'm still working from home.