This morning was the worst fucking morning ever. But I'm still married and my husband is still living in the house and I didn't key his car or throw all his clothes out in the yard (contemplated both) so, hey, it's all better now. Right??

But on the upside I bleached my entire kitchen and got the living room cleaned up. It'a amazing what I can get done with I'm stressed out.

Went to Jessica's practice game this afternoon. Got there right when she got up to bat. She struck out but at least we were there to see it lol. She played 3rd base and catcher, one inning each. They had to switch off with the sophomore team because of lack of fields or something. It was just a practice game though so whatever!

Here she is up at bat. 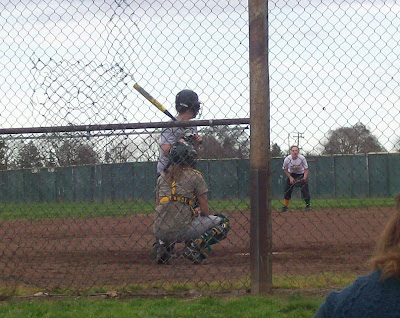 Going to have to dig out the chairs and put them in the car for the next time we travel somewhere. I wasn't expecting there not to be any bleachers so we sat on the damp grass. The boys played with a football and Trevor's puppy dog that he carries around. They were covered in little bites at one point. Not sure what the heck was flying around out there but apparently they were tasty little boys!

Oh look what I found on my camera card!! My "Scene" Jock girl lol. She cracks me up the pictures she takes of herself. 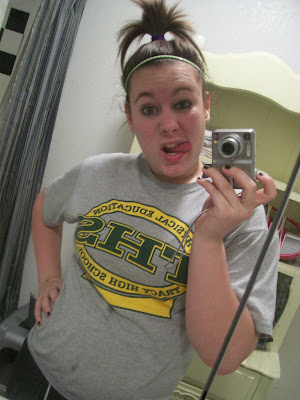 Just watched The Biggest Loser. WHY OH WHY do they have the freaking drama thing with changing the teams.

"oh woe is me, I have a different trainer, the world is ending"

Get a freaking life people!! You are there to lose weight, the other trainer knows what they are doing also and you will probably benefit from having a different work out plan. Suck it up already. I swear half the show was about their changing teams drama. Makes me wish I had Tivo so I could just skip past it all.

I keep telling Scott that Bob has to be gay. He keeps saying no but after that he was agreeing. Going to have to look up if he's gay or not lol.

Jessica just gave me a shirt to wash. Needs it tomorrow morning.
Yeah it's 9:30

Did I mention I got Trevor's cold?

That reminds me, I took him to the doctor yesterday. She says he has asthma, no more bronchitis. Gives us a prescription for cough syrup and another inhaler.

Go to Target (see I changed pharmacies finally, no more bitching about Wal Mart!), drop it off, go shopping and buy my million things that you can't get at Costco (GRAPE jelly anyone??).

Get back to the pharmacy and she tells me the cough syrup the doctor prescribed is for children over 16. She put in a call but they hadn't called her back. So ok she starts to ring up the inhaler.

Are you fucking kidding me?? That is with insurance.

UM NO. Not paying that. We have enough random inhalers hanging around the house from Jessica & Me the kid isn't going to die.

So she said she'd call about that too but I never got a call back about anything today.

Maybe Target doesn't have very good service in their pharmacy.
I bet Wal Mart would have called me back.
But they have lines.
BIG ONES.
And one hour waits for meds.

So I guess I should call tomorrow. But really he seems better today and not much coughing.

But my throat hurts so I think he just gave it to me.

I will NEVER go back to WalMart. I have had 4 bad problems there. And none at Target. I have been shopping at Target for about 10 years and never had a problem. I started shopping at WalMart about 5 years ago and its was nothing but nightmares. I go there now only to look at the freaks that shop there, its like going to the zoo lol.
I think its time to get hubby his own blog, I am curious as to his near death exsperience!

How about Costco pharmacy??? Target always annoyed the heck out of me. I told you they are ripping you off on inhalers..ugg. Hope today is better!! :O)

I'm glad that I don't have to worry about this stuff right now. Sounds frustrating--

My sister was a softball coach, so I remember the days of going to all of the games. Your daughter is going to do great!

I hope your son feels better.

WHAT did your husband do? Never mind anything else! I am NOSEY~!!!! I know.

I use Walgreens Pharmacy. I'm so excited because a new Walgreens is being built right around the corner from my house.