Yesterday I spent the whole day in the yard and I have a hell of a sunburn to prove it. It's all on my lower right leg and makes people gasp when I show it to them. Yeah. Sunscreen might be a good thing to add to my little garden cart.

I filled this wheelbarrow. Then later I realized the tire was flat and I can't move it now. Whoops! 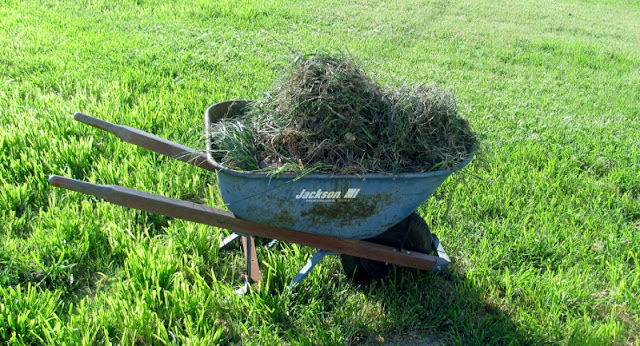 Most of the weeds came out of the flower bed here. I turned it all over and put the rest of the border bricks in. It was only about half way down the long row there. I know it's crooked but I was too tired to fix it and I'm just putting veggies in there. 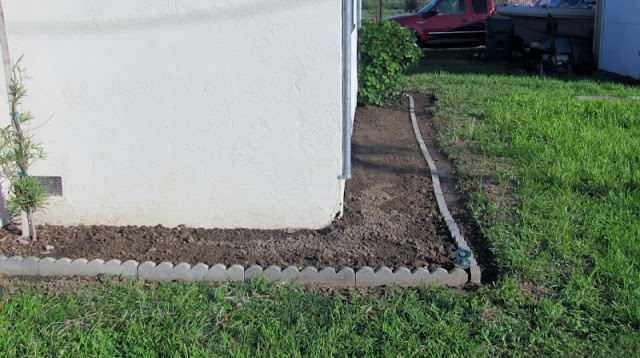 And then, I still had some energy so I decided to work on this area. We've never really done anything back here because eventually we're taking that sliding glass door out, making that all wall and putting a nice regular size door where the window is. Some day. 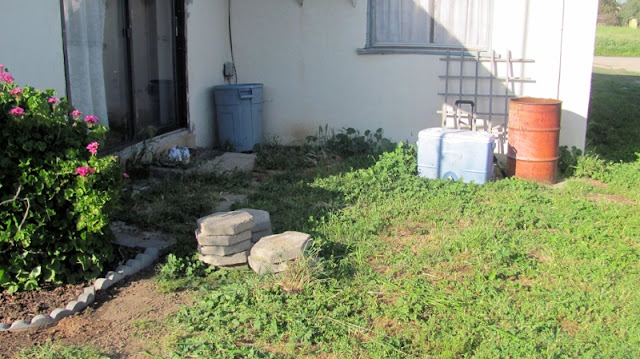 But I'm tired of looking at it like that so I cleaned it up. I turned over the dirt against the wall and put the big step stone bricks as a border. Origanlly when I bought those briciks in the 90's I was going to buy a few a week but never got around to buying more than I did on the first trip. They were going to be my walk way to the garage. Then they discontinued them and I've never seen them again. Figured I might as well use them for something. 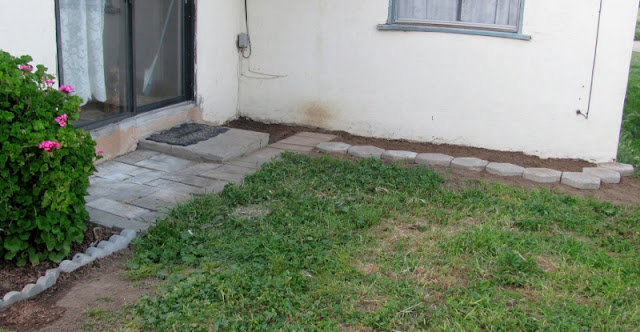 I still need to clean up on the left there a bit. Most of the green is nasty weeds like goat heads, these other things that get like 8 feet tall and have roots to china and cockle burrs. Nasty stuff! I'm thinking of getting a flat of that ground cover I have in the front and putting some in for now. We always talk about putting a deck here but I don't really see it happening anytime soon.

I went to home depot to look for some flowers to put in there but the only ones I could find had such long roots growing out the bottom they'd probably die once I planted them. I'm seriously disappointed in that store this year, all their plants look like crap for the most part!Pin It
Posted by Julie H at 8:23 PM

Yardwork like you did yesterday is back breaking work. You did so much, especially in that area that you haven't touched in a while. It looks so much better now.

I would recommend going to a smaller nursery or OSH for plants. Home Depot's are never very good.