I'm a Father's Day failure this year. I bought ZERO cards. I had even looked at some in the store but told myself I would make them. Um yeah obviously that didn't happen. Hope my Dad's were ok with phone calls.

I was taking care of Scott so hopefully that was enough for him. We went and saw his Dad (and mom and sisters) for a family BBQ.

My friend was having a huge party at her house so the girls had went there first and then met up with us at Scott's parents house. His Sister and Mom made us a nice spread (although nothing green ack!). Usually I come prepared with a healthy salad and/or meat choice but I was just so exhausted. Dinner was ribs, mac salad, potato salad and chips (and bread that I didn't touch).

I'll have one tiny spoon of each please.

We sat and visited for awhile and then I begged off with the kids to go over to my friend's house. They had about thirty people there. Her niece had got married so family came from all over. They had a wedding, graduation party, bunch of birthdays and a reunion all rolled into one.

I felt useful since I helped cut cake :)

The kids had fun swimming with all the kids that were there. I got some nice visiting time in with my friends which I really needed. AND I ate cake and ice cream. Damn it was good too.

Eventually Scott sent me a message that he was ready to go so I went and picked him up. His parents had a whole carrot cake that hadn't even been cut into. I felt bad but I wasn't going to eat it. Guess they put it in the fridge for another day.

Since I don't have any pictures of any actual Father's Day events I'll show you my gladiolas that are up and blooming. I planted the orange/red ones last year. The white ones, when I bought them were supposed to be white and PINK. I've seen approximately one tiny bit of pink on one flower each year. LIARS. 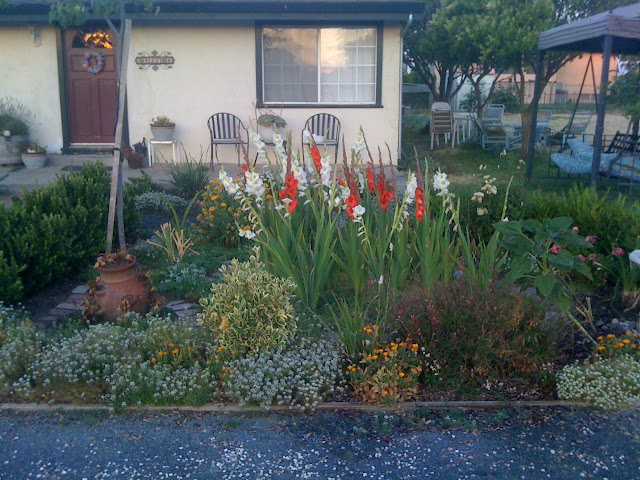 I've obviously killed off the strawberry plants that I had put in that planter. I'm going to have to pull them out and try something else in there.

Last year I got tired of planting bulbs. That would be why there are no orange/red ones on this side. I DID plant a ton of bulbs before the gradation party so next year it should be pretty. I've been trying to add some new ones every year. 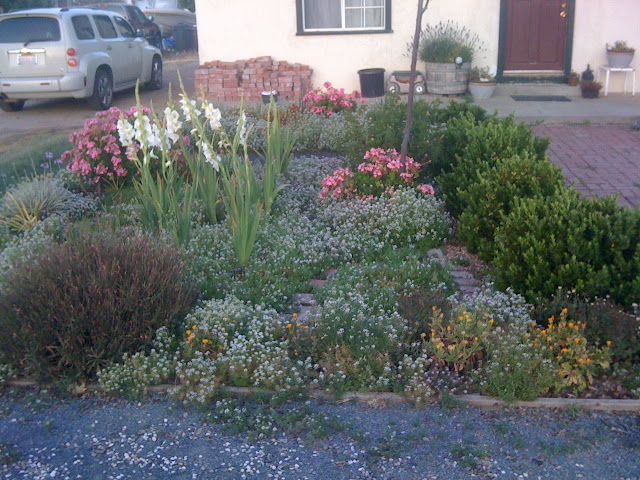 Gladiolas were my Grandma Marilyn's favorite flowers and that was why I first started planting them.  I like them in the middle, kind of a surprise show.

I hope you all had a nice Father's Day!

(starting to think I should just  hire someone to finish putting those bricks down...)

Your gardens look great!! I love the gladiolas!

I have strawberries in a container too and they didn't do well last year when I just let mother nature and my sprinkler system take care of them, but this year they are doing great and I think it's because I have been dumping water in the container every couple days. Strawberries love lots of water I think!

Wow your garden is really gorgeous!