Well this last weekend was nice and mellow. No more ceilings falling in or appliances breaking.  I got the phone call that my new oven was on its way to being delivered at 6:30 am Saturday morning so no sleeping in for us.

When the old oven was pulled out it was so disgusting behind it and under it. I scrubbed the wall out the best I could but it needs some more soaking to get everything off (there is about a 2" gap from the stove to the side wall).

The new oven was put in (ended up using the same cord from the old one since I realized they were all the same and $20) and then Scott fired it up to make some breakfast. He put in some biscuits and then made some eggs and the timer kept beeping every minute. Then he was like the oven isn't even hot and the biscuits aren't even done. I had to get out the instruction manual and found that he had put it on timed bake and it was beeping because it was finished. So then he pulled out the biscuits and they were actually OVER done lol.

I was able to get it to work just fine for dinner and made some apple crisp for dessert. My friend brought me a ton of apples so I ended up making it a second time to use them all up. We didn't have any vanilla ice cream but it was still good. I made a little one up and sent it over to Scott's mom's too. 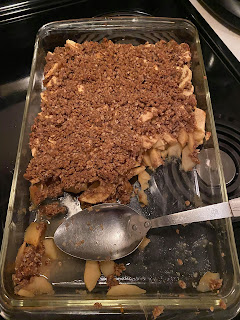 Saturday I worked on masks all day and finished making up all the kids Disney ones I had cut out. Then my friend bought 11 of them. I need to get those mailed out for her today. She was trying to do "practice mask wearing" with her 5 year old and she was NOT having it. She might be homeschooling her for Kindergarten this year but she isn't totally sure yet.

Trevor's school district is now talking about only having the kids go in 2 days a week and do the rest from home. I like that idea a lot better than going back as usual all week. With the 2 days they will split the school up by last name and so H would go like Monday and Thursday and K would go Tuesday and Friday. The rest of the time would be school from home. We'll see how it works out. They are supposed to go back August 11th.

Sunday I sewed something new! I can't show you yet since it's a present and someone sometimes looks at my blog. It was a lot of fun, not quite finished but the main part is.

Then I played with some scraps. I've been throwing them in a basket as I cut stuff out for masks and it was over flowing. I used to give all my little scraps to someone but she doesn't want anymore so after playing around with them I started making some crumb/crazy quilt type pieces. Fun to make something from stuff you'd just throw away usually. 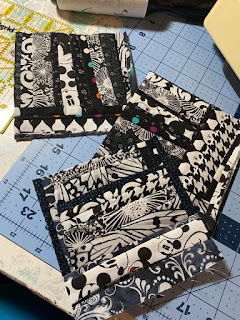 I guess they aren't too crazy since they look pretty linear. Might have to cut them apart and reassemble in different directions ;)

This morning I dusted off my scale and weighed myself to log back into Lose it. I wasn't as fat as I thought I was so that was nice haha. Now to work on losing some weight so I'm not so uncomfortable all the time and look a bit better in pictures..Pin It
Posted by Julie H at 8:14 AM