Oh my gosh I'm so exhausted this morning. Is it Friday yet? Just a little farther..

I went to work yesterday and of course when I got there the two websites I do all my work on were down. They didn't come back up until about an hour before I went home. Luckily I could do most of what I came in to work for still. I had to print off letters after my boss signed them and get them mailed. Then while I was there I went through the actual folders to make sure all the stuff I've been saving on my computer was actually in the files. Such a weird way of doing things and I can see at some point everything is just paperless. That won't happen until they make all the signatures electronic though. There are a some farmers and ranchers that don't even have email so that won't be over night.

I only talked to one other girl in the office yesterday and that was like 3 sentences. So weird.

After work I stopped at the little kids farm stand again. They have a shepherd teenage puppy dog that sounds ferocious while you're shopping. Good thing I'm not afraid of dogs. I got a huge zucchini and a slightly smaller one and some more tomatoes. I still had a cucumber from last time I went so I made up a little cucumber tomato salad with a little bit of red onion and some balsamic vinegar. So good! I ate a lot more of that than what I put on my plate here haha. I made a little casserole type thing in the skillet for dinner with the smaller zucchini, some rice, ground turkey and a can of diced tomatoes (and some spices I threw in). Turned out pretty good. I'm trying to use up some of the random stuff I have. I don't have a pantry and not a lot of cabinets so stuff that's not being used takes up valuable space. 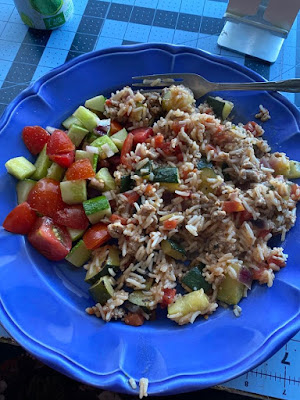 My friend Cassi came by after work to bring some clothes for Jess and I to go through so we took them over to Jess and let her go through them. It was nice to talk to a friend in person! We ended up going for a ride to Dairy Queen. I haven't had a blizzard in forever. They had a Drumstick one and OMG it was delicious. Just a bit over my calories yesterday! Darn Aunt Flo making me eat bad things.

Labels: what's for dinner, working during a pandemic

Oh hell I don't have an Aunt Flo anymore and I'd still eat a blizzard.
When I was single I lived not far from a Dairy Queen. It was 20 blocks. Not far.
I would walk there and get an oreo blizzard (before I was diagnosed as celiac of course) and eat it on the way home. One day a friend saw me and pulled over and asked if I wanted a ride. Was my car in the shop? No, I walk here and home because it makes me feel better about eating a huge oreo blizzard! I told him I was still going to walk home so he left. He just shook his head. It was worth every block to slowly eat that big blizzard. :-) Mmm....

Hi Julie! I've been reading your blog for a while. I live in Modesto and was wondering where this fruit stand is. Thanks! Rosie

@Rosie, its just a little table across from the Ag Center on Crows Landing near Service. They have a little sign that says Little Farmers Fruit stand, which I think is so cute lol. I get pumpkins from them every year too.

Thanks, Julie! I'll check it out.
Rosie