Good morning! Happy Saturday! For some reason I'm wide awake this morning. I have been awake since 4 am. Well not just "some reason", a combo of I keep going to bed early (because I can't sleep the night before), cramps, indigestion (remind me to tell Trevor no next time he wants Panda Express for dinner), the dog being a weirdo and Scott snoring. OH lay!

So after work yesterday I went over to my mother in laws. I had to knock  on the door since they had to change one of the locks and I don't have a key for that yet. His sister was not impressed to see me lol. She warmed up after I had been there a bit though. So what was his mom calling him over and over about? 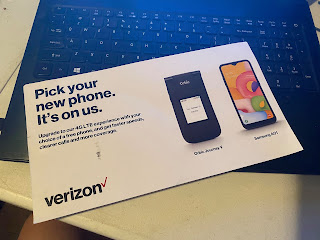 Yes, a flyer in the mail for a new phone. Old people are fun lol. She had a cell phone but rarely gets out of bed. Makes sense. She also has a house phone. A big clunky cordless phone that sits on its answering machine base that apparently she can't just sit next to her and answer because it won't work right but when Scott tried to get her a new phone that didn't work either.  I'm going with user error but hey what do I know.
When I got there his mom was watching TV all wrapped up like a caterpillar in a cocoon. She had several throw blankets around here and when she sat up she had this huge puffer jacket on. She is just skin and bones and was always cold even when she had 30 more pounds on her so it is no surprise she's cold. She just lays on top of the bed though, not like in a made bed with blankets that will keep her so much warmer. I wonder if the bed was made up if she'd hate it.
Anyhow, while I was there I showed her pictures of the baby and then I probably made her mad because I was telling her she should just get her heat and air units replaced if she thinks they aren't any good (Scott swears they are fine) she is like "I can't afford that". I told her yes you can I've seen your bank accounts lol. She didn't like that at all.
I just wonder why do old people feel the need to live in squalor so that they can leave money to people who don't even deserve it and are just going to blow it all. So sad.  She has a bunch of money saved for her funeral. Like how about you live comfortably and not worry about that.
Sorry kids I'm not going to go without so you can go on vacation when I die.