WHY does it seem to take me so long to get on here nowadays? I know I'm probably starting to sound like a broken record saying that.

1.) No desk that's my own at work. Previously I had a desk to myself all the way in the back of the room where no one would walk behind me and I could sneak in a little blog post here and there.

2.) My kids are still out of school and we only have one computer at home so you have to put in a request 24 hours in advance to get your turn. Usually I use mine to do something exciting like pay bills.


So in other news. Scott woke up this morning with a swollen uvala. Yeah. he woke me up by shining a flash light in his mouth and saying "omgawd shekowt mi froat!!" I promptly told him to go take some benadryl and complained that WHY can't we ever have a freaking normal weekend?? 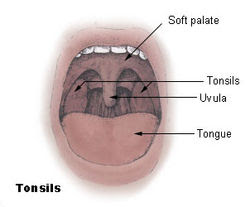 By the way when I was looking for a picture of a UVULA (and making sure I was spelling the right word and not using a word that describes something in the vagina), I came across this, which probably explains wtf was wrong with him. Although I don't think he was drinking he does snore really well and does smoke.
I just sent him that link and he's all excited he has an excuse to go eat some ice cream now.
And since you know I only have one computer you are probably wondering how I sent him a link? I'm at my brother's house because I so wasn't spending the day listening to him lay around complaining. I brought the kids over here to swim even though my brother isn't home. We stopped off at In & Out Burger on the way and SOMEONE I had 2 cups of pink lemonade and now knows that was really not a good idea.
So the kids were swimming and I was bored so here I am. My brother's room mate is here with his little boy and so him and Trevor are taking turns killing off eachother on the Wii game they are playing and then getting thoroughly pissed off at eachother. I've threatened to leave if he can't stop fighting.
Later tonight I'm supposed to go hang out with my friend and get drunk and go dancing. Wish me luck.
Pin It
Posted by Julie H at 4:08 PM

Wow - that site is hilarious!! Someone created an entire site on that very specific issue--and then asks for donations at the bottom! Ha, love it. (not enough to donate)