Greasy Hair Goes To The Mall

Well we made it through the last day of football practice. I did however get pissed off and go over and complain to a coach during the practice though. Trevor sat out for most of the scrimmage part of practice. When they put him in, one of the first plays the defensive player he was up against grabbed him by the pads and head butted him (with helmet!) in the chest about 5 times. WTH?? Marched myself right over there and told him "I don't know if you are paying attention or not, but that kid is playing dirty and I'm tired of watching it!". They made the kid run laps. Guess that was nicer than what I wanted to do to him...

So just one more game tomorrow. Can we get a collective WOOOHOOO

I stayed home from work today because my lungs would very much like to explode out of my chest. I rolled over and called the doctor to get in and when they asked what time I said as soon as possible. She said how about at 9:00, which just happened to be half an hour. I said ok then cursed myself. Obviously no time for shower, bobby pin the bangs up and pony tail, grab some clothes and out the door!!

When the doctor came in to see me she was suited up like I had the plague. Seriously? She handed me 2 paper towels and asked me to cough into those if I needed to cough. I kind of felt like I was on the bottom level of the titanic by the time we were done. She could hardly bring herself to stand by me and listen to my chest. She said I'm probably just viral but gave me a script anyways since I told her it ALWAYS turns into bronchitis when it's like this.

Then of course I had to go pick up my script. Which is at Target. In the MALL. Did I mention that I didn't get a chance to shower? Luckily I didn't see anyone I knew! After I got home I worked on some bookmarks. I haven't made bookmarks in quite a long time! 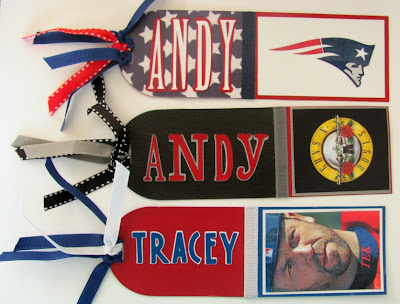 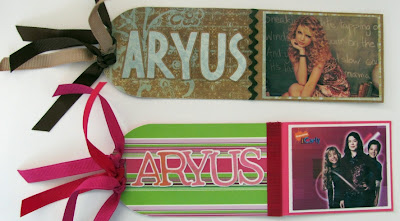 It's amazing how fast the day goes by when I don't have to go to work. Melissa and Trevor didn't have school today either but other than feeding Trevor they were pretty self sufficient!
Tomorrow we are supposed to go to a family reunion after football. I hope I'm feeling better.
Pin It
Posted by Julie H at 6:19 PM

Head butting your son ... how awful!
Glad the punished the little bugger who did it.
Hope your chest is feeling a bit better now.
Love the Bookmarks.