I Have A Princess

Well those of you that I talk to other places already know how beautiful my daughter was last night for Girl's Treat! She started off the morning by getting picked up by my niece/sil to get her nails done. My niece paid for it even, which was really nice of her.  Then later Jessica's friend came over and helped her do her hair.
She got all dressed and we went to pick up the boutineer. I had asked her earlier what time the flower shop closed and to call and make sure. Well when we drove up the store was DARK, parking lot abandoned and they were obviously CLOSED. OMG!! Talk about a little panic and tears! I had got out and went up to the door hoping I could maybe see someone inside but no luck. When I was walking back to the car there was a man standing outside the tuxedo shop and he waved to me and said "I have it!". The lady at the flower shop apparently gave the boutineer to him. What luck!! I thanked him like crazy and will definitely have to call and thank the lady from the flower shop for doing that for us!

Then it was off to the house where the group was meeting up. We got there and took a lot of pictures. Sadly a bunch of mine turned out blurry. 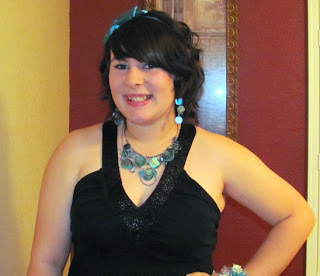 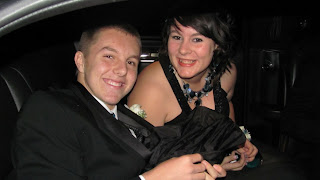 They took a limo to another city and went to dinner and then drove around (there was 4 couples). Then came back and went to the dance. 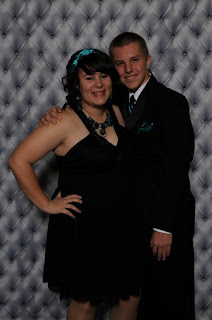 After the dance they went to another girl's house and her mom made waffles! I picked her at 1:30 am. She said she had a lot fun!
Little side note, Jess was originally supposed to go with another group. Her "friend" went all mean girl on her and said that some people in the group didn't want her to go. She asked around and of course everyone denied it, which pretty much made it seem that the "friend" was actually the one that didn't want her to go in the group.  I wasn't too fond of the idea of what their group was planning to do anyways. They were going to get a party bus (way more expensive than the limo) and go to Santa Cruz before the dance. (Which is a couple of hours away). She decided to just not go with that group, because really who wants to be with people that are mean? So anyhow, last night, that groups party bus broke down on the way to Santa Cruz and they missed the dance. Karma much?
Pin It
Posted by Julie H at 11:49 AM

Your girl looks gorgeous... and ha bloody ha about the bus!

Love the color combo--the blue is great with all the black.

Don't even get me started on party buses. Just no.

Ouch. Karma or not a broken down party bus will ruin your night :) I had that happen to me once but luckily that party bus company had another unrented party bus during that night.