Today I took Trevor to the doctor to get checked out. I love how when you go to the doctor you have an appointment time at say 10:20 but you don't actually see the doctor until 11:00. They have only been open for like 2 1/2 hours how do you get so far behind already?

Trevor entertained himself on the doctor's stool. 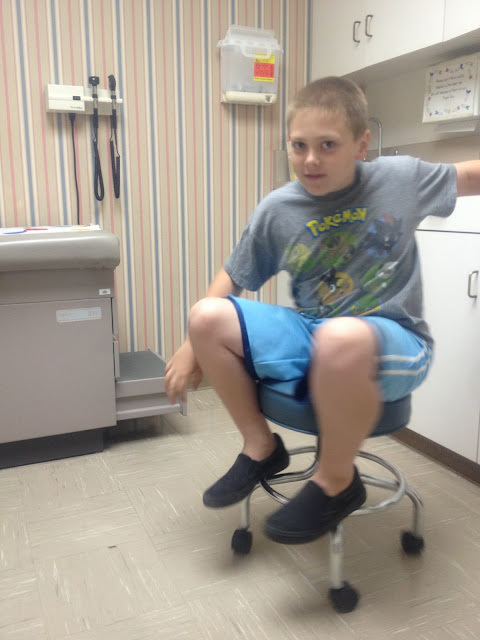 I'm pretty sure at least one of my kids have wiped out playing on those stools over the years. They love spinning around and zooming all over the floor in them. Guess that's one way to be entertained while they wait.

Even though he has had a plugged ear and coughs she said he just had allergies. Alrighty then. She did take his blood pressure and it was 90/50. After that she had them do an EKG in the office and she said that was fine. 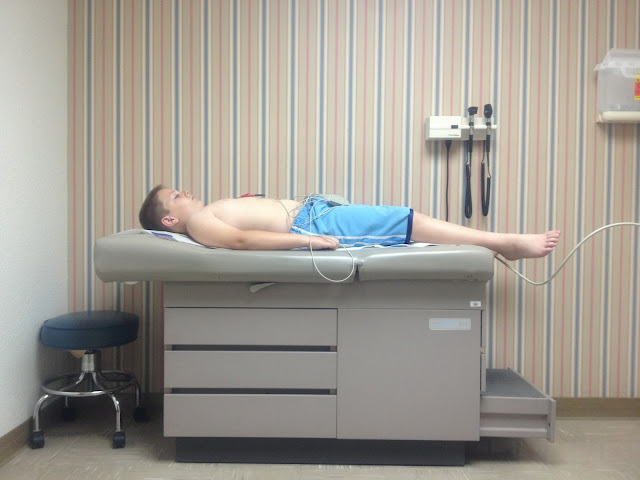 It's kind of freaky seeing your kid all hooked up. She ordered a blood test just in case to check everything out so we'll go do that in the morning since he has to fast for it.

After we were done we went over to Target to pick up some allergy meds and then went to the Mongolian BBQ for lunch. He wanted Chinese food, this was my compromise. Me=bowl full of veggies him=meat and noodles. Such a guy. 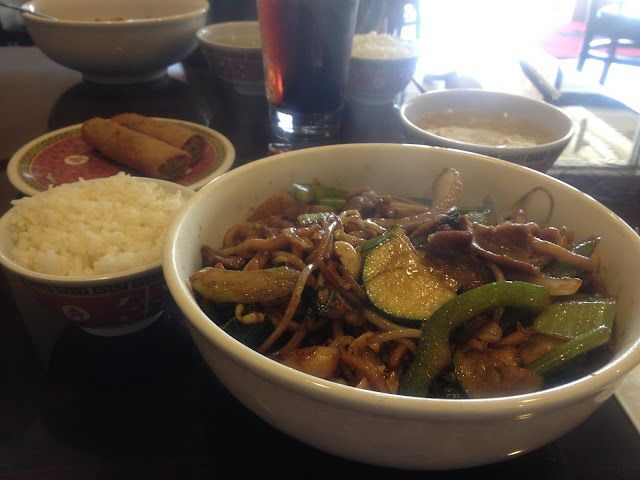 I was totally stuffed when we left and probably should have stopped eating  half way through the bowl. Guess I'm still apart of that clean plate club.

When we got home I thought about cleaning but instead started reading my book club book. Which means I took a nap and then read my book. I just finished it hours later.

The book we are reading for this month is A lot of people in the reviews didn't like it but I thought it was pretty good. Nothing too heavy. Lots of sex talk though (and it is written by a guy or 2?) so if you don't like that kind of stuff it's not for you.

The book is set during WWII, in a house full of people. There is a mom and her 6 girls (I think it's 6), 2 husbands, an uncle, a granddaughter and of course the elderly maid and her great granddaughter that is there helping her out.

That's a lot of characters. Each part of the book is written by different characters and switches back and forth. I kind of liked the different perspectives. It was interesting enough and held my attention throughout the whole book. I feel like it might be having a sequel the way end is kind of left open. I don't want to give too much away though!

Now my back is all stiff from laying around reading all day!

We don't really have any plans for the weekend, which is REALLY nice. Just the blood test in the morning (pray it's all normal) and my long run on Sunday. That's it! I might actually get some laundry done this weekend. I need to de-fur my bedroom again. All the animals love my room and I feel like there is a coat of cat & dog hair on everything. GROSS!