Weekend Re-Cap, It's a Goodie.

Saturday morning we got up around eight and then I took Trevor in to get his blood work. The receptionist there was a total beotch. Seriously if you hate working with people you should NOT have a job where you have to deal with them. We got that done soon enough and then we came back home to Scott's wonderful weekend breakfast. Every weekend he makes us a big breakfast. I love it!

We then spent most of the day cleaning the house. I probably spent two hours in Trevor's room helping him clean. You can actually walk in there now and I've found all our missing forks.

That night we went and met some friends down at the bar to celebrate "Quatro de Mayo". They had a dinner but we just went down for the margaritas and Corona's. We spent most of our time sitting out on the porch. It was such a nice night. Perfect weather and for some reason no bugs! 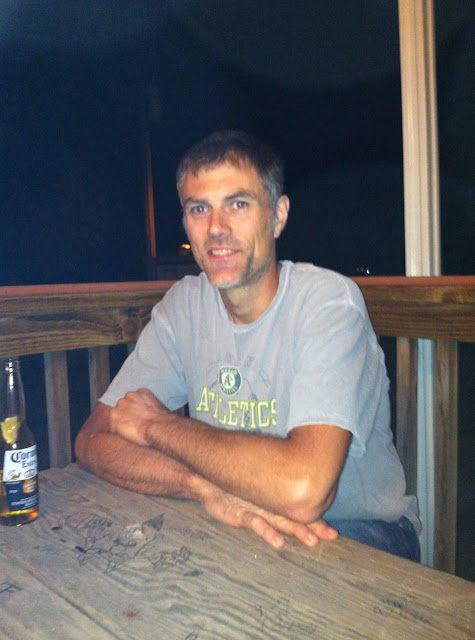 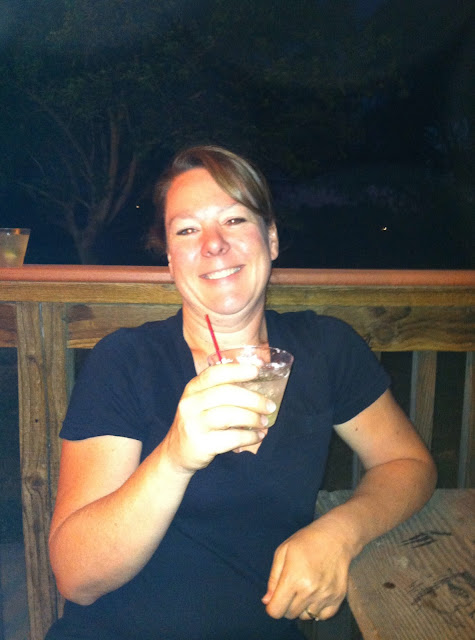 We did go inside for a bit and did a bit of dancing and posing with these fun cut outs they had. 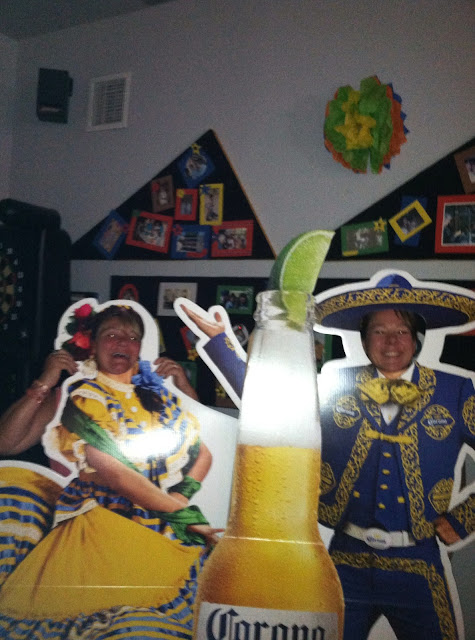 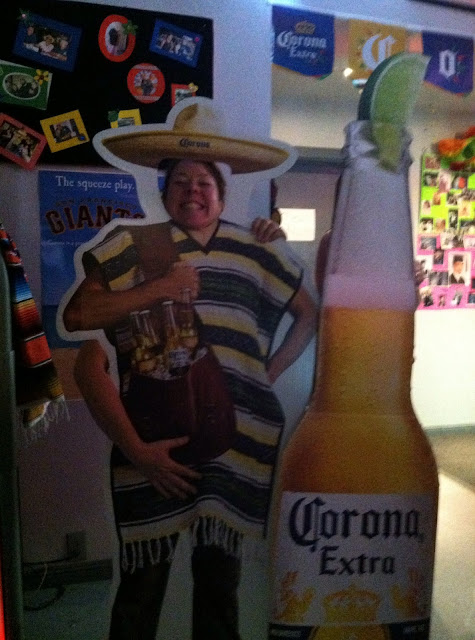 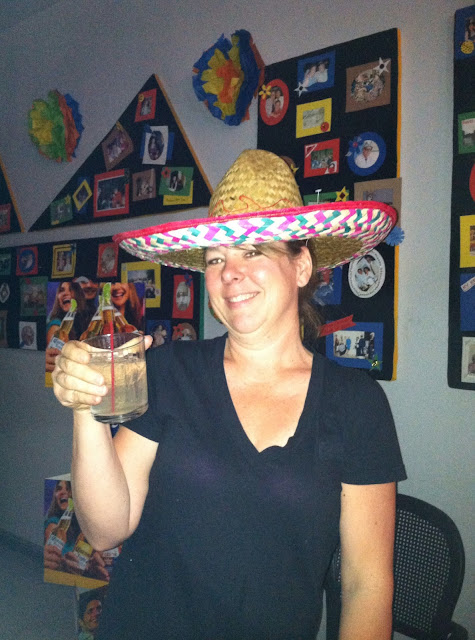 Scott and I had walked over and when we left we took the short cut through the field and Scott was giving me a piggy back ride. We were laughing and having a good time joking around.

Then I came to at home all scraped up?

Apparently I fell OVER his shoulders and totally knocked myself out! I don't remember falling or coming home. Somehow I took care of myself (even though later I got up to make sure I took my contacts out and I had), took some Advil, put my jammies on and slept with an ice pack on my head.

Scott said he though I had died at first. He said I was laying there and it took him awhile to get me to come to. He walked me home (the only part I remember of that was him saying "we're almost home"). Poor guy I scared the crap out of him.

I got up several times in the night to go to the bathroom, take more Advil, drink water, and put more ice on my head. I had my 12 mile run in the morning.

Probably pretty stupid on my part but I got up and felt ok so I went. Scott came with me and rode his bike. I told him if at any time I started to feel bad I'd sit down and he could come get me with the truck. Everything went just fine though and I did my first 12 mile run!! 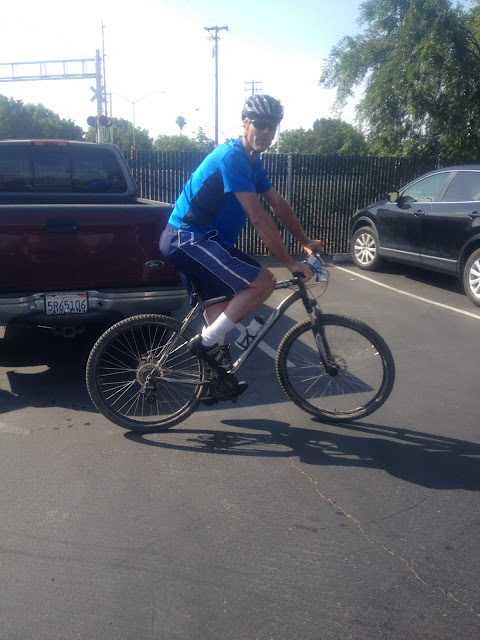 TWELVE MILES!! I can hardly believe that I ran that. I did do a tiny bit of walking because I ran with my step mom and she does the 20 minutes of running 2 minutes of walking while you sip some fluids method of training. I was really looking forward to those after about mile 6. Knowing you get to walk for a couple minutes makes it much easier to keep on going. I did do a couple extra ones towards the end and she went on without me. I was totally ok with that though I was just so happy and proud of myself to be out there DOING IT! My body is amazing!! 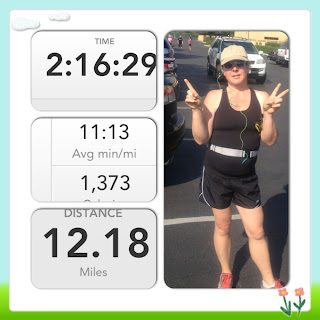 After we got done we went over to Scott's Mom's house to take his sister to the train. Everyone was worried about my face which of course, makes you more aware that you are pretty messed up. I put some ice on it while we were at his Mom's and snapped this picture. 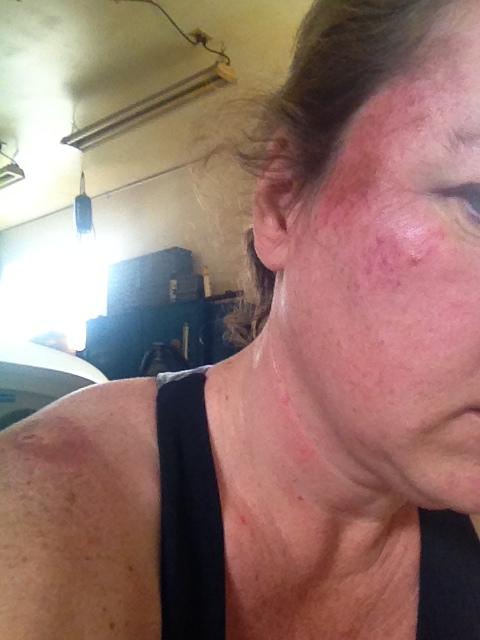 We took his sister to the train and then stopped to get some lunch. We found a Five Guys when we were looking for somewhere to eat. A lot of people had told me that it was pretty good so we tried it out. I ordered the bacon cheeseburger (I did just run 12 miles!) and we ordered a large fries to share (I really just wanted to split a small one but that is what he ordered). My bacon tasted over cooked almost burnt and the burger was pretty greasy. The fries were good though, although WAY too much. I ate a few and I was done. I think I like In & Out Burger better. Plus In & Out is way cheaper!


After lunch we decided to look for REI since they have the Wright socks that seem to help with my blisters. I only have one pair (those things are EXPENSIVE) so I needed to get a 2nd for when they are in the wash. Or you know, when the cat takes off with one and I can't find it. We found an REI and a Performance Bike AND another sporting goods store all in the same shopping area. We hit REI and then the bike shop and then I was pretty much done. So tired.

I slept for most of the ride home and then on and off after we got home until bed time. This morning I woke up and my eye felt swollen. I grabbed my phone and looked at my eye. F&ck me. 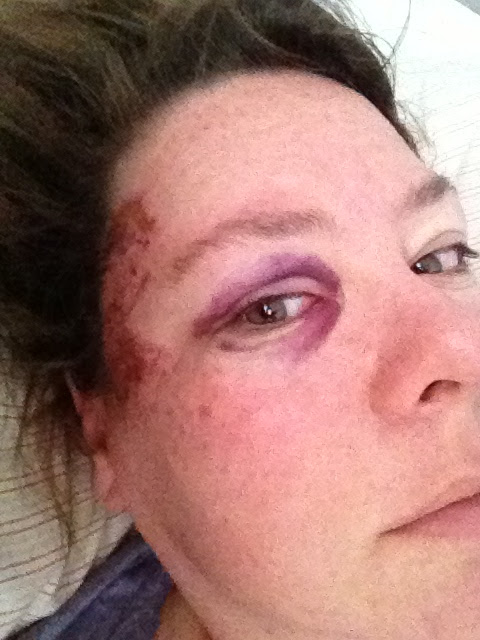 Can I just call into work "embarrassed"? I have no sick or vacation time and am already going to be a day and a half short from Trevor's little fiasco last week. Time to suck it up and put my big girl panties on and go to work. I thought about making up a great story about crashing my bike but I'm can't tell a lie to save my soul so I just went with telling people the truth on what happened. Any story that starts with "we walked to the bar" and ends with "I have a black eye" should be a good story for like EVER right?

Hopefully it doesn't take too long to go down. Everything hurt more today than yesterday and I really needed to lay down for a few minutes after work.

At last I know what I look like with purple eye shadow on now right?

Well, with a shiner like that, you could think up all kinds of funny stories to tell in how you got it. (o: Because everyone in the world will be asking you about it. Maybe you can enjoy entertaining others until it goes away!

I'm glad you are okay! I bet Scott was scared but what a great story. It happens to the best of us! :)

Oh wow!!!!! Glad you did not get seriously injured like a concussion or something!!! I feel so bad for you...definitely tell the truth though...kinda funny once the embarrasment wears off right?!! :-)

Ahhh haaaa, now I see how you got the banged up face!
Alcohol is the reason... well that and piggy back riding!