First thing this morning I checked the news on my phone. Yep, not going to work again today.

It occurred to me that hey now that I can get Obamacare if I don't work we can still have insurance! Maybe I'll just not go back to work at all? Although who knows how much that insurance would actually cost us. Has anyone been successful in signing up for it? I've been seeing online that the websites aren't working too well (which hello? those Federal employees shouldn't be working either, I don't care if its from a different pool of money).

I already took Melissa to the bus and let Trevor sleep in a little and will drive him to school again. His bus takes an hour to go 4 miles so I feel bad making him ride it if I'm home.

I've got my running clothes on for after I drop him off. I just looked up what my training run is today and it's 6 miles. Boooo I was hoping for 3 or 4.  Hopefully it won't be hot by the time I'm done.

Other things on the agenda today:

We'll see how much of that gets done! Trevor has some new Pokemon game for the DS that comes out today that he's been so excited for so we'll have to see if that is not sold out in the store when we go to town later.

I was thinking earlier about how when I was laid off a couple years ago I got so bored I reorganized Scott's tool box. Let's hope I'm not off long enough for that to happen again ;)

Check back later and see how things are going ;)
-------------------
Back from my 6 miles run after about 3 1/2. Kind of forgot to eat breakfast and I was feeling light headed and my freaking knee was hurting. I think I kind of abused it when we were dancing on Saturday night. I hope that doesn't last too long! Oh well 3 1/2 miles is better than a sharp stick in the eye.
---------
If anyone likes to eat off floors you can ALMOST eat off the floor in my entry way now. Who knew it only takes 10 minutes to clean half the grout with a toothbrush? Don't worry I didn't use YOUR toothbrush (this time).

Also? I think I found all my missing clothes. They were on a pile on my desk under a bunch of other stuff. Go figure.
---------
Well I got 2 hours of cleaning done today before Trevor got home. Then it was time for a shower and off to the store. We went to Target to look for his game but the guy working there said it doesn't come out until the 12th. He was a bit bummed!

While were were there I was walking down an aisle and I looked back at something and totally t-boned another cart! With little kids in it! OMG thought I was going to die of embarrassment. The little one started to cry and I was like OMG OMG I'm so sorry!! The woman was like um it's ok but I could tell she was a bit po'd. Whoopsie. Where did I leave that rock I need to crawl under?

After Target we hit the grocery store and then back home. We bought a few things to try in the juicer. We got some stuff out and then I was taking it apart and realized it had got clogged. I didn't QUITE realize when I took the next piece off that it was all going to fall out. DOH! 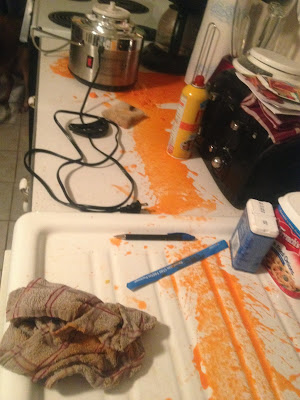 The trail is me trying to get it to the sink. Quite the fail. Oh well live and learn. Now to figure out how to not get it clogged like that.

Tonight for dinner which we just ate at like 8:00 because Trevor insisted that we try out that juicer right when we got home, we had Skinnytaste Baked Chicken Parmesan. It's so easy to make and supper yummy.  Probably should have put it on a different color plate for a picture though. 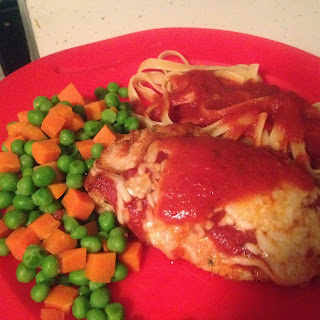 Oh and check out this cool cupcake holder they had at the grocery store. I wish I had room to store it somewhere. 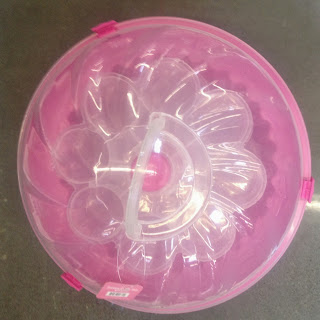 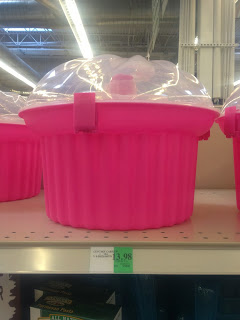 Now? I'm totally exhausted and ready for bed. I need to go wash up the dishes though. Night night!

silly girl - congress did this so obamacare won't go through.
no shit for you!! no work, no pay, no affordable healthcare.
maybe your congress person who is getting paid and not working can help you out. :-)