Well today is the first day of school! I think it gets earlier in the summer every year. My plan was to get up when Scott left for work today, but then he left an hour early which messed up my plan in my head. I tried to go back to sleep but it smelled so bad outside (I had my windows open). I don't think I ever really fell back to sleep and got up at 5:20. 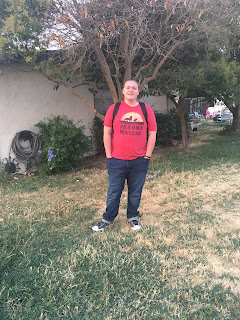 I drove this guy to school since he has a 0 period class and there is no bus for that. It was kind of nice having time in the car with him, although I'm sure after the first couple days we'll be dragging ass to get up in the morning lol. I'm so not a morning person!


We had a busy weekend. Saturday was Adrian's birthday party. Her birthday isn't until Sept 11 but her mom is having a baby on August 25th. We decided to skip the bowling part of the party and just go to the part back at the house. She is going to be 9 already. 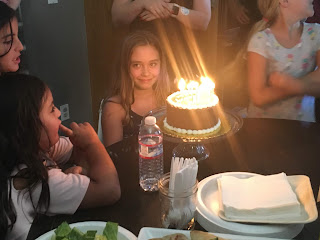 Yesterday we went to the A's game. We took Bart, then tailgated with the neighbors in the parking lot. We sat in the inside seats by the window. 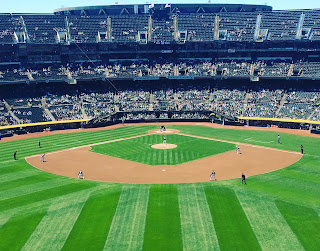 Only I could get sunburnt sitting INSIDE at a ball game lol. I think the sun was only on me for maybe an hour. I was a little cold so it felt good. Little did I know it was burning me. 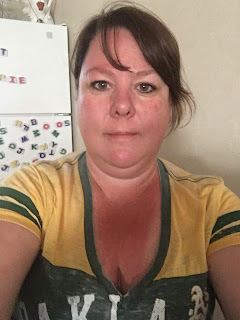 The game was a pretty quick one since the other team didn't get any runs. Trevor went with us to the game and thought it was pretty sweet sitting inside the fancy club room, I did too!

There is this neighborhood girl that people call "Drunk Debbie" (change her name, but you get the picture). She came in when the game was about 1/2 way through or so. She is such a loud mouth. Total low class. I guess she made some comments to Scott about his legs. He is NOT impressed with her lol. It just amazes me that people can be so rude and think they know what they are talking about when they comment on other people's medical problems. Like no one is telling you to get your brain fixed you idiot.

I was glad to leave right after the game was over. They were doing some kind of after party in the parking lot. It amazes me sometimes how much people can drink and still function and definitely should NOT be driving anywhere. That is why we take the train. We only had a little bit to drink when we were tailgating and that was enough. All these people are going to need new livers soon.

So trying to get back on the healthier eating wagon. I'm going to do no flour or sweets for the rest of the month to start. That will help me get away from my sugar addiction hopefully. Seemed to work last time. I felt so fat yesterday. I've got that huge roll on top of my pants back, it's lovely.

Just ordered a new computer (laptop) so hopefully that will come in the next couple days. I keep hoping I can get my Quicken to load my calendar with my bills on it but it doesn't look that that's going to happen. Guess I'll have to just figure that out again. Good thing I had paid everything early last week.

Have a good day everyone!

You sure did get burnt. Wow.
I can't believe how big Trevor is now. Boy I've been around for a long time now haven't I?
:-)