Today is either going to be a really good day or a really bad day. Today Jess will find out if she got approved for membership out where I live. She's been staying in my mom's cabin (just a little house but we call it the cabin). If she gets approved she can stay but if she gets denied she'll eventually have to move somewhere else. So fingers crossed it is good news today.
ETA: She got approved!! Woohoo what a load off that is.
Last night I finished up these masks I started last week. Mostly repeats of ones I've made before but I have started only sewing one up of a print until it sells (usually) 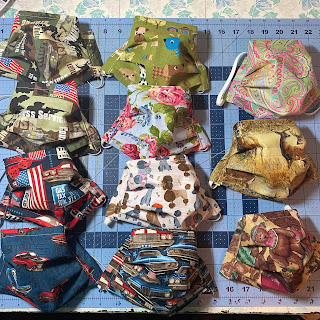 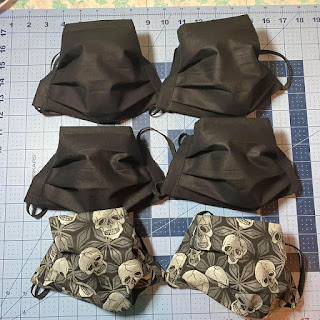 After I got done with those I decided to work on some more of the zip bags I used to make all the time. I have a ton of fabric cut out for them since I used to cut my scraps to that size. I sold tons when I was doing craft shows so I figured I'd just keep making them up. Now I haven't really been doing craft shows but at some point they will come back again. The gal that I did a lot with is still doing them in the malls but it is for the whole weekend and I don't want to do that and I don't think I want to be around that many people. She's doing them out by the movie theater too but I think it will be dead out there for the most part. Sometimes it was dead when there wasn't a pandemic lol. So I think I'll just make them up and put them up on my Etsy & Facebook for now.
Doesn't Tina look cute sitting all proper in the chair? I dragged these inside for Scott's little party and she claimed them right away. 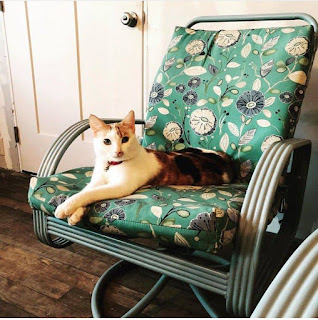 I was going to go into work today but I think I've talked myself out of it now. I have enough stuff to keep me busy at home. Maybe tomorrow!
Pin It
Posted by Julie H at 8:02 AM