We'll see how long Scott's mom makes it before she heads for the neighbor's today. I told him I was sick but I could still go over and he's like maybe just come check on her at lunch time. We'll see if she remembers. Doubt it. I don't really want to give her a headful of snot. So starting my not going over there a bit earlier than planned. I'm hoping this doesn't go to my chest but I kind of feel like it is going to. This morning I got up to go to the bathroom and I had a waterfall of snot down my face. So gross. Hopefully my mom doesn't get it since we were in the car together all day yesterday. As we were driving home my nose started misbehaving. Sigh.

Saturday we made it to Fallon with plenty of time and got to the hotel a bit early. They were like oh they are almost done cleaning your room maybe come back in an hour. To kill some time we went to a quilt shop we saw down the road (bought some stuff but I'll share later) and then to Safeway to get some food to bring to the party (it was potluck style). Then we went back and waited and the room wasn't ready. An hour and a half later it was finally done (so almost 45 minutes after check in time). My mom didn't want to just change her clothes in their gym area and go to the party so we had to wait. So then we were an hour late to the party. Which no big deal but the party was pretty much over 2 hours after that lol.

Only one of my mom's siblings showed up so it was just my Uncle Ronnie and his wife and us for my Uncle Don's side of the family. Kind of sad. Oh and his daughter Wendy who threw the party.

Wendy is like a year younger than me and her brother is about 7 months older. Her brother is a hot mess so he's not around. Sad. The brother has two boys but one lives in Montana and the other one had a prior obligation or something.

Poor Uncle Don can hardly hear so it's like YELL YELL YELL WHAT YELL YELL CONFUSION YELL YELL. Sheesh. I think I'd just carry around a white board at that point. It was nice though that he was all excited we were there and was very good to my mom. He is my Grandma Marilyn's younger brother and is 85. his wife is quite a bit younger, I think by at least 10 years maybe more. 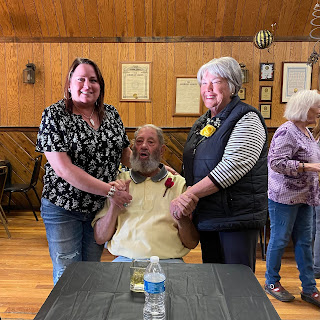 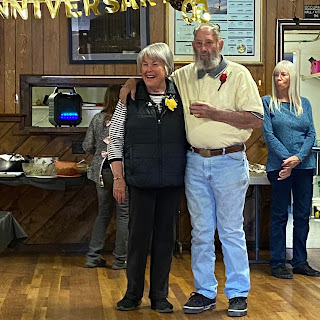 We took some family photos but the one ones I have this woman jumped in them so blah. If Wendy ever sends me some from when she pried the woman off his lap I'll share lol. After the party mom and I helped put the tables and chairs away and then went back to the hotel and just hung out. We talked about if we wanted to do something but neither of us really did lol. I'm pretty sure there was a dog in the room above us that was left alone and it ran back and forth across the room for quite awhile. Eventually I think the people came back and it stopped. What a weird noise to hear.

Sunday Uncle Don wanted to go to the cemetery with my mom so we met him there. My mom's favorite person was her Grandpa John and he is buried there (Don's dad). So we got some flowers and went there for SOME MORE CONVERSATION WHAT YEAH OK. haha. I didn't take a picture of the grave with my phone but I did take a picture of this one lol. (My mom took pictures of her grandpa's and I have one somewhere already)

I was standing there and was like Good God look at that tree. Then my mind goes to the roots and how they are all probably intertwined with the bodies in the caskets. 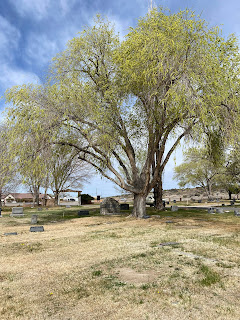 I went over to see how old these were 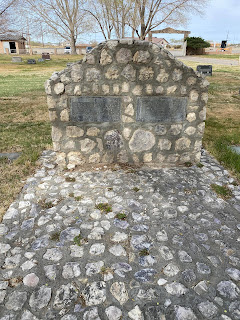 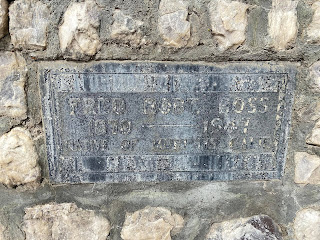 After we left the cemetery we stopped for breakfast in Fernley at the Black Bear Diner.
Then we went to Reno. We were going to go to that big fabric store but it was closed for Sunday. What? How sad and so bummed! Then we went to go to our favorite antique store and it was GONE! Sigh. So I googled antique stores and we found another great one to go to. While we were there they told us that the original one we were looking for had to move because the building got sold. They told us the new name and we went there too, woohoo.
I snapped a few pictures of interesting things. This computer reminded me of the ones we used in high school in my keyboarding class. I'm sure they were something close to this. Look at these giant geodes. I don't think I've ever seen any so big. This was at the 2nd one, I had to send it to Trevor there was a whole booth of knives. He likes to collect them. He's like a lot of those are illegal in CA. Of course! 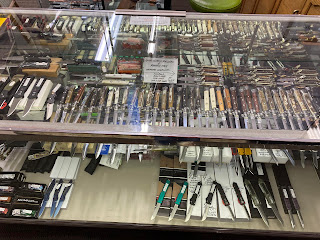 After that we headed home!  A nice relaxing weekend away. Too bad I'm sick now dang it! Scott finally sent his brother a text today to call him about me not watching his mom next week. I told him when he calls back tell him to go check on her later today (if she doesn't end up going to the neighbors first). This is probably all going to be a shit show.
Pin It
Posted by Julie H at 9:47 AM

I'm sorry you're sick!!
I also hope your BIL steps up to the plate.