Good morning happy Monday. Blech. Lol. Mondays are for the birds.
I had my morning nap on the sleeping couch here at mother in laws. She is still asleep although I'm pretty sure I heard her go down the hall when I first got here and was dozing off.
Yesterday I got the living room cleaned up and rearranged and then my mom brought over a daybed. Scott had snuck home for a few minutes and got there right before them so that was good. The bed fits exactly on the little wall in the living room. I should have taken a picture but I forgot.
Scott wanted me to go to the store with him so I followed him to town and around the grocery store while he got stuff for his mom's house. Then he left and I went to Wal Mart and got a sheet set and comforter for the bed. I was lazy though and never brought them in the house so I still need to make it up. I should probably run them through the washer first too. Scott was asking me this morning if I want to bring her over tonight and I'm like it is up to you. I think we are both a tiny bit scared lol. She's an ornery little thing when she wants to be. But we are both tired of not being home so something has to change. Seems easiest to just change where she is.
The rest of the day I tried to take a nap but only dozed off for a few minutes. This is the napping crew. They were so excited when I went into the bedroom lol.  Poor Rusty can hardly get up on the bed now, last night it took him a couple tries. 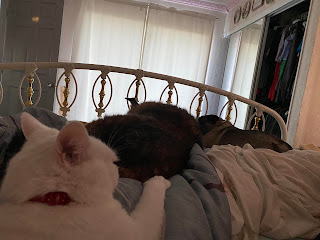 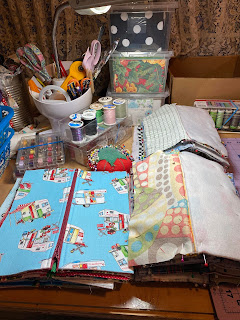 I realized yesterday the two craft shows I have coming up are BOTH in the same weekend. ACK! One on the 30th and one on the 1st. I'm going to die by Sunday night. The good thing is I can just load everything in the car after the Saturday one and leave it there I guess haha. That's a couple weekends away but coming up quick! I now have something to do every weekend for the next month. Booo
Pin It
Posted by Julie H at 9:14 AM