Good morning happy Sunday! Please don't go too fast today!  At least I am up and already have a cup of coffee. Yesterday Scott came home and worked on cleaning up outside around the garage/back patio & shed. He filled up the truck but decided to just leave his truck here and have me drive him to town (he has my old car he's been driving there).  I think he wanted to bring his truck back to the house anyways, less likely to get messed with here than parked in his mom's driveway.

Trevor and I took him back to town and went to dinner at La Villa. It took forever to even get a basket of chips, I think they had some new staff. Good thing we like that place and will wait lol. After dinner we dropped him off then Trevor and I went to Wal Mart to get me a new iron. The cats are always knocking my iron on the floor and killing them. This time it wasn't even knocked over (at the moment) it just wasn't heating up. So we got another iron then spent about $150 more dollars on 3 new trash cans and some misc stuff lol. Trevor hated our trash cans for some reason and kept bugging me to get new ones. We got 2 nice ones that open when you step on them and then a regular one but I think I will go get one more that you can step on since it will fit in the spot. I have one for regular trash, one for the curb side recycling and one for the recycling we take in for money.

When we got back I just worked on my sewing stuff until I got to a stopping point and it was also 10 so I was like I guess I should just go to bed. Hoping to finish up these vehicle bags today. I have a stack that are cut out but I am going to save for later since I have a bunch done already. I think when I get these done I'll work on some keychains for a bit.

My rose bush out front is going crazy. My yard has been totally neglected and apparently it likes it that way haha. This thing was like 1" tall when I got it in a teeny tiny pot for mother's day or something. It's amazing that it has grown so many years. Sometimes the flowers are more pink and then sometimes yellow right now they are orange. Weird! 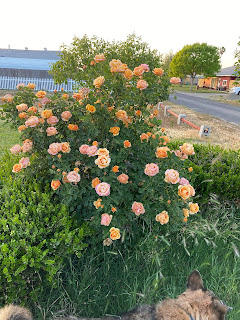 This morning Scott said he found where all the spoons keep going at his mom's house. She had been wrapping them in tissue and then putting them under her pillow. When he took them out she told him noooo she needed them. He said they'll be in the drawer when you need them. Minds are freaking crazy sometimes I tell ya. I knew she was hoarding spoons before too since I had found about 5 of them stuck in this toilet paper roll she uses as a pen holder on her little tray.
My ears are just a bit plugged up this morning so trying some over the counter generic Zyrtec I bought to see if it helps. I started using my inhaler the other day and I think that is helping a bit too. Maybe eventually I will not feel like I'm sick. Getting closer. This last one was a doozy!
My friends have been using this carb tracking app and having great success on their diets with it. I downloaded it this morning to play with. I am making stew for dinner tonight since I didn't make it last night so I know that has a lot of carbs but that's ok lol. Gotta work my way back into eating better again. I ate crap for the last month or so with being depressed and then getting sick.
Hopefully today will be a successful sewing day!

The spoon thing is weird. Then does she take them back out of the drawer after you put them where they go?
I bought the best ever iron.(rowent) Then I knocked the iron board over and I watched it bounce across the floor. It came apart but I put it back and it still works!