Helloooo happy Saturday! The day is almost over and I have done nothing but have fun playing with the little one of a bit and help contribute to the truck load of stuff for the dumps Scott is making. Oh and found the top of the kitchen table so I guess I did some stuff ;)

Yesterday I went to work for the day. How different life is going to be going back to work every day soon. Not all bad though it is good to have a routine and talk to people in real life. I love to organize stuff and MAN is there stuff to organize at work since we've been gone so long. Hopefully I don't kill the printer catching up printing stuff out soon. Yesterday I mostly just worked on finishing up the new apps that have become contracts. That is my favorite part, moving it from the app shelf to the contract shelf. It's like ahhh we did it! Yes I'm weird.

After work I went to the grocery store. I realized I am only cooking for Trevor and myself, what do I even buy? So weird. I managed to pick a few things but didn't buy any junk so I won't eat it. Tonight I am going to make stew since that was the only meat left in the freezer before I went shopping and I had defrosted it.

We thought my mom was going to bring her trailer over today but I guess she decided to wait until next month since we've been sick (she got a little bit sick from me). I sent Scott a text this morning but apparently he didn't see it so he showed up. He started to work on cleaning off the patio area but he's now been in the shed and garage cleaning stuff for a dump run. Whatever, clean that shit out!

Jess came over for a bit with little Daniel so we sat and talked to them too. Then I was hungry so I had some soup and now it's 2pm. Eventually I'll make it in to work on my sewing projects!

I went to Joanns on the way home yesterday and got some interfacing and batting so I'm back in business to work on stuff. Next weekend is going to be crazy busy.

Jess shared this picture on Instagram. That is me and her on her and then her and Daniel. I'm only like 20/21 in this picture, such a baby. Jess is 25 in hers. I used to love those little sweat suits. They probably wouldn't be considered safe now since they had little hoods on them. We had a whole bunch of them from Wal Mart, some were Garanimals. So cute. 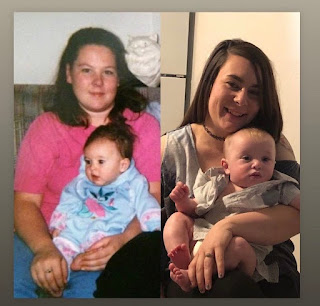 Ok off to do maybe do something productive. Maybe.