Good morning happy Saturday! Yesterday I worked from home all day. Started to do some cleaning but then Scott came over to escape his mother for a bit so cleaning went out the window. Jess brought the little one over so Scott could see him. Toy explosion haha. I keep thinking I need to pull out the little baby toys but he still likes some of those too. 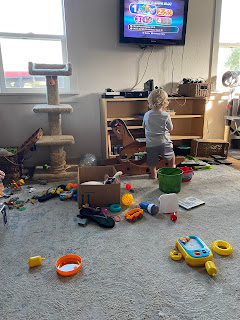 Trevor and I had fish and chips from the bar/kitchen for dinner. When I went to pick it up the bartender had a drink half made for me so I went ahead and got one. Then I was drunk for like 2 hours since I hardly ate anything all day lol. 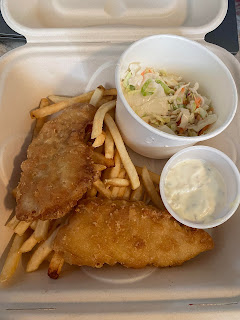 Trevor got a meat grinder he bought off Amazon. He didn't have any meat to put through it so he used SALAMI. I swear he cracks me up. One more thing for him not to wash. He's going to have a whole kitchen of small appliances if he ever moves out. 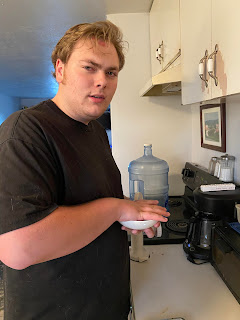 Jess and I made a list of things for the store when she was here and then she went shopping. I went over to her place to get the stuff for my house and ended up hanging out for a bit to play with the little one. Mostly just watched him play but he was having fun zooming all over.
Today is the club Easter Egg hunt and it is currently sprinkling. Kids are going to have some wet feet lol. The egg hunt isn't until 1 so hopefully it stops and dries up a bit before hand.
Going to start cooking some stuff in a bit here. Macaroni Salad, Potato Salad, some beans and cupcakes. That should keep me busy for the day.
The kids are going to dye eggs at Jessica's house after the egg hunt so only my messes to clean up here today.
Oh Scott's mom had a doctor's appointment yesterday. Scott started getting her ready way before and 10 minutes before her appointment time she got in the bathtub. What the heck? He was livid lol. She hasn't tried to bathe herself in years (that we know of). So he had to reschedule for this morning (apparently they have some weekend appointments). He's already complaining about her. Wonder if they'll make it there or not.
Ok that's all I've got for today! Have a great Saturday!
Pin It
Posted by Julie H at 9:09 AM

Is Scott living with his mum to care for her? I really need to catch up on your blog!