Good morning Happy Friday!
I was going to say how much better I am feeling but now I'm processing all the snot that must have accumulated while I was sleeping. At least I slept a bit though. Last night I finally felt well enough to wash some dishes and took a shower. I don't think I have anything to go to the dr for since my mucus is clear and I don't have any pain in my chest like bronchitis usually brings. It's just kind of like a flu without the fever. Weird. I just did some nose spray, probably take some Sudafed in a minute. Hopefully that will do it for me.
I have one more thing I bought on our weekend away, I got this cool rock egg. It was only $5 so no big deal if I decide I don't need it later. 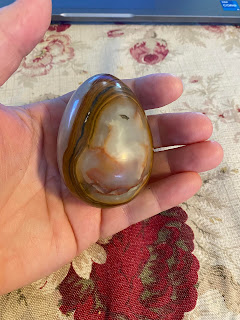 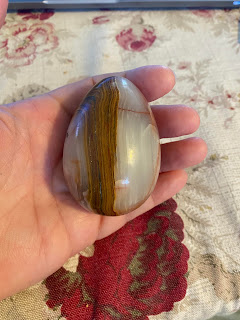 Look at Lucy all pretty on the bed. She has her ears slightly on alert though. 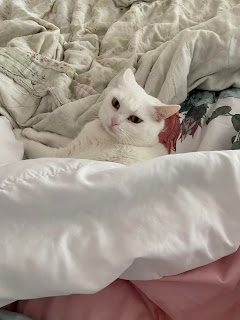 This was Rusty when I woke up this morning. He's back to getting on the bed although he did leave for a bit last night, I think he got too hot. I brought the big dog bed into the room for him but I'm not sure if he layed in it. I think he gets too hot in those too. Cracks me up with his legs all hanging off the edge. Of course he is laying where my feet should go. Good thing I have a whole CA King bed to myself now. 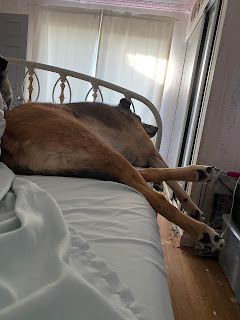 I am debating on cancelling my Direct TV. We only really had it for Scott to watch baseball now and he's not home. $120 and we don't even turn the tv on.  Talking myself into it. I could put that money towards one of my bills and get them paid off faster ;)
Yesterday this guy we know commented on one of my fb posts (being kind of rude but he thinks he is funny) and then Scott comes by and leaves another stupid comment. I'm like geeze nice of you to leave a comment on this one thing being a smart ass. I used to do those 10 days of you and your spouse type posts and crickets. Never comments on anything but if he can look funny to this guy he posts. Super annoying. I don't know why I let this kind of stuff get to me lol.
I have like 4 emails to work on so far today. We'll see if it gets busier. I was supposed to go into the office today but got a pass since I'm still sick. My friend Eric had to go back to work and he has a long commute. He's like had to drive in to do exactly what I did at home. Then today he drives in and the network is down. It's seriously stupid that the government isn't going with this work at home thing full time, they could save so much money on office space.  If we've done it for 2 1/2 years obviously it can be done. But it won't be much longer.
Ok that's all I've got for today. My house feels all clean now since I washed the dishes haha. Funny how that one thing makes the whole house seem dirty. I'm going to try and get some energy up and vacuum later and pick up a little. The house is still pretty clean from last week so it shouldn't be too bad.
Pin It
Posted by Julie H at 9:05 AM