Good morning happy Saturday! Today is my 30th high school reunion. I'm getting old I tell ya! Hopefully other people are fat like me this round haha.  Yesterday after work I went on a quest for a real bra. This pandemic has killed my desire to wear anything restricting. I ended up just going to Wal Mart first because usually I end up there after I can't find what I want everywhere else. I figured I'd start cheap and move up haha. Anyhow I actually found 3 bras that worked but I'm sure I'll hate them after wearing them for a few hours. We shall see. I got 2 pairs of jeans, one of which rang up at $1 so If I decide I hate them later they can become some cheap fabric for a craft ;)
After Wal Mart I tried to go to the mall but it was 7:47 and it now closes at 8. I will be surprised if our city mall is still around in 5 years. I wanted to go into Carters and see if they had some preemie clothes. My brother Joe and his wife might be taking in a new baby! Her sister who was estranged due to drug use apparently had a baby but then just abandoned her at the hospital. Sad for everyone involved. The sister was such a fun person before she went down this path. I can only imagine how painful it must have been to desert her baby. The baby weighed 4 pounds when she was born so just a tiny little thing. They just found out and someone was going to go do a home inspection last night so I imagine the baby will be there shortly.
Anyhow, no preemie clothes. Nothing at Wal Mart or Target. I did however pick up these amazing little booties for my Lilly. Gah so cute. I got some outfits for the new baby to drop off and some preemie diapers, a bunch of bows for Lilly and a Buzz Light year & Woody pj's for Daniel. That was fun. Oh and I bought myself another new bedspread since the last one ended up at Jessica's house. Now that I might want to sleep with something besides a sheet I don't really want to put the old ratty one back on the bed. 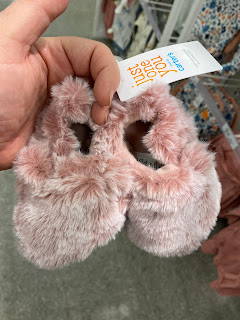 I finished all the Princess bags yesterday, this is a sample of the different prints. Tinkerbell, Tangled, Snow White, Sleeping beauty all done. 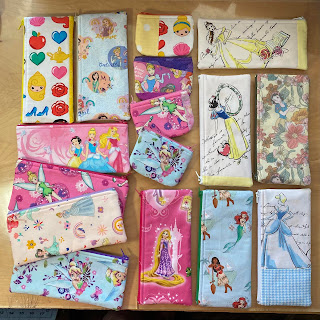 Now to finish the keychains. They won't take long to finish from this point. My goal for today. 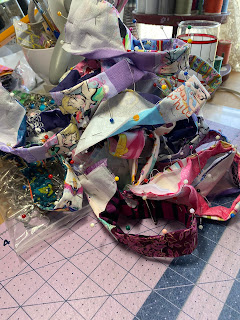 Scott came out last night to see some friends at the bar and I went over there. He came back and ended up spending the night. It feels like we are kids and he has to sneak back to his mom's house haha. I asked if anything exciting happened while he was gone and he said no so that is good.
Ok off to finish up these keychains!
Pin It
Posted by Julie H at 10:03 AM

I hope that baby goes to his/her aunt and your brother. I also hope the sister doesn't come back one day and want the baby back. Had that in my family. Nightmare for all involved. My advice - get a lawyer so it can't happen.