So Thursday was our big Scrapbooking Retreat! That morning I had called Dee to ask her a question and she started talking about this "big storm" that was going to be right over where we were going for the weekend. I of course shrugged the whole thing off thinking, storm shmorm, we're going to be inside SCRAPBOOKING all weekend!! Let it rain!! I got all my stuff packed up and put it out on the porch since my ride was going to be there soon. Of course I got in the house and come back outside and it's starting to rain. So back then I have to lug everything back in because it of course, can't get wet. So we go and meet up at Carolyn's house and caravan on our way. We stopped for lunch at Mimi's in Dublin.

My friend Dee had gastric bypass surgery last June. Most people know that after you have that surgery you eat about as much as an infant. So she usually orders off the kids menu and has no problem. In fact last time we went somewhere we ate at the same Mimi's and it wasn't a problem at all. Well this very UNhappy waitress said she'd have to ask the manager first if it was ok. So she comes back and says that she can have the kids meal at the regular meal price. Um ok WTH? If she wanted the to pay the big meal price she'd order the big meal, why would you pay that for a smaller portion? So of course she says that's ok, she'll just have a water. I told her I'd share with her and we got an extra plate. So we all gave her a bit of what we had and she had plenty to eat and guess what?? The bill was smaller and the tip was MUCH smaller! We were all discussing how easy it would have been for her to just put in the order for a kids meal and no one would have known anything different. Guess it pays to be nice!

Anyhow it was storming up a storm hehe, on our drive to Bodega Bay. We got there and it had stopped so we didn't get rained on while bringing all our things in. Not too long after everyone arrived WHAM we had a HUGE storm!! The wind was blowing like crazy and the rain was hitting the window in huge sleets. We all felt nice and protected in our wonderful rental house though, so I know I wasn't worried and I doubt anyone else was. We all scrapped the night away and went to bed. 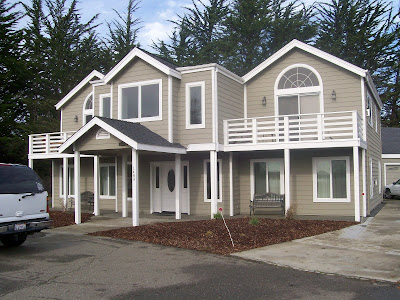 Sometime in the night I hear a loud BEEEP. We all got up to NO POWER. Bummer! No coffee?? WTH?? What was supposed to be for breakfast again??? DAMN!! So after a bit of rearranging we had a continental type breakfast; muffins, danishes and croissants. I had the lunch duty so we had my sandwiches, potato salad and green salad. Dinner, we were SUPPOSED to go out but decided that it was a bit too icky to go out. So these gals decided they'd make the chili ON THE BBQ. Somehow they made chili and cornbread on the bbq. 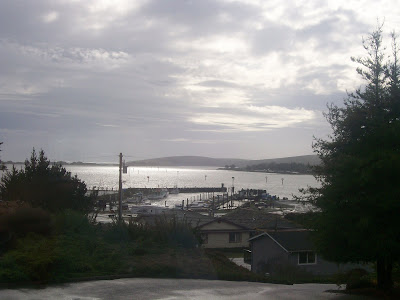 It all turned out great! The next morning (yes I said the NEXT MORNING, still no power) someone made cinnamon rolls on the bbq with the same method that they used for the cornbread (cookie sheet with water and then setting the cooking pan inside that). 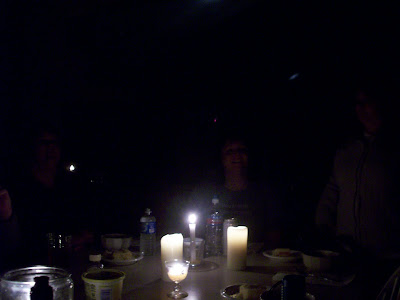 YUM, it's like camping inside lol. Carolyn made her pasta salad by soaking the noodles in hot water and it came out great. That night (yes STILL NO POWER) we had the left over sandwiches heated up on the bbq to melt the cheese all together. Just as we were sitting down to our dinner the power came back on. ONLY 36 hours later!! What an experience that was!! 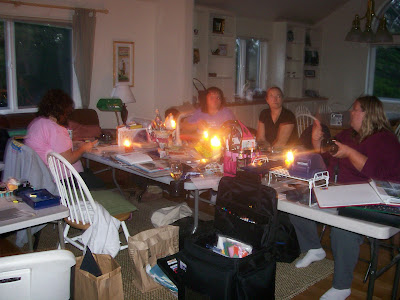 I still can't believe that that whole time no one from the rental agency called or dropped by to see if we had everything we needed. That just is such poor customer service. We had to drive down to a store to buy some ice and candles during that time to keep all our food cold and so that we could scrap "by candlelight" (and no it wasn't too romatic!) 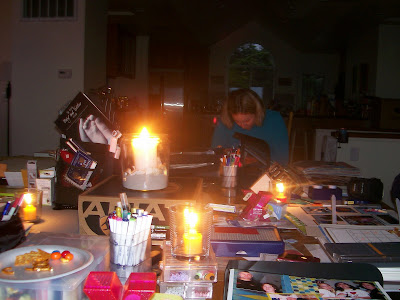 All in all it was still a good weekend but next time we go somewhere I hope that there is electricity the whole time we are there!Pin It
Posted by Julie H at 8:33 PM No comments: