Since I'm always complaining that I'm bored at work I'm finally getting some more stuff to do. Kind of. It seems a bit half assed while it's getting going. BUT I got to go on a training! And it wasn't even in Davis. We have an office in Salinas which is by Monterey. The girl that I'm going to take over part of her job (one tiny part of her job) works there. So I got to go down and spend two nights in a hotel and play around in my off hours. I decided to take my own car because it's just easier that way (don't have to have someone take me to work and pick me up since we don't want to leave my car in the work parking lot). 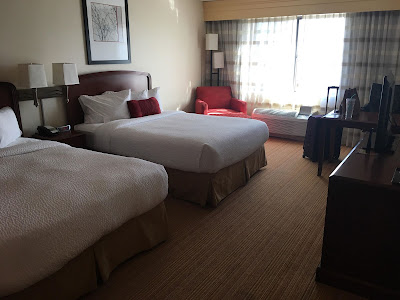 ahhh there isn't anyone yelling at the TV or video games here.. 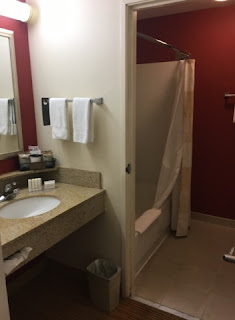 So I drove down Monday night (after Easter, that was poor planning on my part) and I got situated in my hotel and then I proceeded to watch a bunch of episodes of Escaping Polygamy and nap. Woohoo such the party girl. In my defense I was really sick Wednesday through Friday, cleaned all day Saturday and half the day Sunday, then had 25 people come to my house for Easter. I definitely deserved that napping haha.  At like 10:00 I was like ok I should probably go get some dinner so I drove out to Taco Bell (TG for GPS these days, makes everything so easy). 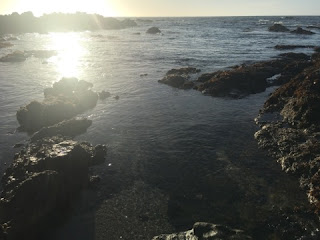 Tuesday I had to be there by 8 and we did some one on one training all day. But it was Tuesday so I went with some people for a Taco Tuesday lunch.  While I was working my friend drove down to stay with me for a night in the hotel. She drove by the place I was working and got the hotel key so she got some relaxing time in until I was off. 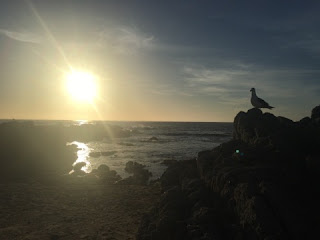 After work we went for a ride to the beach for a little bit of tide pooling. We got some food on the way there so we ate on the beach watching the sun go down. She had never been to Monterey so we did a little driving tour and then back to the hotel for maybe cocktails but turned out to be just being lazy and watching TV and snoozing lol. 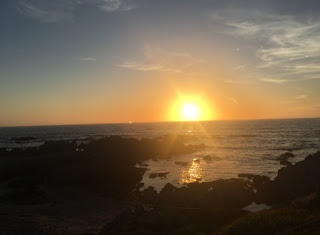 Wednesday more training and got taken out to Chinese Food for lunch (I got paid for my meals but everyone kept buying them for me lol). The girl training me kept telling me I need to make sure I go slow when I do this stuff and I'm like why are you making it so difficult. Basically what I'll be doing is office will order office supplies, I push the button for them to go through and then I have to make sure and get their packing slips and that the orders were right, put them on a spreadsheet and then reconcile them later on the bank website. Easy peasy. So once the girl that is going to approve what I do gets trained up we might be actually doing it lol. I swear everything is always ass backwards in the government. 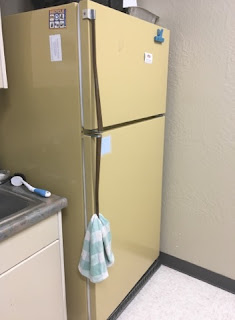 Check out this old fridge in their break room, It had the old metal shelves in it.

After work Wednesday we did some thrift store shopping. There was a Goodwill Outlet "the bins" as people call it, right next to the office I was working at. I was excited to check it out since I've only heard about it. They sell by the pound. It was definitely a little dirty and I was wishing I had gloves like some people wear.  There was one lady just standing over a bin of books scanning them all with her phone to see what they sell for. She had 2 carts, one was completely full. She'd scan and cart or toss into another bin. I figured if there was anything good in there she already got it lol.

I spent $3, well $2.97 but the guy didn't even offer me my three cents. That really annoys me but I didn't want to make a scene lol. Plus I was practically getting stuff for free (which is really the way they should sell all their stuff instead of marking so much of it up).

After a bit of shopping my friend and I parted ways. I took my time going home and stopped at Casa De Fruita for some dinner.

Ugh Scott is grunting and hobbling around. He said he stepped wrong off the train. Should be good for some knee surgery or something. He never just gets a little bit hurt. Of course he didn't even take any Tylenol let alone anything else. Wouldn't want to help yourself out or anything. Sign me up for another work-cation lol.

The Bunny Is Coming

As usual I'm so far behind on posting. I have a bunch of birthdays to post one of these days.

Next weekend is Easter, which of course is at my house. This sparks the annual OMG my house is disgusting and my yard is a mess panic.

I hired Jessica's boyfriend to do some yard work for me which took 100 lbs of pressure off of me. There is still a bit to do but the huge mess in the front yard is tamed a bit.

Yesterday I got rid of our dog pen. My "you haul" ended up being Scott, Daniel and the other guy having to take the thing all apart to get it in their teeny tiny trailer.

Today someone is coming to get the lawn swing that has been broken for almost a year. I told Scott someone was coming to get it and he says "I was going to fix that, I got the stuff to fit it." I told him he could take the stuff back lol. At what point were you planning on fixing this thing? 5 minutes before people come over? It's huge and I can't move it to mow under it by myself. I'll be glad when that's gone.

Usually he makes coffee in the morning and breakfast but I think I'm being punished. "We have no water." Oh look the faucet works. I think we might not die drinking sink water for coffee today.

And it's not even 9 am people.

My new life goal is to make things simple. Minimal yard work, minimal things to dust. One can dream right?