I was talking to my mom today on the phone. After about the 10th time I said "when I was at the bar" I started thinking that I've spent a lot of time at the bar lately. Hmmm. Well you can't blame me too much can you? I do have that teenager. (I'm planning on blaming everything on her for the next 2 years, get used to it)
Anyways, the other day when I was AT THE BAR one of the ladies in my line dancing class came up to me and told me that they are starting a Zumba class at the club house on Tuesday nights. I had heard the name Zumba a few times from a gal at work who had told me many times with a longing in her voice that she "really wanted to take a Zumba class".
I was like oh cool! And the first class is free and my friend wanted to go too. I don't know what I was expecting. I think something a bit like our line dancing class. You know, show us the routine and then we slowly learn the steps and work on it for about an hour and then by the time class is over I can finally do it!!
Zumba?
SO NOT THE WAY IT WORKS.
I got down to the club house with a few minutes to spare but they were already lined up and the instructor was giving a few instructions but I wasn't sure what she was saying. The next thing I knew? We were jumping and swaying and leaning and pumping our fists around and I reallydidn'tknowwhatfuckIwasdoing.
BUT it was kind of fun. I felt like I was at a concert, minus the band, jumping up and down and around and just having a great time rocking out.
I'm just hoping not too many people were paying attention to me. 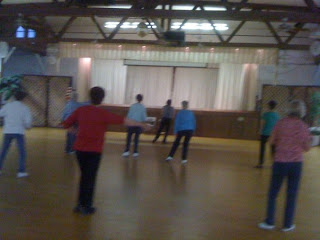 And that those old ladies in the front there don't hurt too bad. 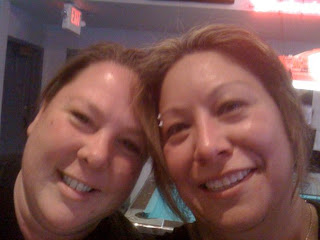 Cuz I know my friend and I sure got a workout!
(picture may or may not have been taken in the bar afterwards...)
Pin It
Posted by Julie H at 9:30 PM

That sounds like fun (Zumba). I've been curious about it lately too. Especially if there is a BAR involved!!