I Need A Pool

I can't believe it's already 10:30. The days have been just flying by lately! It was SO hot here today. Probably over 110. Of course this was the day I had set up to drive the little truck that has NO AIR CONDITIONING to help my friend who is moving.

I drove to work and worked a bit but left early. We went over to her house and by the time we got there I was sooo hot. Did I mention that I don't really sweat so my body gets over heated and I just turn red and get a really bad headache? Lucky for me it didn't get that bad until we were almost done. We took all her recycling to the recycling center (she recycles things you don't even get paid for, what a good person!). She gave me all the money for helping her. Wasn't that nice? She just wanted to get it all taken in before she moves.

When we got back I borrowed some swim suit bottoms and went and jumped in her little complex pool with my shirt and bra on. We soaked a bit and then I went home in my wet shirt and the pants I came in. By the time I got home my shirt was almost dry (and I didn't ring it out when we got out of the pool). My head was killing me so I laid on the couch for a bit and finally felt better after eating some dinner. Although now my stomach feels a bit off again. Ahhh summer..

So in other news, this is what was out in the field this morning. 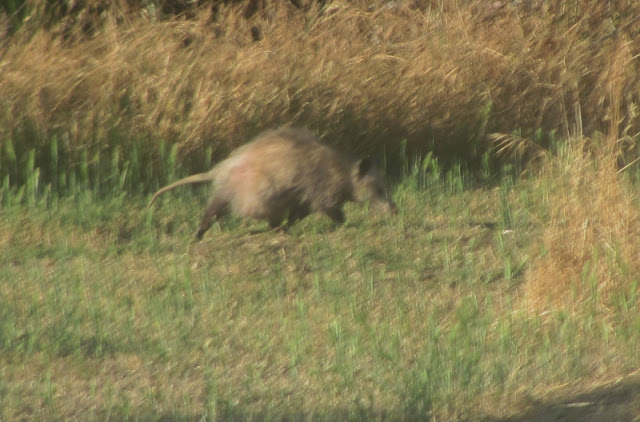 Not such a great picture but it's zoomed out the back door. Yes, that's an opossum. In the daylight. Aren't they freaking ugly? That one was SO BIG. It was about the size of a medium dog. There was a cat kind of stalking it but it was bigger than the cat! nasty things :shudders:

Well I'm about exhausted! Nothing planned for tomorrow except maybe working a little longer to make up for leaving early the last two days. The father in law is doing well and moved into a regular room. Hopefully he keeps improving. Scott said he was bickering with his mom when she was there visiting at the same time so that must mean he's feeling better :)Pin It
Posted by Julie H at 10:34 PM

Bickering usually = feeling better!(good to hear) :) Yesterday we had a groundhog and two deer in our backyard. Somewhat surprising if you knew where we lived. I just don't want the deer to discover my garden! And yes...opossums are UGLY!

yay! got my new computer. Now I can stalk your blog again! I didn't receive that book yet, just to let you know!