Well not QUITE famous, but I did get to be part of a little story in the July Redbook! 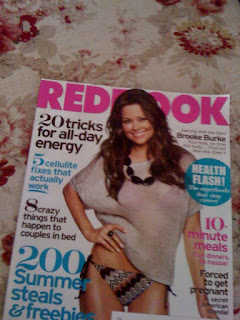 This is just a quick cell phone pic of the article 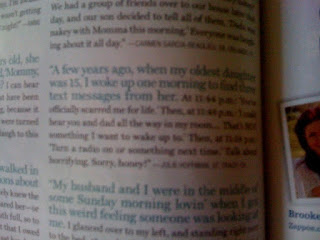 I'm sure Jess will be even more mortified when she sees it haha.
In other news, I went out to dinner Las Casuelas with my two of my friends yesterday. I've been friends with these gals for 12 years now. My one friend can talk for like AGES. It's like no one else can say anything. It really annoys me sometimes. Well pretty much everytime we get together. I still like her and have a nice time when we're all together, I just wonder if she realizes she monopolizes the whole conversation? It's quite exhausting actually.
After I got home I sat down and almost immediately the power went out. When you live out in the country the power goes off a few times a year so we didn't think much of it and all ended up outside because it was hotter in the house than out there. I actually got Scott to mow the lawn and I went around and watered everything while the kids all whined and complained about the bugs and how hot it was. After about an hour I realized that both next door neighbors had power. WTH? The whole block behind us however didn't have power so apparently we're connected to their power line. I decided to call the power company and it said that I was the first one reporting the outage. I'm glad I didn't wait much longer to call. About an hour or so later they came out and replaced the fuse on the power pole and everyone went to bed.
Pretty exciting night!
Pin It
Posted by Julie H at 9:13 AM

I don't mind losing power as long as it's not summer - I need air conditioning in 100 degree weather and 90% humidity. I'm a summer wuss like that. :-)

Yikes! Lucky you called when you did!

OMG..loving the article! HOW FUNNY. Shall I call the tracy press and notify them on the break-out new artist? Jess would DIE!!!!