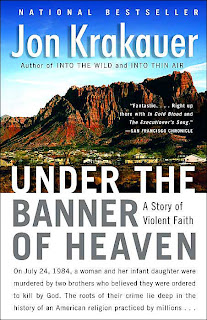 Last night I went to the "Christian Book Club". I almost didn't go because I was tired and didn't really feel like going anywhere. I decided to just go to at least find out what the new book was going to be. The last book was Under The Banner Of Heaven. Which I got from the library, saw how big it was and decided not to read. Only about four people actually finished the book. Here's what it was about
From Goodreads:
In 1984, Ron & Dan Lafferty murdered the wife & infant daughter of their younger brother Allen. The crimes were noteworthy not merely for their brutality but for the brothers' claim that they were acting on direct orders from God. Under the Banner of Heaven tells the story of the killers & their crime but also explores the shadowy world of Mormon fundamentalism from which the two emerged. The Mormon Church was founded, in part, on the idea that true believers could speak directly with God. But while the mainstream church attempted to be more palatable to the general public by rejecting polygamy, fundamentalist splinters saw this as apostasy & took to the hills to live what they believed to be a righteous life. When their beliefs are challenged or their patriarchal, cult-like order defied, these still-active groups are capable of fighting back with tremendous violence. While Krakauer's research into the history of the church is admirably extensive, the real power of the book comes from present-day information, notably jailhouse interviews with Dan Lafferty. Far from being the brooding maniac one might expect, Lafferty is chillingly coherent, still insisting that his motive was merely to obey God's command. Krakauer's accounts of the actual murders are graphic & disturbing, but such detail makes the brothers' claim of divine instruction all the more horrifying. In an age where Westerners have trouble comprehending what drives Islamic fundamentalists to kill, Krakauer advises us to look within our own borders.--John Moe (edited)
So as you can see if you read all that it's kind of deep. No one really "liked" it. I got the idea it was more of a text book to what's wrong with being Mormon. I'd much rather just read something that makes you feel good and/or entertains, wouldn't you?
So after like an hour they finally decided on the next book. I don't really like the way they pick the books here. My other club works much more smoothly. We go in alpha order by your last name and when it's your turn you tell everyone what you picked. These people are so worried that others won't want to read their book they can't even pick on. Like make a decision already! If it's dumb it's not your fault, you didn't write it! 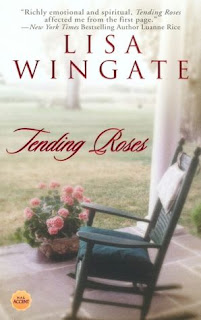 Tending Roses From Goodreads
While living in a remote Missouri farmhouse-and struggling to care for her husband, baby, and aging grandmother-Kate Bowman finds inspiration in the pages of her grandmother's handmade journal...
So this one seems a bit more promising. It's a series too so if it's good I'll have a few more to read.
I still don't really feel like I fit in with this group. It's funny to me listening to them talk sometimes because they seem so out there. Like one gal talking  about how when she reads a book and gets to a part with sex, which she didn't know it was going to have she has to skip through because she doesn't want to read it. Now I don't know about you but usually that's a high point in a book for me ;) I'm such a heathen.
And other people saying how they don't like books with swearing. Now I'm the first to admit that I have a bit of a potty mouth. I don't really think it's such a big deal. It adds flavor.
So, not sure if I'm going to continue going. I just don't seem very bonded with the whole group, although there are a couple people I could see myself hanging out with for a cup of coffee or whatever. A few of them are just so prudish I don't think I'd want to.
Pin It
Posted by Julie H at 8:37 AM