I'm so tired. I really should go take another nap. Yes I said ANOTHER. Although I think I really only slept for five minutes the first time, but I'm not sure. It's hard to sleep with people yelling at video games. And just when I did really fall asleep my daughter came in to ask if I would drive her to her friend's house. SURE. After I get done trying to SLEEP. Sheeh.

I got up this morning and went with my friend to a big wedding dress sale. It was at a place that gives prom dresses for girls that can't afford them otherwise. But today, it was just wedding dresses. We got there at 9:30 and the doors were to open at 10:00. The line wasn't TOO long when we got there. Shortly after it wrapped around the building behind us. 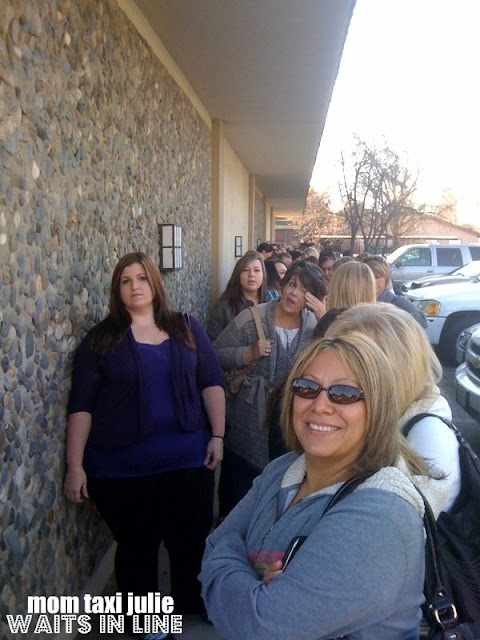 The weirdest thing about the whole deal? I found out the two people standing behind us in line work right across the courtyard from me at work. Talk about a small world! We weren't even in the same city or anything.
So they let us in 12 at a time they said. When we got inside they had the dresses arranged by size. A lot of them seemed like older dresses and I thought maybe they were used (although on that website they said they were new). But for $50? After trying on about 10 my friend found one that she liked enough to buy. I told her even if she decides not to use it she can probably resell it and get her money back.
I actually bought a veil that had a rhinestone base. It's really pretty. For $10 it's worth at least that much.
Last night my girls and I went to dinner and the movies with my Mom. We went to Red Robin for dinner (am I the only one that doesn't really think their food is that great?), then walked across to the movies and saw 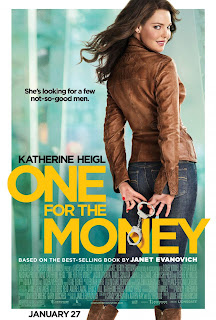 One For The Money.
My Mom and I read all the books and I was really hoping that the movie wasn't going to be a piece of shit. Don't you hate when they take a really good book and ruin it when they make it into a movie? But we didn't have to worry too much because the movie was pretty good! Although, I was a bit disappointed in their selection of Morelli. The guy that played him seemed too old. In my mind he was much cuter and younger :) And I don't know about you but I always kind of pictured Ranger as someone that looked a bit more like The Rock.  And Grandma? I always kind of pictured her like Estelle Getty in Golden Girls.
All in all I thought it was a cute movie. I would go see a sequel.
I thought I was going to go out and have a drink with my friend tonight but looks like she's flaking on me. I have nothing else to live for tonight. Kidding. Kind of.
Pin It
Posted by Julie H at 7:27 PM

Labels: Marissa's Closet, One For The Money, Wedding Dress Shopping

I have always wanted to go to one of those wedding sales! Sounds like so much fun and a little crazy with all those brides! Glad your friend was able to find a dress!

I have never heard of wedding sales here ... ever! What a great idea though.