This has been one busy weekend!

Friday when I got home from work I got the mail and got this AWESOME new bill in the mail. When Scott got in his car accident the hospital charged $62,000 for his three hours in there. He came in through the trauma door so that apparently means you are rich and have fab insurance. While he was there he had a CT scan, a bag of pain meds, some oxygen, a blood test to make sure he wasn't drunk or on drugs and a sling for his arm that was a size medium (obviously several sizes too small). We were both really sick when we got the bill, like physically ill. Our insurance caps out at $10,000 a year per person which of course they took off the top of that but we were left with A LOT.

Several people told me to not pay it and to try to work with the hospital to get it reduced. I called the number on the bill and was sent paperwork to fill out and mail back, and then another request later to send in  our financial information. I sent everything and months later this is our new bill.

Friday night I went over to my friend's house and shivered while we sat on her front porch and had drinks. It's getting really cold now! Well cold for our area anyways. In the 30's-40's at night now. Brrrr.

I was so excited because I went looking for my robe and I found this sweater I forgot I had. My Mom has this big crocheted white sweater that my Grandma Marilyn made her when she was younger. I used to steal it all the time because it was so warm, and like being wrapped around Grandma's arms.

Probably about ten years ago my Mom produced a twin sweater, that my Grandma had made for her friend. The friend had given it back to my Mom when she didn't want it anymore and so my Mom gave it to me. BUT it was smaller than the other one and did not fit. Well guess what?? It's actually probably a little too big but WOOT! Love it! 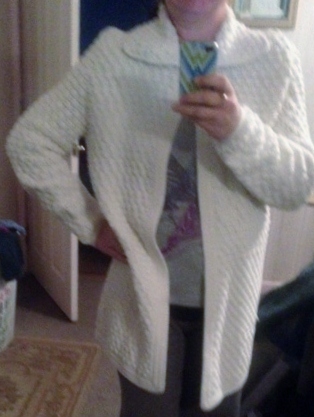 Saturday morning I went out to help trim the oleander bushes. Where I live (it's a private club ran by the members who live here) we have a long drive way when you come in. The driveway is lined with oleander bushes on both sides. I really like them when they are big and full but they are being a bit choked out by burmuda grass and they had a lot of dead branches in them. They had a big work party and so I went down to help. My arms are still sore on Monday from trimming. I called that my work out for the day! 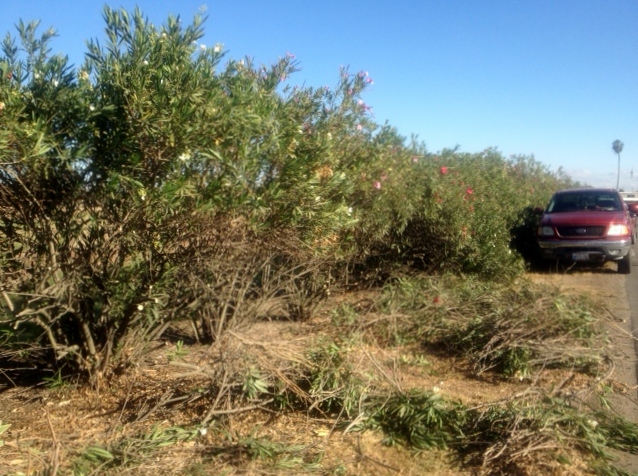 The whole time I was working on them I kept thinking about the book White Oleander and how I should make sure and not put my hands in my mouth. (Great book by the way, I think I might read it again)

I got home in time to take Melissa and her friend to the mall. I ended up staying the whole time and doing some shopping. I was really wanting some boots. I went into Macy's on a whim and they were having a boot sale! Sadly they didn't have enough people WORKING there to keep up with the demand of the people SHOPPING there. I ended up leaving because I couldn't get anyone to help me.

These boots, however, are freaking awesome. I turned them over to see how much they were and I have really good taste. $215 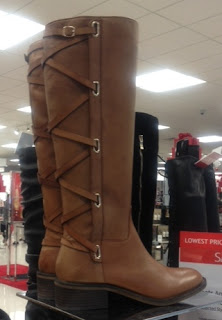 I ended up just getting a cheap pair at Target. They are cute. I want to get a brown pair too so I will keep looking.

Then we went and met some friends at a winery down the road. My friends are members there so they invited us to come for this uncorking/anniversary event. Wine and food, sign me up!

We went in the "cellar" to get our food. Kind of cool. 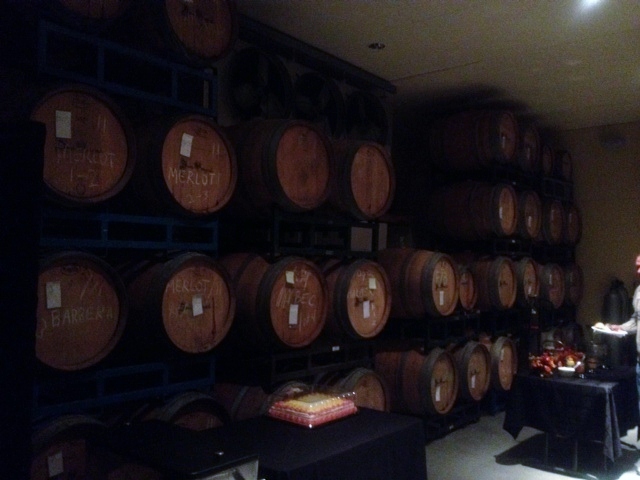 A blurry cell phone pic of us and our friend Craig. 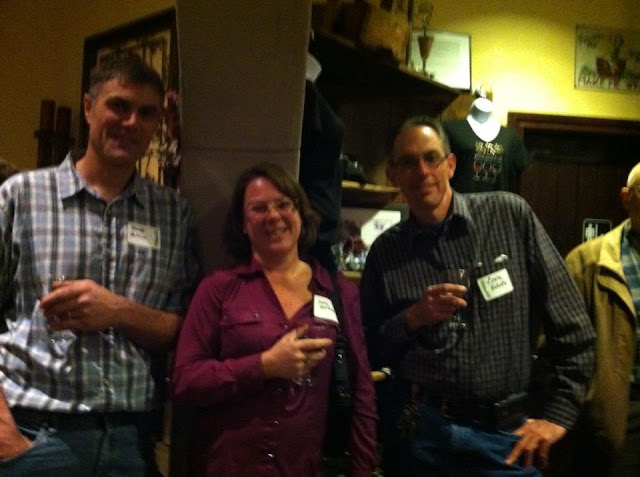 Some items for sale, love the towel! 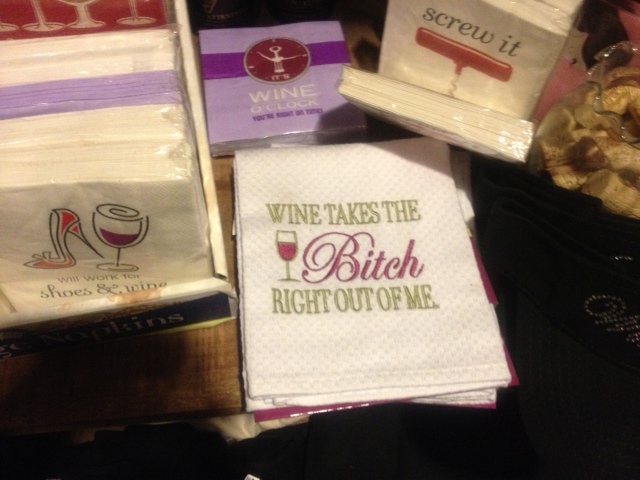 We were done there before 8. I suggested we move on to the bar since we were already dressed and out, so we did. I had a few of these. 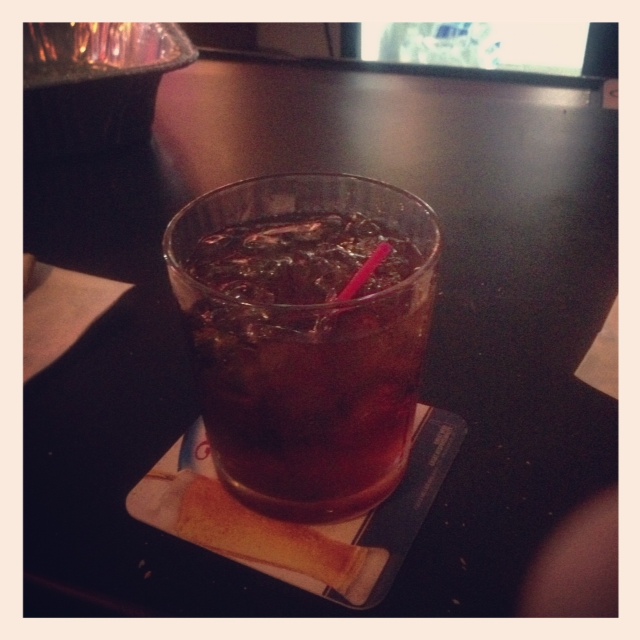 and cracked up that there is now a "bar cat". This declawed cat showed up and has decided it belongs here. It was hanging out under the pool table and sitting on a bar stool. Someone was calling it Kevin after a guy that used to hang out but passed away (he had red hair). Reincarnation? 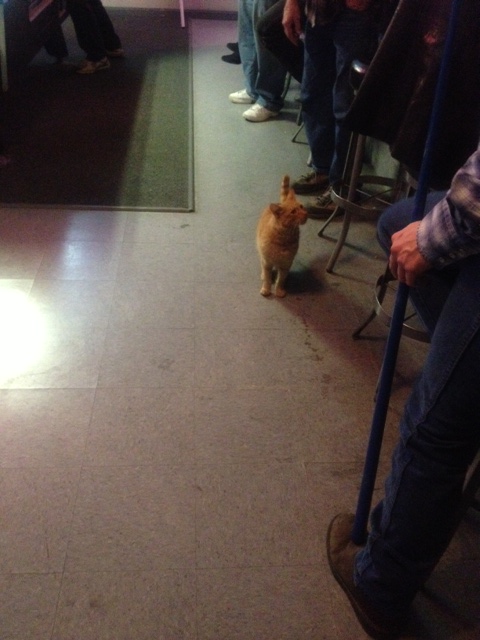 Sunday I met up with a friend to do some shopping. We went to Old Sacramento and ended up eating at Fat's City Bar & Cafe. I got a margarita (totally buzzed off one drink, must have been good lol), the pulled pork sandwich with sweet potato fries and coleslaw and then ordered a "cup" of french onion soup. I ate most of it and I'm still full the next day. It was delicious! 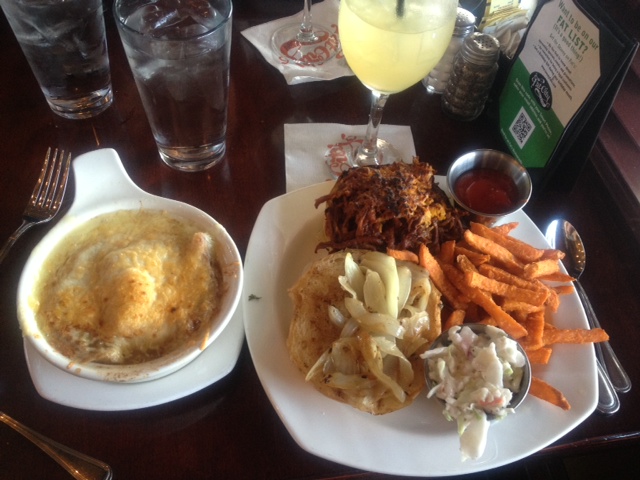 There is a ton of stained glass in there, check this out, it was in the little room we sat in. 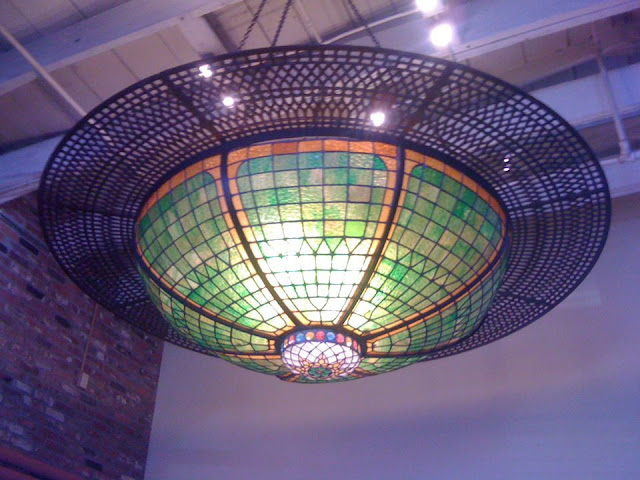 It's huge, probably at least six feet across. So pretty!

After our shopping we went back to my friend's house and watched a bit of Sex &  The City until she had to go pick up her sister. I came home and Trevor wanted to watch a movie with me and I passed out in like 5 minutes. Poor kid, he was disappointed in me I could tell. I cannot lay on the couch to watch a movie and stay awake to save my life.

Today I'm going shopping with some friends (have the day off for the holiday) but I'm feeling a bit guilty going out again since I've been pretty much gone all weekend. I guess I'll get over it eh?

So I work for a health insurance company and I am betting that original total charge is what the hospital charges. Insurance companies negotiate with hospitals to knock down that price...which is why it is encouraged to go to in network hospitals. I am sure your negotiated rate is a MUCH more reasonable price, where you are paying your 20% coinsurance of that... or whatever deductible + percent. .... But anyways... THIS is exactly the problem with the health care system!! Hospitals (and doctors) charge RIDICULOUS prices! If you did not have insurance, they would want you to pay that much... but HELLO why do people not have insurance in the first place? They do not have jobs, or good enough jobs to have insurance, so how on earth could they pay that!? Doctors and hospitals are the ones that need regulation... not the insurance companies! ... Ok end of Rant... maybe... This sort of thing just drives me crazy and is exactly what I work on... The Cost of Medical Care....

I love that the bar has a cat!!